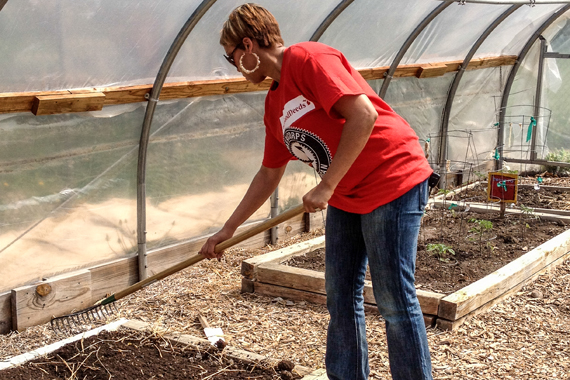 Flint native Tiara Price is a bright, young African American woman with a big smile and a warm heart. It comes as no surprise that she is an AmeriCorps volunteer for the American Red Cross, as she began volunteering as an elementary school student in Flint.

“I can’t imagine not volunteering,” Tiara said, “because it’s so fulfilling. I feel like I have a purpose.” A graduate of Eastern Michigan University, she also volunteers with her sorority, Zeta Phi Beta, and works as a Parent Education Instructor teaching a course to parents who have lost children to the foster care system. If that isn’t enough, she also finds time to serve on the board for A Dream Does Come True, a nonprofit agency that offers young women free prom dresses and an etiquette course. While in high school, she volunteered as a hospital candy striper and while in college, she helped build a park in Ann Arbor with her sorority. Last year, she was a committee member for Flint’s first annual Women’s Seminar. “Volunteering is a part of who I am,” Tiara said. “I have always wanted to help people.”

Often lauded as the domestic counterpart to the Peace Corps, AmeriCorps is a federal program that engages young adults in community service. Volunteers help others and meet critical needs in the community. As an on-call volunteer, Tiara anxiously awaited a summons to Moore, OK, a town devastated by an F5 tornado in May. While she hates to see any disaster occur, she said she wanted to be there to help in any way possible. “It’s one thing to see it on the news, but being there, hands on, would be an unforgettable experience,” she said. Because of its active work at a community level, AmeriCorps has expanded to more than 80,000 members since its creation in 1993.

Tiara hopes that her volunteer work will help her gain future employment as a mental health and substance abuse counselor. “Committing to your community as an AmeriCorps volunteer makes you stand out. Plus, it’s a very rewarding and honorable thing to do,” she stated. AmeriCorps volunteers work with organizations such as the American Red Cross, Habitat for Humanity, Big Brothers/Big Sisters, and Boys and Girls Clubs, as well as many other national, state and local nonprofit organizations. Tiara has made a one-year commitment, and spends her time as a Volunteer Recruitment Coordinator at the American Red Cross, a job she finds very rewarding. She particularly remembers recruiting a newly-retired, 70-year-old woman who had recently lost her husband. Volunteering gave her a new purpose. “It was so fulfilling to watch her become a volunteer. It warmed my heart,” Tiara recalled. Having been born and raised in Flint, Tiara finds it especially fulfilling to give back to her hometown. “Flint will always be my home. I love my city. There are so many people involved in good things here,” she said.

Overseeing the AmeriCorps volunteers at the Red Cross is Lynda Waldron, Volunteer Supervisor. AmeriCorps is a very popular program that provides volunteers with a small stipend during their service and an alternative pathway through which young people can enter the workforce. “It’s a great program,” Linda says. “It’s amazing how the volunteers devote so much time to helping their neighbors.” There are many volunteering options at the Red Cross – some people get involved because they have been helped by the Red Cross in one way or another, or because they want to have something meaningful to do. Linda began as a volunteer herself after being laid off from a full-time job. She was just looking for something to fill her time, and now she is a paid staff member who loves what she does. “This is exactly where I need to be,” she said.

Becoming a volunteer is a simple process, involving only an application and background check. “We try to make it as easy as possible,” says Linda. The Red Cross also tries to find the right fit for each volunteer in its four areas of service: responding to disasters as part of the Emergency Service team; teaching Health and Safety Classes, including CPR, First Aid, and Babysitting Classes; being available when troops are getting ready to deploy in the Armed Forces Unit; and talking about what the Red Cross can do for family members. Red Cross is the only organization allowed to reach out to the military. Volunteer options are also available in Blood Service: registering donors and drivers, and helping out at blood drives.

Tiara has enjoyed her recruitment efforts for the American Red Cross, and although her one-year stint will end in December of this year, she says that her dedication to community service will never end: “It’s in my blood,” she smiled.

For more info about volunteering, contact the Red Cross.