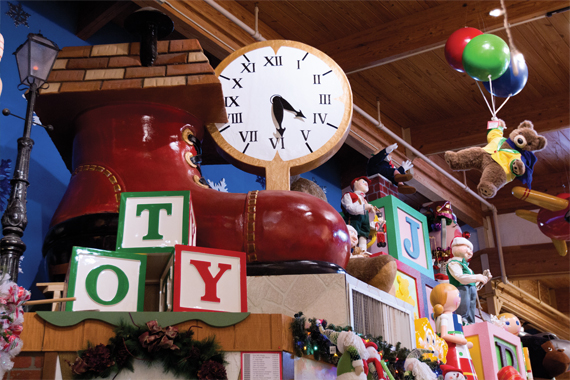 The wonder and joy of the Christmas season are upon us. It’s a magical time of year: good cheer is spread and angels sing, “Christ our savior was born!” At Bronner’s CHRISTmas Wonderland in Frankenmuth, that feeling is expressed all year long. When children walk through the doors of the world’s largest Christmas store, the wonder and excitement in their eyes is visible, and many think, “This must be where Santa Claus lives!” And he does. In fact, 14,000 children visit Santa Claus at Bronner’s from the day after Thanksgiving through Christmas Eve every year. The business was founded by Wally Bronner in 1945 and he was forthright about his faith and about keeping “Christ” in Christmas, a sentiment still cherished at the establishment today.

Wayne Bronner, Wally’s son, gave My City Magazine a tour of the showroom and spoke about the rich history of the family-owned business, which is a pillar of the city of Frankenmuth. A warm smile lit up his face and he wore a Santa Red suit jacket and Christmas tie, just as Wally always did, carrying on the legacy left to him by his father. Wally’s wife Irene is the owner/manager, and six family members are involved in the day-to-day operations of the store, which employs more than 600 people. Wally, who was beloved by his employees, family and friends, and the entire community, made his trip to heaven on April 1, 2008. Wayne is now the company president/CEO. “I got the job because I have the grayest hair,” he joked.

Wally didn’t start out selling Christmas decorations, Wayne reports. He was a sign painter, and began by operating a sign-painting business in his grandfather’s basement. He was decorating a window for the holidays in a Bay City hardware store when a man from the city of Claire came in and asked the store’s owner if he sold Christmas decorations. The store owner told him to talk to the man trimming the windows. From that conversation, Wally was hired to hand paint Christmas panels for the city of Claire. “That was the beginning of the Christmas decoration business,” Wayne smiled, saying that because Christmas items were in such demand, Wally was able to make the career transition from sign-painting to decorations.

According to Wayne, Bronner’s was first located in an old schoolhouse in downtown Frankenmuth. He said the town thought his dad was “half crazy” because at that time, Frankenmuth was not the tourist town it is today – just two chicken restaurants and a stop sign. But Frankenmuth was a nice town, clean and prosperous, and had begun to distinguish itself with its German culture and roots. It began attracting more tourists when Zehnder’s Restaurant and the Bavarian Inn became famous:
the Bavarian Festival, which is still held annually, began to draw a large number of visitors to the area. The two restaurants and Bronner’s came to be known as “the Big Three” of Frankenmuth, says Wayne.

As the Christmas decoration business became more popular, Wally needed a sales room, so in 1996 he built a new building in town. The store did so much business that it created big traffic jams, and doormen in red coats would only let customers into the store after others were finished shopping. The third relocation took place in 197l to the Bavarian Corner, and the fourth and current salesroom opened in 1977 when Wally learned that M-84 was going to be relocated. The city manager at the time advised him that he should buy some property on the south side of town; there were 45 acres available, but the farmer who owned it said he would sell it, “all or nothing.” So, Wally bought the entire 45 acres, which is now home to Bronner’s CHRISTmas Wonderland. Several expansions have since occurred: Christmas Lane
is now a half-mile avenue with 100,000 lights, and the seven-acre showroom contains thousands and thousands of Christmas items.

Bronner’s is open for business 361 days a year. “We’re a little lazy; we need four days off,” laughed Wayne. Their busiest day is the Saturday after Thanksgiving, and 50,000 people come through the doors that weekend. People from all over the country and Canada visit the store in search of the perfect decorations.

There are actually four divisions to the business, explained Wayne, the Retail Store, Catalog and Internet Sales, Exclusive Product Design, and a Community Sales Department that provides Christmas decorations on a larger scale to DDAs, shopping malls and stores all across the country. Bronner’s has provided Christmas decorations for 50 movies, including Jingle All the Way and Christmas with the Kranks. “We have a reputation for doing that,” boasted Wayne. A giant reindeer and sleigh were needed for one movie that was filmed in Saskatchewan, Canada. “We got it to them,” he remembered. Wayne also remembers that on December, 15, 1976, Bronner’s received a telephone call from Hollywood. It was movie icon John Wayne himself, asking for “the best Santa suit you got.” “We shipped it to him,” laughed Wayne.

A visitor can spend hours looking at the merchandise and displays, including over 500 styles of Nativity scenes and decorations and gifts from 50 nations. Approximately half of the glass ornaments are Bronner’s own designs, handcrafted exclusively for Bronner’s by global artisans. Additionally, at least half of the merchandise sells for less than $10, making it very affordable, said Wayne. But the most popular item sold at Bronner’s is the “shiny red glass ornament,” which can be personalized. Bronner’s staff personalizes 400,000 ornaments annually. The personalization started when Wally gave all of his staff a red ornament hand-painted with their children’s names as gifts at the company Christmas party. The staff was so impressed they decided to personalize ornaments in the store, which are now sold in all colors. Christmas stockings are also personalized on site.

According to Wayne, it is important to the Bronner family to focus on the real reason for the season: the birth of Christ. That is why they are so proud of the Silent Night Memorial Chapel that was built on the Bronner property in 1992. “It’s the first thing you see,” smiles Wayne. The idea took root when Wally and Irene visited Oberndorf/Salzburg, Austria in 1976. The world’s most favorite Christmas hymn, “Stille Nacht” (“Silent Night”), was first sung at the chapel there, accompanied by a guitar since the chapel’s organ was not working. Wally decided he wanted to replicate the chapel. Along a lamppost-lined walkway, plaques display the words to Silent Night in over 300 languages. Every year on Christmas Eve, Wayne’s brother-in-law and a guitarist lead visitors in singing “Silent Night” at 3pm in celebration of Christ’s birth, sharing the message of Christmas with all who attend.

A visit to Bronner’s is a beloved tradition for many families, especially during the holidays. “It’s a thrilling business,” said Wayne. “People, who are facing everyday turmoil come into Bronner’s CHRISTmas Wonderland and hum along with the Christmas music. Christmas brings out positivity in people – family, love, caring and giving. Bronner’s helps make that possible.”

Are you interested in purchasing photos from this story? Go HERE and select the “Bronner’s CHRISTmas Wonderland” category.