Barely containing his enthusiasm, A.B.C. Hardy was waiting. He had to talk with Billy. He had seen the future and Billy Durant needed to know what it held for the Durant-Dort Carriage Company. Hardy fidgeted with the hat on his head as the doorknob turned and Durant stepped out of his office. “Billy,” he stood and said, removing his hat. “Hello, Alexander,” said Durant as he shut the door behind him. “How was Europe?”

“That’s good,” Durant said as he turned and began walking down the stairs to the production floor. Hardy threw his hat back on and followed, struggling to keep up with his quick walking boss. “Look Billy, we really need to talk – it’s important,” he said. “Is it?” Durant answered, not breaking his stride. The floor foreman approached and Durant stopped to sign a paper without really looking at it. Hardy caught up. “Billy, listen!” Hardy grasped Durant’s arm in an effort to keep him rooted for a moment. The foreman thanked Durant and moved away. Durant turned to Hardy asking, “Okay, what is it?” Finally holding Durant’s undivided attention (a hard thing to do for the fast-talking Mr. Durant), Hardy held his breath for an instant then blurted out a single word, “automobiles.” “Auto-what?” Durant asked.

“They are the future, Billy. You should have seen it. They are all the rage in Europe. We need to start working on them here.”

“I’ve heard of them,” Durant replied. “From my understanding, they are fleeting things. Dirty and constantly breaking down. They can stay in Europe.”

“Alexander,” Durant put both hands on Hardy’s shoulders and looked him in the eyes. “Nothing can replace the Carriage Factory. We have an empire here. We will be fine.” With that, Durant nodded to Hardy, patted his shoulders, turned and walked toward the exit door. Hardy stood stunned, feeling absolutely sure that the automobile would someday ruin his friend. Why couldn’t he see that? “Get out of the carriage business before the automobile ruins you!” he shouted. Still walking, Durant looked over his shoulder at Hardy and said, “if you’re so sure, maybe you should be the one to start.” Durant left the building. “Maybe I will,” Hardy whispered. 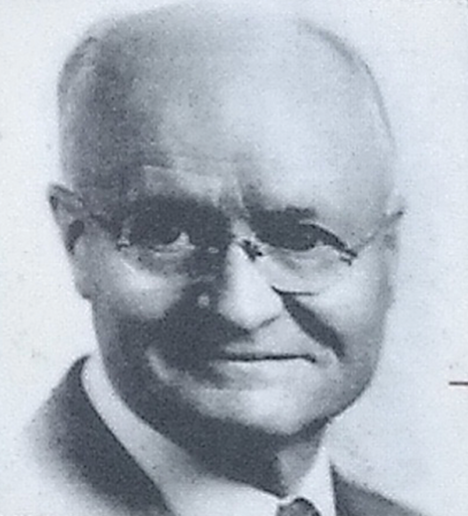 Alexander Brownell Cullen Hardy (known as A. B. C. to his friends) was one of Flint’s vehicle pioneers, having a hand in the success of the Durant-Dort Carriage Company, General Motors and Chevrolet. He was the first in the city to mass produce an automobile (the Flint Roadster) and was forever Billy Durant’s right-hand man. Content to stay in the background, Hardy’s work was overshadowed by the auto production giants of history.

A.B.C. Hardy was born in Ypsilanti in 1869. His parents died young and by 18, he was forced to make his own way in the world. He traveled to Genesee County and took a job as bookkeeper for the Davison Road Cart Company. His substantial business acumen was evident as the company grew to become the Wolverine Carriage Company, with Hardy as manager. In 1896, Hardy met Billy Durant for the first time and the two hit it off. Ever with an eye for talent, Durant tapped Hardy for a position heading the Diamond Buggy Company branch of Durant-Dort. Hardy continued to show promise as a manager, turning 150% profit in five months and, after J. Dallas Dort took his leave of absence from the company in 1898, Durant named Hardy manager of Durant-Dort.

In 1899, Hardy married Eusebia Florence Bates at St. Paul’s Episcopal Church in Downtown Flint. The day was joyous for all as a large crowd turned out for the beloved carriage company manager; however, Hardy was vexed. The job working for his ever-demanding friend was getting to him. His nerves were shot and when Dort returned to town in 1900, Hardy handed over the keys to the business and took his wife on a belated honeymoon to Europe. While there, he toured the country and studied automobiles and their production in depth. Reenergized, he returned home and immediately set out to convince Durant to invest in the automobile as the future of world transportation. His plea fell on deaf ears.

The next year, Hardy was busy working to create his own automobile company – Flint’s first. After a multitude of local bankers denied his requests for a loan, he invested $5,000 of his own money (over $150,000 dollars in today’s currency). He set up the Flint Automobile Company in the former Abner and Frank Randall building located at 602 N. Saginaw St. near Third Avenue. He quickly began construction of Flint’s first mass-produced automobile – the Flint Roadster. Priced at a modest $850, the car used axles from the Weston-Mott Co. in New York and bodies from W. F. Stewart. With a Champion transmission,its engine was capable of 8hp with speeds up to 30mph. It was engineered such that the steering wheel could be swapped to either side of the vehicle. The Roadster was marketed with the phrase, “And the road rolls up behind like a dusty ribbon.”

Production and sales went slow for Hardy. He was building a production facility from the ground up and, after completing just 52 cars, he ran into trouble with the Association of Licensed Automobile Manufacturers who were armed with the infamous Selden patent. They accused Hardy of running afoul of their patent and demanded $50 for each car sold. Hardy instead decided to dissolve the company. While the Flint Automobile Company may have been a failure, it was significant in Flint for more than being the first. While in production, Hardy received numerous visits from James Whiting, a man who also saw the future potential of the automobile venture. Whiting would go on to start a company all his own.)

Dejected, Hardy left Genesee County and took a job managing a small carriage company in Waterloo, IA. He would spend several years there until receiving a message from Durant in early 1908. He was needed back at home. Durant was into something big.

Durant had established General Motors and was caught up in a whirlwind of acquisitions. He was buying up every auto company in sight and he needed Hardy’s help to keep it all organized. Hardy jumped aboard and hit the ground running, but Durant soon hit a wall and was ousted from GM by Chase bankers. Hardy stayed aboard, working with the bankers to wind up operations of GM subsidiaries that the bankers lopped off. After a time, he was named general manager of the Marquette Motor Company under the GM umbrella.

In 1912, Hardy left GM to join his good friend Billy Durant as head of the Little Car Company. “Our plan was simple to the point of innocence,” Hardy said of the venture. “We took a small motor, had it revamped and improved, and put it into a small racer for sale at $650.” The Little cars sold well and those sales were instrumental in the success of Chevrolet. In 1913, the Little Car company was dissolved and Hardy was named vice president and general manager of Chevrolet. Durant, of course, was then able to buy back General Motors.

During Durant’s second run at GM’s helm, Hardy was tasked with creating the Frigidaire organization in addition to his other duties. Hardy was present when in 1921, Durant was ousted again from GM, this time for good. Hardy did not follow his former friend and supervisor. He stayed with the company and was named president and general manager of Olds Motor Works (Oldsmobile) the same year. In 1925, he retired from the transportation business.

Alexander Brownell Cullen Hardy died in 1946 at the age of 77 and was buried in Flint at Glenwood Cemetery. He was fiercely loyal to his friends and instrumental in the birth and growth of Flint. Never a “yes” man, he consistently argued Durant down from some of his most ludicrous ideas. Ever in the background, Hardy was the man who kept the engines of Flint running.

In 1879, patent lawyer George Selden filed a patent application for his invention of a one-cylinder engine and its use in a four-wheeled car. He continued to file amendments to his patent which stretched the application process to a length of 16 years. His patent was eventually granted in 1895.

Selden never had any intention of producing an automobile and instead, banked on his patent to make money. Selden and his partner, William Whitney, worked together to collect royalties from auto manufacturers all over the country. They successfully negotiated a .75% royalty on all cars manufactured by the Association of Licensed Automobile Manufacturers. A majority of manufacturers opposed Selden’s claims of infringement and took him to court (Durant ignored Selden completely.)

Henry Ford made it a point to end Selden’s claims and took him to court in a battle that would last for eight years, with Ford stating, “It is perfectly safe to say that George Selden has never advanced the automobile industry in a single particular … and it would perhaps be further advanced than it is now if he had never been born.” Initially, the case was found for Selden but Ford appealed. Ford won by arguing that the engine used in automobiles was not based on the engine claimed in the patent. Selden was devastated and eventually forced to produce a vehicle to retain his revenue stream. The Selden Truck Sales Corporation survived past Selden, who died in 1922.