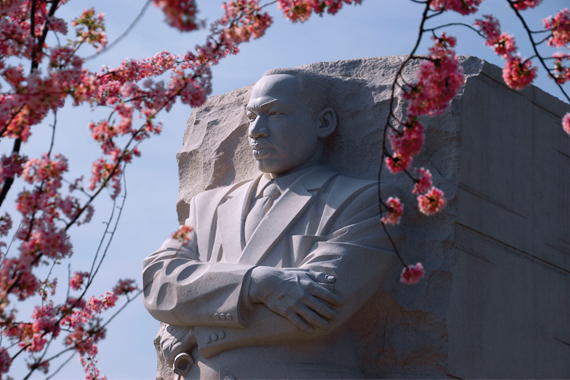 It was January 16, 2012 in Washington D.C. The sharp edge of the cold winter wind proved smart enough to pique even the most seasoned Michiganian to the bone. But I weathered it. I marched on – bundled up and bearing the cold – for one reason alone: to see the monument.

“Come on, Mark!” I shouted to my friend in tow as we crossed another busy D.C. street. “It’s just ahead!”

Using my smartphone as our guide, we watched as the digital location dot inched closer and closer to the digital destination flag. Mark is one of my closest friends. He and his wife were the light that lit my days in one of the darkest seasons of my life. I owe him my life, and there he was, walking beside me as always, during said dark season, bearing the cold with me for the same one reason as I: to see the monument.

As we reached the foot of the final hill, we descended upon our goal. Before us stood a man chiseled out of granite and standing 30 feet tall. The man was Dr. Martin Luther King, Jr.

Just a few blocks away from the Martin Luther King, Jr. Memorial lies the field of the National Mall. Fifty years ago, the National Mall teemed with Blacks and Whites who refused to let the federal government dictate that their children and grandchildren must conduct their lives in the reprehensible “separate but equal” conditions outlined in segregation policies, and by the mercies of heaven, Mark and I stood abreast before the memorial as beneficiaries to the cooperative efforts of our forefathers who stood abreast King in 1963.

Since the election of President Barack Obama, we as a nation have had the tendency to regard his nomination as the apex realization of Dr. King’s dream, but I believe we would be remiss if we did not equally consider having the freedom to have lifelong, loving relationships with persons of different ethnic backgrounds, free of government intervention, as an apex realization. Are we taking this inherent and basic freedom for granted today? It was not always granted to us. Dr. King dreamt of the day when “little black boys and black girls will be able to join hands with little white boys and white girls as sisters and brothers.” The dream is not cemented in any one monument or moment. It lives in us daily.

At the beginning of this year, I received a phone call from Mark. He led on as if he hadn’t much to say, but as he listed a host of mundane things going on in his life, he then casually joked, “And you’re going to be a bluncle” – a clever, lighthearted portmanteau of the words black and uncle. I tell you, I couldn’t be happier. I will love his child as my own and I am thankful to live in a society where the great majority of people welcome that idea without hesitation.

Here’s to a lasting, living dream. Thank you, Dr. King.