At The Good Beans Café in Flint, in the back room around the corner, away from the hustle and bustle of the morning tea-and-coffee crowd, you can often find Erik McIntyre sitting with a pair of ornate headphones on, drinking a cup of joe with a stack of books before him. Next to his chair is a backpack containing all the things a man needs for a life on the road, and a case holding his guitar – a constant companion.

For McIntyre, traveling, teaching and playing music have been his passions since he first picked up his sister’s cast-off guitar at the age of 12. He holds a degree in Music Technology from Mott Community College and has recently graduated from Oakland University with a degree in Writing and Rhetoric with minors in General Music and Jazz Studies. He has traveled throughout the States and Canada, playing solo and with a multitude of bands. His most recent stop landed him back in Flint, where he was recently hired as the new guitar instructor at the Flint Institute of Music (FIM). 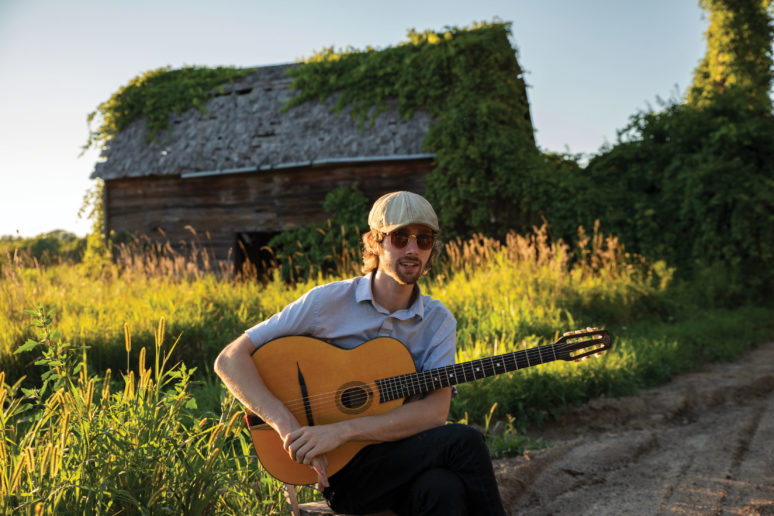 “I started at FIM in February and I really love it,” he says with a smile. “I’ve been teaching for a few years now and working there is great. It’s a little more impressive than places where I worked in the past. I can go in there and do my thing, it’s pretty independent.” McIntyre loves teaching students and he certainly has the experience for it. College degrees aside, he has played at venues from Canada to New Orleans and with so many bands, he admits it’s hard to keep track of them all. “The first band I was in that actually felt like a legitimate band was back in high school,” he remembers. “When I was a senior, some friends and I threw together a drum ensemble for our school talent show and we won. We called ourselves the King Kong Tribal Orchestra and ended up playing shows around town. It was the first time I felt that maybe playing music was something I could do, and it made me realize how much I love playing music with other people. It’s much more fun than playing solo.”

He is a veteran of style and feels at home with Americana, country, blues, swing, rockabilly and improvisational jazz. As a young man, he found musical inspiration from older blues guys such as Robert Johnson, Elmore James and Muddy Waters – but when he was 18, he found one of the biggest influences on his sound and playing style. “I went to Jellybeans and picked up an album of Django Reinhardt. I recognized some names of the tunes on the album and I gave it a try. At first, I wasn’t sure what to think about it, but I knew there was something special there,” he recalls. “Over the past ten years, Reinhardt is the guitarist I keep going back to.” 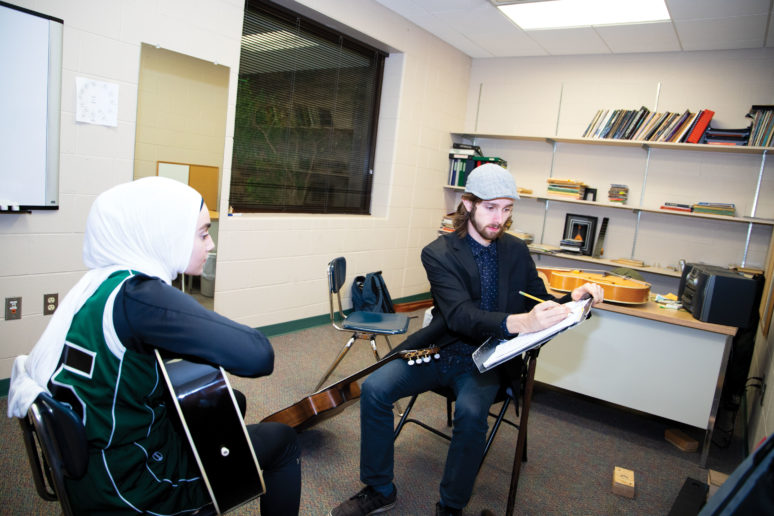 Erik McIntyre and his student, Tesneem Aboudane, at FIM

McIntyre further refined his sound while living in New Orleans with AmeriCorps for a couple of years. “When I was in the city, I just jammed with some people,” he says. “I learned a lot there.”

Throughout his travels and experience, it was only recently, while at Oakland, that he became convinced he could play and teach music on a more stable, professional basis. His playing increased, his teaching increased and his learning continued. “Right now, I’m a regular member of two established bands, the Aston Neighborhood Pleasure Club and the Theatre Bizarre Orchestra,” McIntyre shares. The Aston Neighborhood Pleasure Club was started by his friend, Josh James. The five-piece band plays primarily jazz and swing reminiscent of the Squirrel Nut Zippers and the Cottonmouth Kings. The Theatre Bizarre Orchestra is much bigger. It is the house band for the Theatre Bizarre in Detroit – a 15-piece jazz and swing band that performs with burlesque dancers and costumes. “I also have a new project called Smoking Dandies,” McIntyre adds. “The core of the band is all strings – two guitars, upright bass and violin. Our repertoire is always growing, but it’s primarily music of the ‘20s, ‘30s and ‘40s. We’ve played in Flint at Tenacity Brewing and a few places around Fenton.”

“I genuinely believe everyone can benefit
from learning a little more about music.”

When playing with others, McIntyre relies upon the lessons he has learned and his talent for improvisational jazz, which he says most people misunderstand. “People sometimes think that jazz musicians will just get up and play random stuff. There is a structure to it – the musicians really just elaborate on that structure,” he explains. “Basically, we are playing a theme that is the melody of the tune, we then make up variations on the spot. Sometimes, when I have a really good rapport with the band members, the improvisation can have multiple levels. Or, it can be a collective thing – the entire band makes up an arrangement on the spot – not because it was written out, but because someone gave someone else a look.

“I really like the combination of structure and improvisation. It has to be the right balance. Too much of either and the message of the music can suffer,” he goes on. “I picked up a great definition of music from a guitar player I met in New Orleans. He told me, ‘there’s two parts to music – the mus(e) and the ik. The ik is the mechanical aspect of things, the technical aspect. The mus(e) is the creativity and improvisation.’ What I try to do in my teaching and playing is create a balance of both. Too much technique can take away from the fun of music; but not enough can inhibit potentially beautiful ways of being expressive and connecting with people. Music is a constant ebb and flow of those two things.” 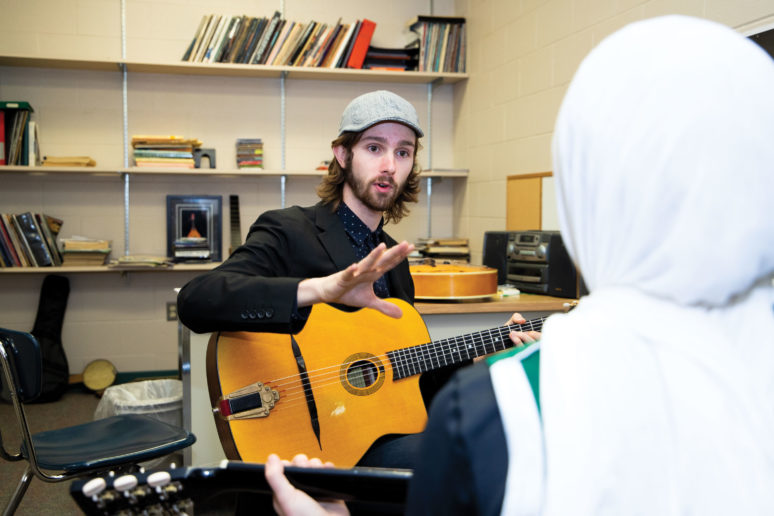 When teaching, McIntyre stresses a blend of technical ability and exploration. He tries to make it fun and loves to see a student really start to believe in themselves and their ability. “If I feel that my student is enjoying themselves and practicing, not because I tell them to but because they feel it’s worth it, it’s a great feeling,” he shares. He believes that music truly is for everyone at any age. His youngest student is six years old and his oldest is in his seventies. “A lot of people seem to feel like they just aren’t naturally talented enough to learn an instrument. But when I reflect on my own development and that of musicians I look up to, I realize that just having a strong desire to play and learn about music is really what propels people forward in their musical endeavors,” he continues. “You do not have to be a prodigy – but how can you know what you’re capable of if you don’t try? For me, what started as something that piqued my curiosity just enough to start tinkering has become an inseparable part of my identity. I genuinely believe everyone can benefit from learning a little more about music.” McIntyre encourages beginner students to think about why they want to play guitar and what they really like about music. He stresses that it does take discipline and effort, but is also great fun. Why a person plays can be the best motivator to stick with it. 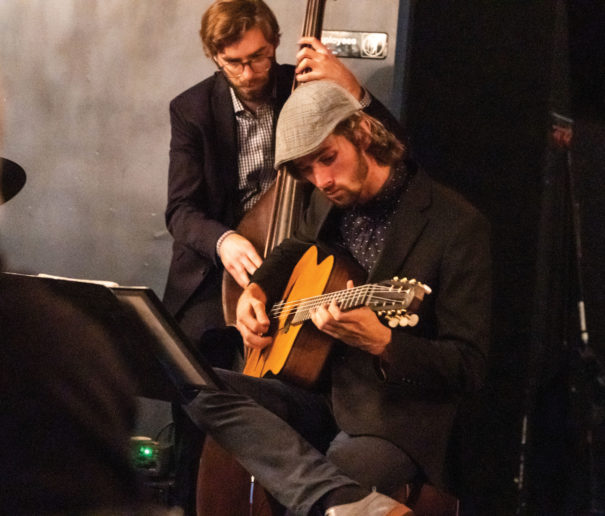 McIntyre says he will never stop playing. Someday, he would love to play in Nashville or in Preservation Hall in New Orleans with the Preservation Hall Jazz Band. “It will be really cool to play with Tom Waits someday and I know he’s getting old, but I would also love to play with Bob Dylan,” he says with a smile. “One of these days, hopefully, I’ll play at the Django Reinhardt festival in France.”

If you, your child or someone you know would like to learn to play guitar, at any level or any style, email Erik McIntyre at rikmacmusic@gmail.com or contact the FIM. If you would like to hear his music, Aston Neighborhood Pleasure Club and the Theatre Bizarre Orchestra are available on iTunes and Spotify. Check out the Aston Neighborhood Pleasure Club’s new album “Live at Howe’s Bayou” and the new release for Theatre Bizarre Orchestra, “These Are My Friends.” Hard copies of each album are available, just contact Erik McIntyre.