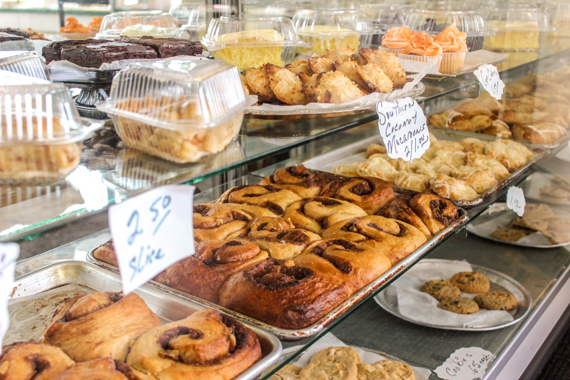 It is easy to stand at the corner of Court and South Saginaw Streets, look due north toward the Flint River and think the city blocks in view represent the whole of Downtown commerce. Indeed, many of the new Downtown shops and restaurants have storefronts that face South Saginaw St. between Court and Kearsley; but Downtown renewal has been happening for longer than the past five years, and it encompasses more than just the old bricks. Should someone stray off the beaten path of South Saginaw, he might happen upon several other shops that have also become staples of the Downtown revival process. In particular, if one followed a heavenly scent down East Third Street from South Saginaw, he would discover a certain bakery just before Brush Alley.

Rolls-R-Ready is a Downtown Flint bakery known for its signature cinnamon rolls, wedding cakes and daily lunch specials. Evelyn Harrison opened at 111 East Third Street in 2003 when very little was happening Downtown. “Everyone asked me why I wanted to come Downtown,” says Harrison, “but this was where I wanted to be.”

Rolls-R-Ready had humble beginnings, but has grown tremendously in recognition over the years. Harrison describes herself as a “lifelong entrepreneur.” She earned her first quarter at 12 years old, and considers this the moment when she became an entrepreneur. Harrison was raised in Arkansas with very little. Her parents would give her and her siblings 25 cents for a school lunch, but a hot lunch at school cost 35 cents at the time, so in order to give her siblings the extra ten cents needed to afford the hot lunch, Evelyn began offering eyebrow-shaping to neighborhood women.

This work ethic and a desire to earn money doing what she enjoyed remained in Harrison throughout her childhood and into adulthood. After her family moved to Michigan, Harrison graduated Flint Northern High School in 1969 and began working in the shop for General Motors. During her early twenties, she would frequent Ann Arbor, and after seeing young adults at the University of Michigan gathering in old storefronts to speak out against the Vietnam War, Harrison got the idea to have her own small business. She described the transition from factory worker to entrepreneur as such: “General Motors was very good to me, and I worked there for eight years, but I knew I didn’t want to work at the same place for 30 years. So I moved myself to third shift and enrolled in a school of cosmetology. After finishing school, I opened my own salon called LaShawn’s Hair Center on Detroit Street before it became Martin Luther King Avenue.”

Harrison would spend eight years in her salon and a total of 23 years in cosmetology. She won several awards and competitions as a hair stylist before she decided to “retire” from cosmetology in 1994. With a waning interest in cosmetics but a remaining entrepreneurial spirit, Harrison got the idea to start a baking business after seeing an ad for a cake-baking course being held in Swartz Creek. Instead of resting on her cosmetology laurels, Harrison saw a business opportunity, but this time she saw the venture as a natural extension of who she is.

“I come from a long line of southern cooks,” says Harrison. “I was born into this, but I just never looked at baking as a business.”

Harrison went on to study Baking & Pastry Arts under Executive Chef David Miller at Mott Community College and in time, she brought her craft to Downtown Flint. From there, Rolls-R-Ready became a bit of a hidden gem in the city. Since orders can be placed online, there is a growing interest outside of Genesee County for Harrison’s “Best Buns.” She has shipped her signature cinnamon rolls to Maryland, Washington D.C., Chicago, California, Tennessee, Arkansas, and Iowa. She was called upon by last year’s Michigan-based presidential campaign to cater a roundtable meeting attended by Major Cory Booker of Newark, NJ. Harrison laments that although her craft is well recognized outside of Flint, Rolls-R-Ready goes virtually unknown in town, the majority of her recognition coming from outside of Genesee County.

Perhaps this lack of local acknowledgment will change in the next generation as Harrison prepares to hand the reigns over to her grandson, Derrick Black. At just 18 years old, Black is ready and willing to take the helm at Rolls-R-Ready. “I didn’t originally picture myself doing this,” says Black, “What 18-year-old Flint kid says, ‘I’m a baker’? But it comes naturally. I get a good feeling when I bake something, and I know that what I’m capable of doing in marketing and advertising will help the company do well.” Harrison says that Black is the lone family member willing to put in the work necessary to keep the business going, and that were it not for him, she would close up shop. She has required him to complete two years of training at Mott Community College’s Culinary Arts and Management program before he can take over, which Black is excited to start this fall.

For Black, this business is a major step in the right direction, one that might afford him the opportunity to pursue other projects he has in mind for the future. Black says he got into a “little trouble” a few years ago, and felt he was “at the end of his rope” when he realized that the one thing he avoided most—baking at his grandmother’s shop—was the one thing that he needed to do. With baking before him and the past behind, Black would like to eventually open a “safe spot” in Flint for teens to go to and hang out on the weekend. “Whenever people see teenagers hanging out together, they think that there is going to be trouble,” says Black, “I would like to change that belief.”

It is heartwarming to see a local Flint business and ten-year Downtown veteran shop kept in the family and thus kept alive for all of us to enjoy. It is also exciting to see a young entrepreneur who has decided to not only undergo college training and stay in Flint, but also to maintain a business as motivation doing so. Derrick Black is the future of business in Flint, and as often as many in town decry the lack of young entrepreneurs, those same people should be willing to support a young up-and-comer. It does not seem too extreme to call Black an anomaly among his peers, and such a title might suit Black well since Rolls-R-Ready is a bit of an anomaly among Downtown shops. So if specialty baked goods are your thing, be sure to visit Rolls-R-Ready and enjoy a chat with an inspiring grandmother-grandson duo while you’re there.

Are you interested in purchasing photos from this story? Go HERE and select the “Rolls-R-Ready” category.