“The keeping of bees is like the direction of sunbeams.”
– Henry David Thoreau

Jim Withers’ day is filled with passion for bees. A beekeeper for the past nine years, he can talk for hours and hours about the subject he loves. 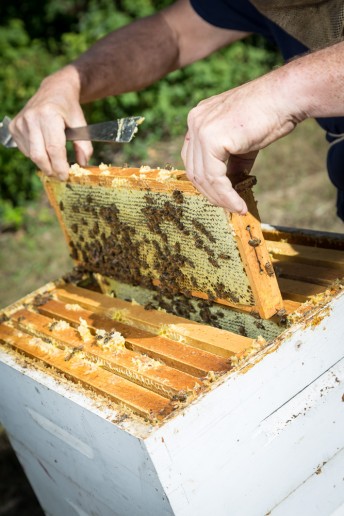 In 2006, Jim retired from General Motors at 50 years old. He did a lot of amateur bicycle racing, training by riding as many as 200 to 250 miles a day. After the grueling workouts, he needed something to boost his energy level. “I discovered that honey-lemon water was the best energy replacement,” he says, adding that he used a lot of honey, which is expensive. So, he decided to make his own.

“I started out with six bee hives, and began studying and learning about bees,” he says. “I became completely fascinated!” Now, he has around 140 production hives and 60 nucleus hives, which are used as a start-up for a colony (nucleus hives are smaller bee colonies created from a larger colony). The reason the hives are so spread out is because they need to be located where there are many blossoms, Jim explains.

Along with his wife, Lee, they are now the owners of Withers Mountain Honey Farm, with 16 apiaries at different locations in Genesee County and West Branch. They live at the farm and sell the honey from their home. The farm was once an apartment building, and the Withers use one of the apartments for bottling the honey.

Jim has apiaries at Porter’s Orchard in Goodrich, Montrose Orchard in Clio, and a four-hive apiary at For Mar Nature Preserve & Arboretum where Jim teaches honey-extraction demos as part of the Honey Bee Kids series. There are between ten and 16 bee colonies at each apiary and each colony has a queen – the “mom of all bees.” 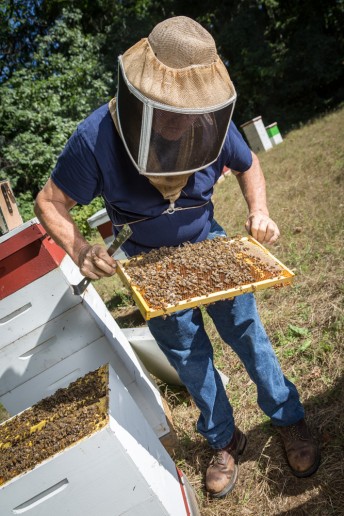 A beekeeper not only manages hives for honey and wax production, but even more importantly, provides the service of pollination. This year, Withers Mountain Honey Farm has produced approximately 12,000 pounds of honey. As a beekeeper, Jim extracts the honey from the hive, pulls out the wax, and then filters the honey. “We don’t filter out the pollen, because we want raw honey,” he says. The more Jime he spends around bees, the more he wants to know about them. “It’s a science and an art,” Jim says. “At first, I relied on science; but now I’m more drawn to the art.”

When he first became involved in beekeeping, Jim joined a beekeepers club and became its president. Since then, he has become very knowledgeable about beekeeping and shares that knowledge with other clubs and organizations around the state. “We were all novices,” Jim says. “I have a studious nature, so I started studying and doing research, and I like to share what I have learned with others.” 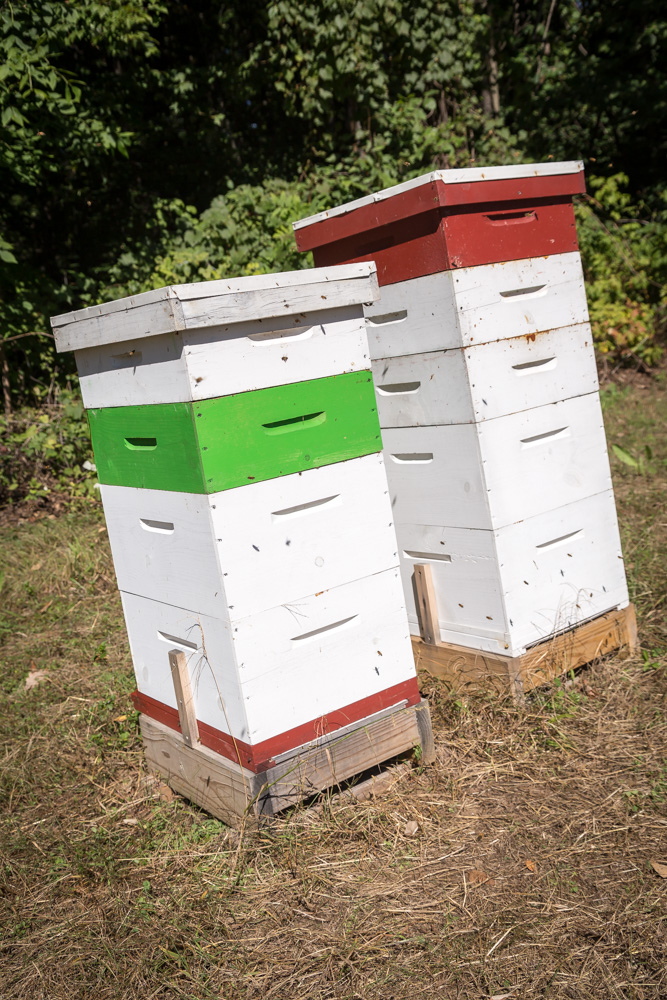 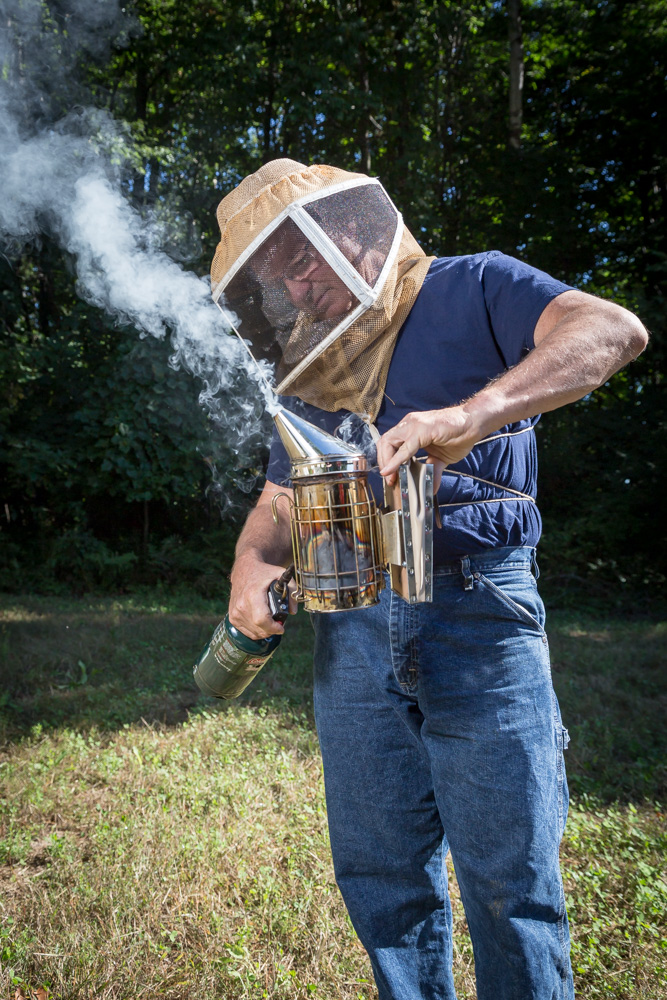 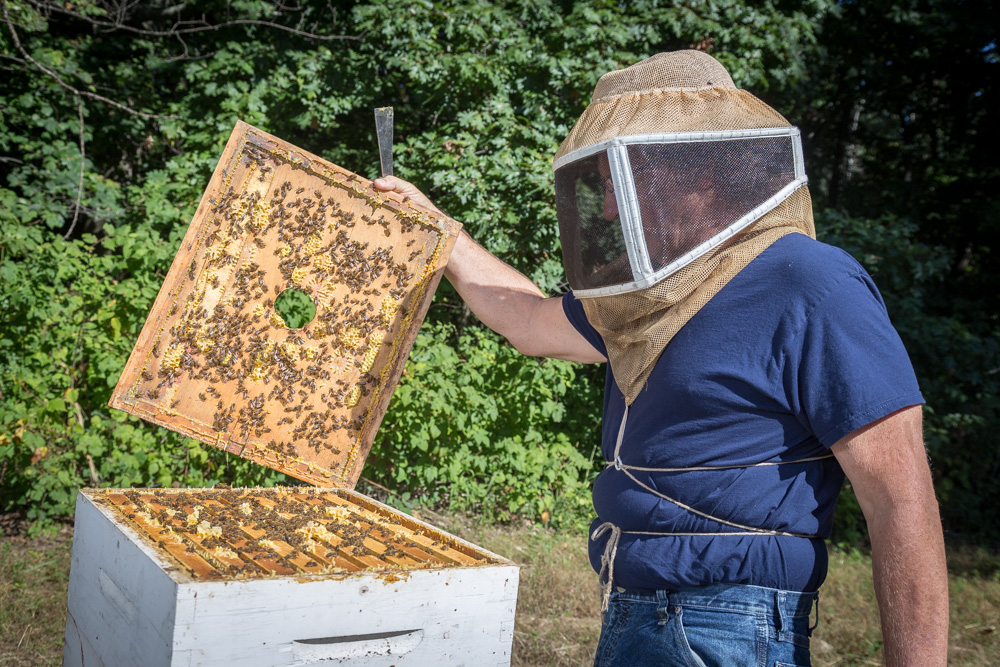 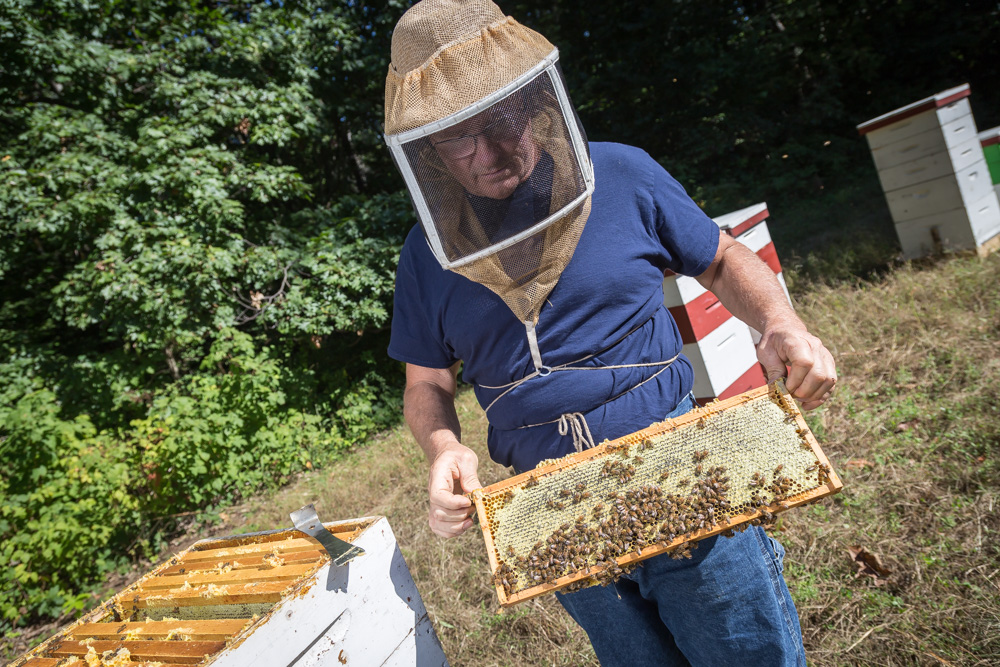 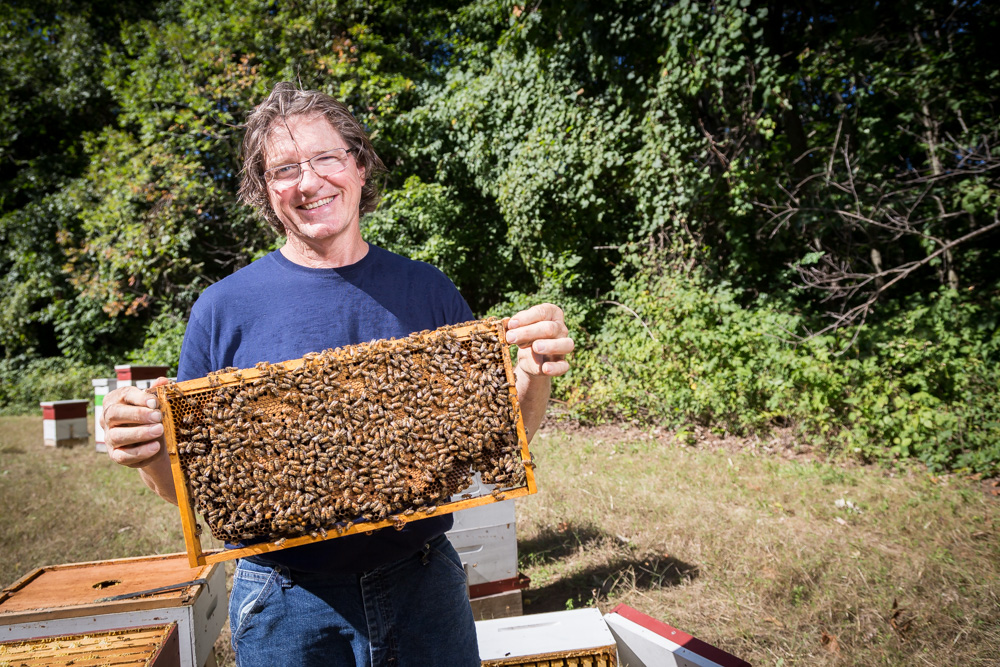 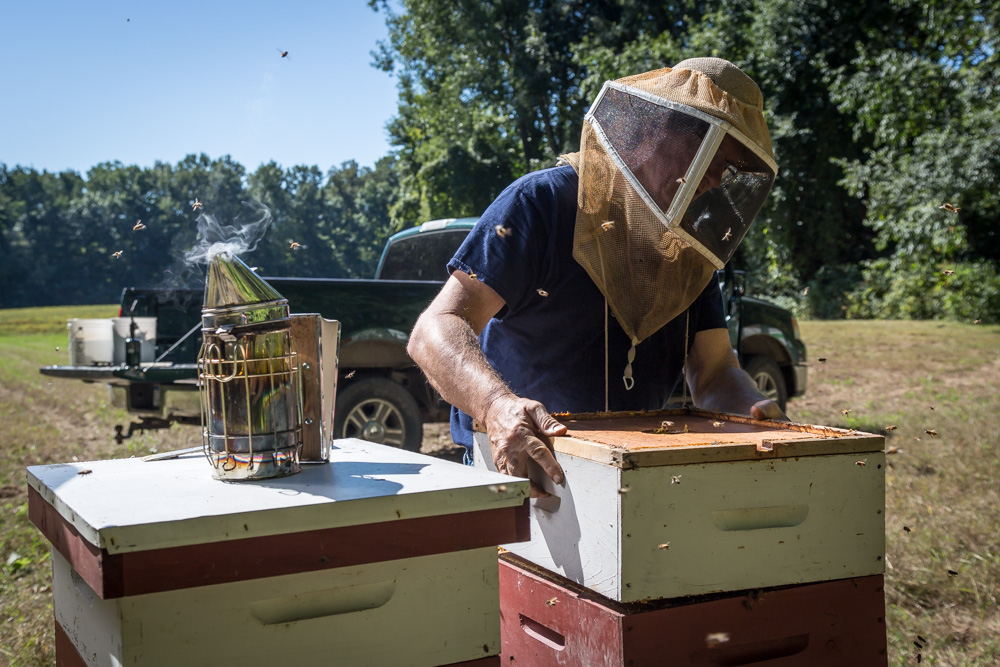 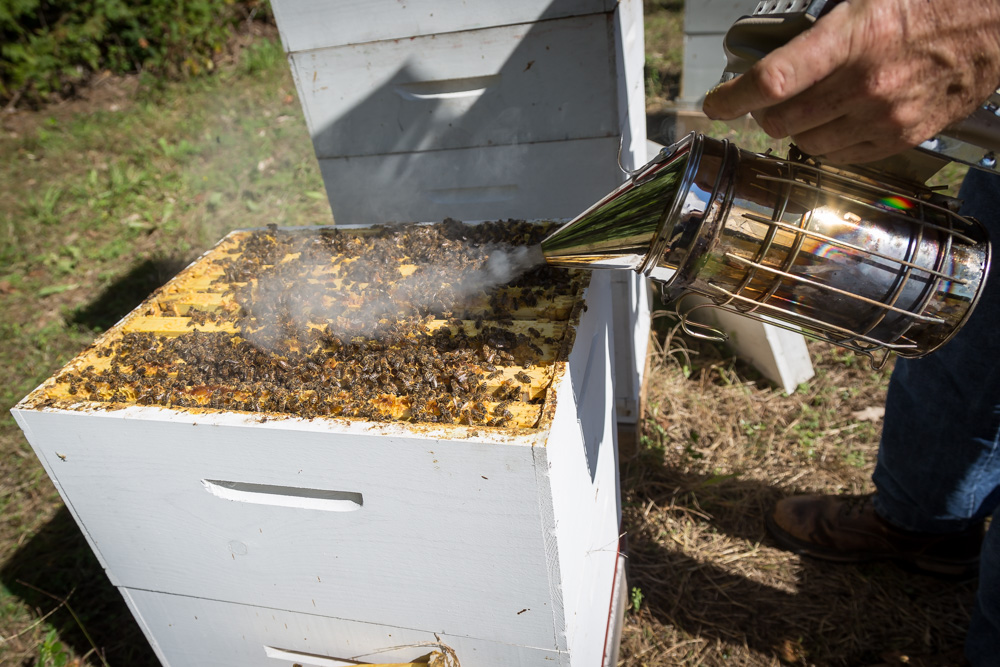 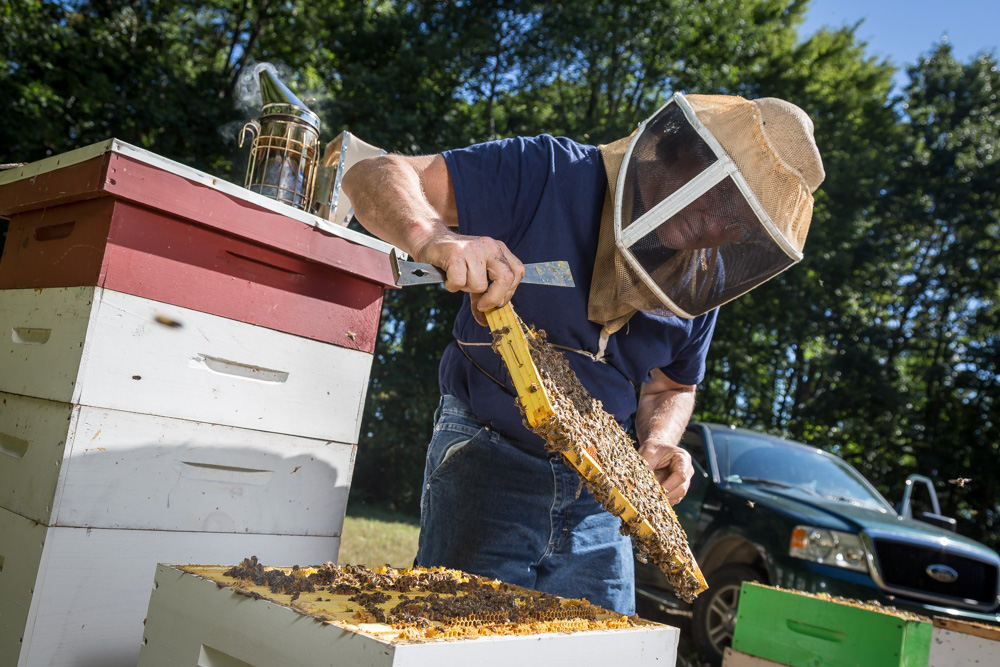 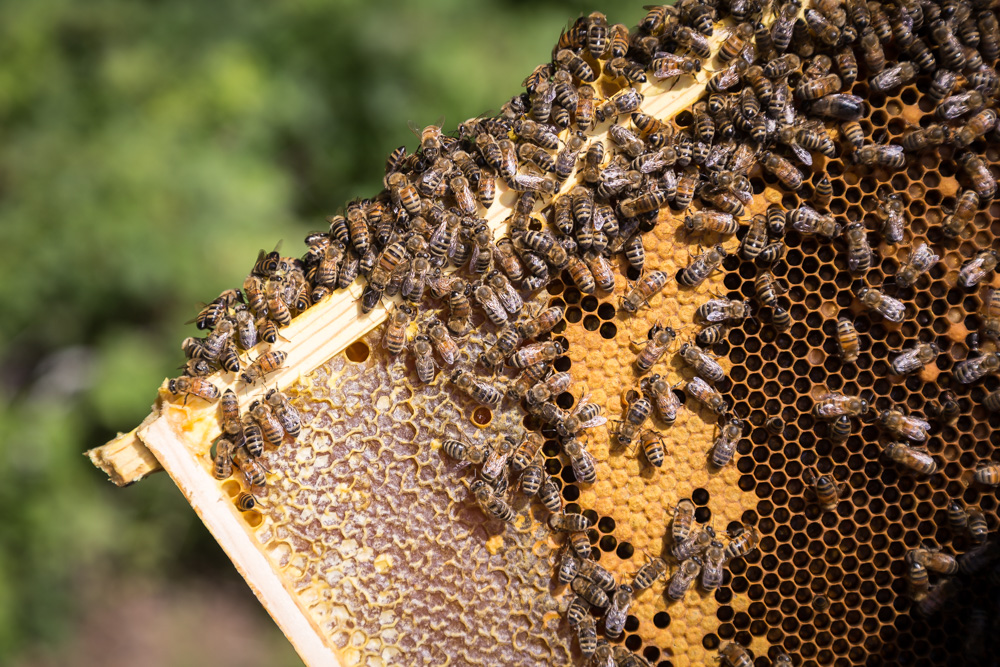 One of the drawbacks of the business is losing bees to the varroa mite, a parasite that lives in the beehive. The varroa mite is very destructive and kills thousands of bees every year. “Every beekeeper has mites in their hives,” Jim reports. The average annual loss of colonies is 35 to 40 percent. Last year, Withers Mountain Honey Farm lost 15 percent of its bee population to the parasite and the year before that, 40 percent. Jim uses an organic treatment to kill the mites. “Most of us like to do organic as much as possible,” he adds.

One thing is for sure: Jim loves what he does. “It’s so fascinating,” he shares. “I get to work outside and there is always something to learn. I know that what I do helps humanity, the planet, and nature. I’m proud to be a part of this. I feel like I have a career that really matters.”