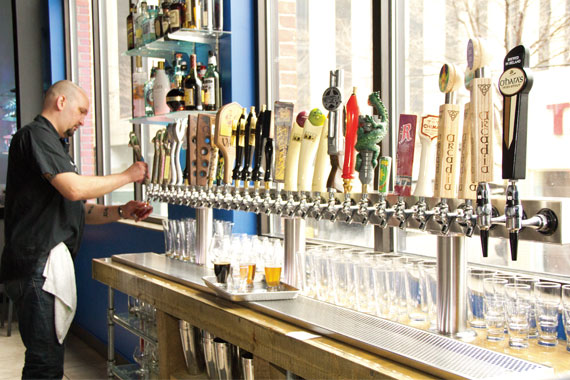 Co-owner Rob Klaty of Flint, who is also the owner of Flint Crepe Company, recalls sitting around with some friends one evening when he decided that he wanted to open a place downtown where people could gather to socialize and enjoy tasty food and drinks. He also wanted to provide a menu unique to the downtown area. “There was no barbecue in Flint,” Rob said, so he and his partners developed an idea for urban barbecue: country cooking with a downtown feel.

For his latest restaurant venture, Klaty chose a space that was once a Mexican eatery in the Wade Trim Building on South Saginaw Street, across from the Capitol Theater. The newly remodeled facility showcases a vibrant and eclectic street art wall mural painted by a local artist, as well as locally-made tables and chairs. “Everything here was made in Flint,” Rob boasted.

Since its grand opening in April, the restaurant, which seats up to 50 people, has seen a good turnout. Table & Tap will feature a variety of pork and chicken entrées, including mouthwatering barbecue ribs, slow-cooked pulled pork sandwiches, and bratwurst made in-house, to name only a few. Everything is smoked in a smoker on the premises, and diners can enjoy a wide variety of Michigan-brewed beers on tap, as well as some Michigan liquors. “Beer, barbecue, bourbon: that’s our motto,” Rob said.