We never planned on going to the Louvre.

There are so many other museums in Paris – Musée d’Orsay, the Rodin Museum, Petit Palais, Orangerie Museum and a weird erotica museum in Montmartre, just to name a very few. The Louvre was too big. We were told to skip it. The lines were often long, there were pickpockets aplenty, and one simply could not see everything. Not in one day, not in one week. As much as we love museums and art, this sounded like a large and stressful commitment.

So, I repeat, we never intended to visit the Louvre. 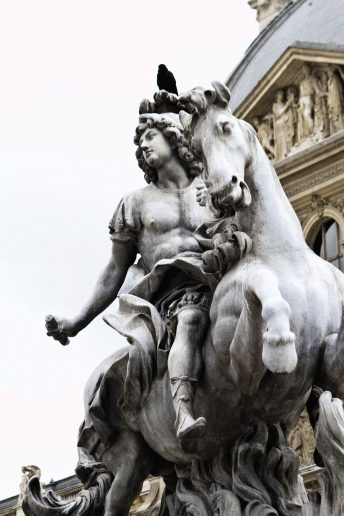 But we were near the Louvre, you understand. We were simply passing by, taking photos, enjoying the chilly day. Suddenly, we were approached. A couple, like us. “Would you like our tickets to the Louvre?” they asked, gesturing to the museum just behind them. “Here,” they said, smiling. “Enjoy!” We looked at one another and shrugged. The Louvre hadn’t been on our agenda, but who were we to question the universe? We took our free tickets and walked into the museum.

The first feeling that hit me was an odd kind of despair. The Louvre truly is gargantuan. From looking through the guide map alone, it was clear that there was no way to see all of it, or even to glimpse all or even most of the highlights we most wanted to see. It is too vast, too many rooms, too many paintings to walk by, not a moment to spend even glancing at them.

We chose three halls to venture down, with the aim of seeing the Mona Lisa, but other than that, anything else spectacular we saw along the way would be pure surprise and coincidence. Firstly, even this course of action was overwhelming. There are so many frames and so many paintings. There are sculptures and pieces you’ve seen on TV and the halls resonate with the footsteps of multitudes of people. People from all over the world, speaking all languages, taking photos, studying the artwork, admiring, discussing, experiencing. 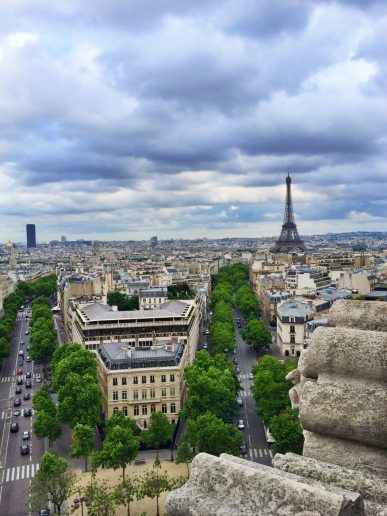 Soon, we were at the Mona Lisa. And somehow, we were right at the front, as close as you can get. There is a railing a few feet away from the actual painting, and there we stood, right at that railing, with an excited crowd behind us and only Mona Lisa herself and a bored security guard in front of us.

Now, the first thing one notices about the Mona Lisa is that it is altogether disappointing. It is much smaller than one would imagine and the colors appear almost dingy compared to most of the paintings one passes to arrive at that spot. I had turned slightly to whisper this exact observation into my husband’s ear, when I saw it.

A pickpocket. A woman sneakily, stealthily reaching into a man’s satchel as he obliviously took photos. Her hand, when I saw it, was holding his wallet … she was almost home free! What could I do? Well, I must admit I didn’t even think before pointing my finger directly at her. Everyone else was staring at DaVinci’s masterpiece, but she and I looked only at each other. “No!” I said firmly, still pointing. “No! No!” She raised her hands in surrender, dropped the wallet back into the satchel, then muttered something in another language and slunk away, lost in the crowd. The man who almost lost his wallet, none the wiser.

I couldn’t tell you about anything else we saw at the Louvre. We hadn’t even planned to go. But, world-class art aside, it’s a day I won’t soon forget. After all, how could I forget my own crime-fighting superhero origin story?