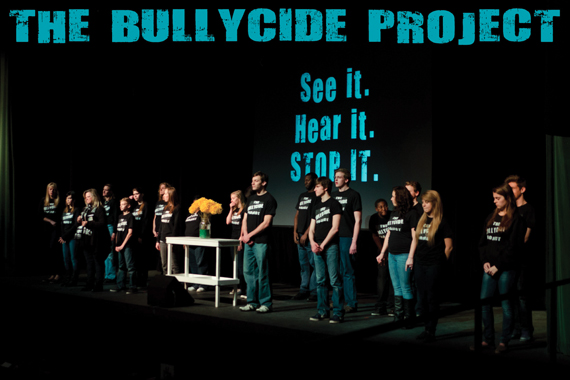 For many children who are bullied at school, on the bus and online, it feels as if there is no escape from their torment. In fact, the maleficence of some bullies is so incessant that a growing number of American kids commit suicide – hence the coined term bullycide. Local theatre producer Lori Thompson of Flint has long been an advocate for these voiceless victims. She fearlessly sheds light on a topic that otherwise lurks in the halls of America’s schools, and she sheds this light through the medium of theatre.

Thompson has worked in theatre performance and production for many years and currently teaches theatre at Fenton High School. About four years ago, bullying became a national hot topic when the extent and severity of high school and cyber-bullying was fully realized. A book called Bullycide was compiled by mothers of children who had taken their own lives to escape the relentless onslaught of bullying, and after reading it, Thompson decided to take a proactive approach to bully prevention. With the help of several community players, she has created a theatrical performance called The Bullycide Project, in which bullying victims are the main characters.

Thompson began her project by gathering accounts from youth in Michigan and around the U.S. who suffered severe bullying. Many of these stories ended tragically, so Thompson was careful to be sensitive to the wishes of surviving family members who were still in mourning. “I always ask permission first before we share a story,” she says. Thompson has personally sat with many families in order to properly tell a victim’s story, and the families are very often so grateful and gracious that they gift Thompson with the possessions of their sons and daughters to use in the production. During a performance, audiences meet the children who were reduced to despised victims, allowing the stories to feel more real and the urgency of their situation to become more apparent. Thompson says that kids in grades 6-12 want and need to see reality, because that’s what they live with every day. Her mission is to help victims find a way through it to something better and brighter on the other side. “There are a lot of troubled kids,” she says, “and you have to bring that soreness to the surface so they can find a way to heal.” She also hopes that bullies will see the effects of their actions on their peers and change the way kids interact with and treat one another.

The Bullycide Project is performed by the Trust Theatre Ensemble, which includes community players of every age, including many teens. Thompson says that many times, there is “a huge elephant in the room when it comes to the topic of bullying” because so many students just want to be able to talk about it, yet feel that they cannot do so. However, when they see The Bullycide Project, they realize the importance of speaking up. The project has had a huge impact on local schools, communities and the nation. Locally, Bullycide is booked to perform two or three times each month around the state. It has also been featured on national television through the CBS show “48 Hours” and a news segment on CNN, and has been performed before the Federal Partners in Bullying Prevention Summit in Washington, D.C. Thompson appreciates the impact that Bullycide is having on people all over, but is not caught up in the whirlwind of media attention. She’d rather focus on telling the students’ stories and making a difference. No matter how much public attention you garner, she says, “the sobering reality of severe bullying is still sitting right there before you.”

Thompson understands the impact that stories of Bullycide can have on an audience, and for that reason, she is also careful to tell the stories of students who are survivors. The uplifting message of The Bullycide Project is one of hope and restoration. “We want to bring stories that say to kids, ‘We need you here,’” she said of her endeavors “and we are trying to equip students with the right tools and the right armor.”