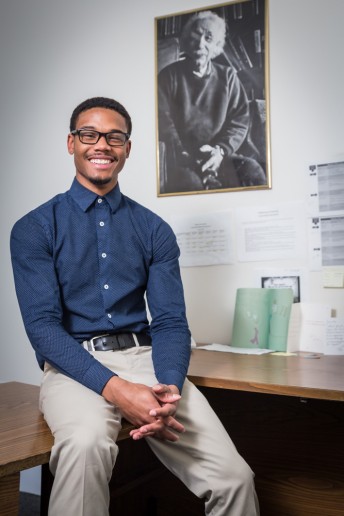 As a senior at Kettering University, Jonathan Blanchard is only a few years into his adulthood. Yet, he has an unmistakable, powerful, and passionate concern for the next generation.

“That concern for kids’ futures comes from my own upbringing on Flint’s north side,” the well-spoken Blanchard says. “I saw of lot of kids who had potential, but did not use it in the right way. So, I just hope to play a role in getting kids on the right path in life. I had a mentor named Marc Alexander who was important in setting me on the right path, so this is also about giving back.” While a Kettering student himself, Alexander started an organization called Youth of Tomorrow with a program designed to develop young people in a positive direction. Blanchard was a participant while attending Flint International Academy.

“The experience really inspired me as far as getting a college education and entrepreneurship,” he says. Though still a year away from obtaining his business administration degree, he is already doing just that. He recently concluded his first year as a part-time staff member at Genesee STEM Academy, a K-7th grade charter school in Flint. Quickly, he proved that he is capable in a variety of roles; Blanchard has done fundraising, marketing, one-on-one mentoring, and served as a paraprofessional. That’s not all, however. 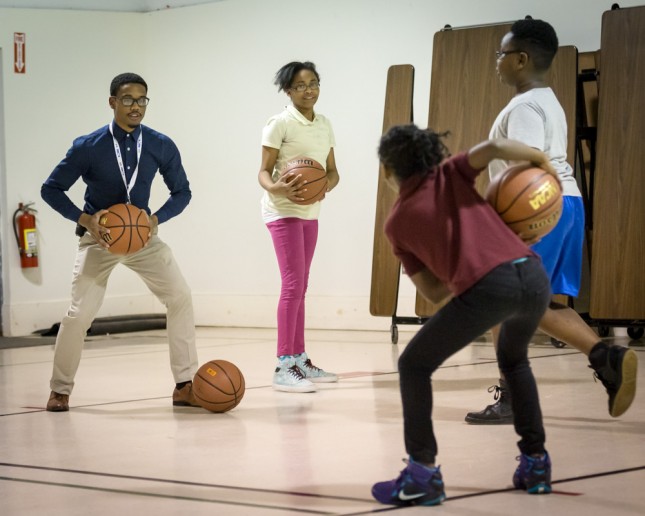 Like Alexander, Blanchard has also launched a company while still a Kettering student. Stemletics, conceptualized less than two years ago in his dorm room, is a program that combines the STEM (Science, Technology, Engineering and Math) approach to learning with athletics, exposing kids to the science and math behind some of their favorite sports, including basketball.

“There is a lot of math and science that goes into sports, especially basketball, like the arc of your shot. It’s not just shooting at the straight line to the basket – which is what a lot of kids do when they start out,” Blanchard says. “As far as dribbling, we examine why the ball bounces, the backspin of the ball, and a player’s release speed. These are things kids need to know in order to be the best they can be. We try to combine that with the aspects of STEM.” 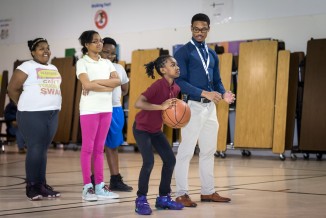 This spring, Blanchard conducted a pilot program of Stemletics at Genesee STEM Academy; and if one afternoon session was any indication, those in the program are clearly responding to the company’s mission, which according to the Stemletics website, is to expose youth to STEM, encourage a healthy and active lifestyle, increase math and science proficiencies, teach life and career skills, and foster aspirations for higher education and lifelong learning.

Among other things, Blanchard guided a group of students through math problems with ease before hooking up a computer program that uses a 94Fifty® Smart Sensor Basketball to teach students the science behind basketball. The interactive ball connects via Bluetooth to any smartphone or tablet to track shot arc, release speed, backspin, dribbling speed, and control.

One-by-one, Blanchard patiently worked with each student, watching them shoot and dribble while explaining how their performance was being displayed on the screen. He then showed them how using the program helps them improve. 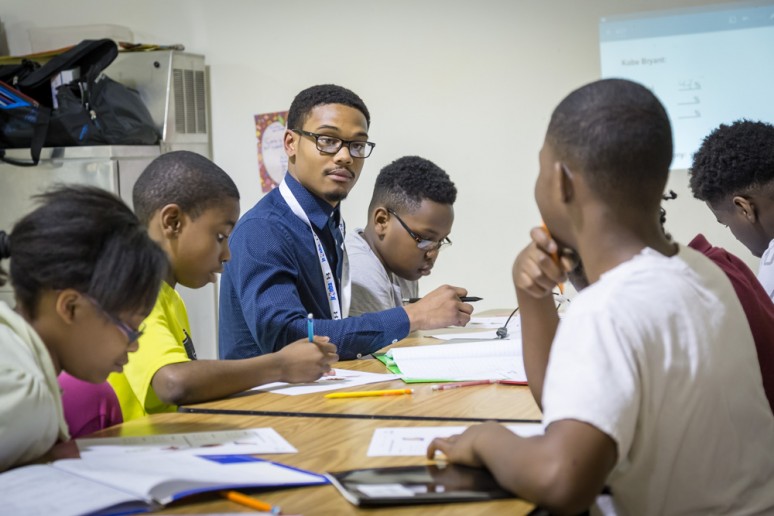 “I just hope to play a role in getting kids on the right path in life.”
Jonathan Blanchard

“This is our first time actually running the program,” says Blanchard, who began as an electrical engineering major before switching to business. “Before that, it was just an idea in my head. One of the goals is to open up kids’ eyes to all the different career fields associated with sports, like developing technology and analyzing performance. Hopefully, that will inspire them.” 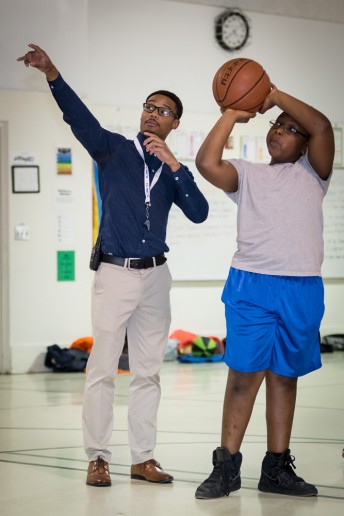 Needless to say, it was a very satisfying experience for Blanchard to put his concept into practice. “It’s been great getting a feel for how we are going to execute the program in the future and getting feedback from the kids to make it the best possible program for them,” he says. “Principal [Rita] Cheek was nice enough to let us do the pilot program here.” Cheek is elated that she did.

“Jonathan has been a wonderful addition to our GSTEMA family, because he genuinely cares about children and wants to support their overall growth,” Cheek says. “He has innovative ideas to link learning with real life experiences to engage students. Jonathan has been a positive role model for all students. Our partnership with Kettering University has blossomed due to his understanding of our mission and his leadership.”

Looking at the myriad of programs offered on the Stemletics website, it’s difficult to fathom that the idea for the business struck Blanchard one summer afternoon as he was playing video games.

“Yes, it all started with my love of video games – especially NBA 2K,” he recalls. “I always like looking at my statistics to see how well I’ve done. As I was doing that, I started thinking about how much math is involved and wondered if I could get kids involved in the math behind it and how that might help them. From there, I incorporated science and technology into it.” 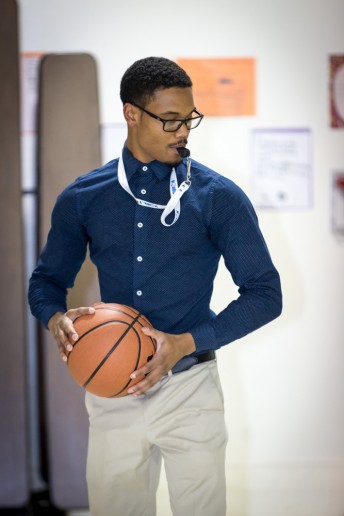 Last fall, Blanchard began his stint at Genesee STEM Academy. “I started by doing community outreach, trying to raise funds and secure grants,” he says. “Then, I started working with students who might be having a hard time in the classroom and that led me to become a paraprofessional. The experience of working with the kids has been eye-opening, but also very rewarding.”

In January, Blanchard entered his company in the Flint Green Light Business Model Competition, placing in the top ten. “Making the top ten [out of roughly 50 entrants]was a great experience, because it was my first chance to present what Stemletics is about,” he says. “Even though I didn’t win, it still generated some important contacts for me in the business world.”

Along the way, Blanchard was also awarded a $982 grant for Stemletics from the Kettering Entrepreneur Society. He added Kettering, USA Basketball, Junior NBA and STEM.org as partner organizations, as well. 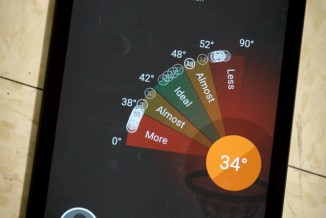 Blanchard, who played junior varsity basketball at International Academy, begins his second year at the expanded Genesee STEM Academy next month at its new location on Calkins Road in Flint. It will also begin accepting eighth-grade students. Prior to that, Blanchard’s next Stemletics event is a basketball camp August 8-11 at Kettering for students going into grades 3-8.

Blanchard will also soon begin working as a community resource developer for the Crim Fitness Foundation. “I want to continue working in education. I have found it so rewarding and I want to grow the Stemletics business,” Blanchard says of the future. “I’m excited about the direction it’s taking and how it can help kids.”

He appears well on his way to having a positive influence on many young lives.

Can’t get enough of Jonathan and STEMletics? Check out this video that Kettering University made to show off the entrepreneurial mindset on their campus: