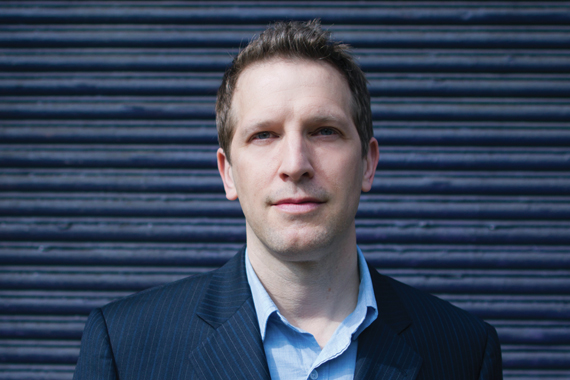 At the time of My City’s interview with Gordon Young, author of Teardown, Memoir of a Vanishing City, the temperature in Flint was ten degrees below zero. The third largest recorded snowfall accumulation in Michigan history – 17 inches – coated the ground in a blanket of white. The roads were still an icy mess, making travel anywhere extremely dangerous. Gordon, a freelance writer and a senior lecturer at Santa Clara University, was sitting in his San Francisco home. He sounded almost sheepish as he reported that the weather there was a balmy 70 degrees. While his report probably sets off a daydream about how nice it would be to enjoy a day of sunny California weather for our readers, Gordon was excitedly reminiscing about the snowstorms of his childhood days in the Vehicle City and how much fun it was to play in the snow.

It’s been about a year since Gordon finished writing Teardown, which is about Flint, the place he grew up and still calls home. The book chronicles the author’s quest to purchase a home in Flint and stay connected to the city where four generations of his family were born and raised. He shares the nostalgia of his childhood and about growing up in Flint when the city was at its finest. He talks about people who are putting their hearts and souls into the rebirth of their city after the devastating departure of the auto industry. At the same time, he painfully describes desolate blocks of abandoned and boarded up homes where only a single house is occupied, and where survivors brandish shotguns and monitor police scanners. He makes no attempt to deny the population decline and murder rate.

Gordon also shared his compelling desire to see Flint once again become a vibrant place to live. He discovered on his journey that it just wasn’t feasible to pursue buying a home in Flint. “Flint does not need an absentee homeowner from California who doesn’t have enough money to buy a house,” he laughed. “It was really a bad idea.” This was not his only discovery, however. Other avenues have opened in his quest to help the city that has defined him. A portion of the proceeds from Teardown have been earmarked for Flint charitable organizations such as Joy Tabernacle Church, St. Francis Prayer Center, Whaley Children’s Center, and the P3 campaign to relocate Powers Catholic High School. “I’m trying my best to play some minor role in helping Flint,” says Gordon. “It’s the people who live in Flint who are making the biggest difference, day in and day out.” 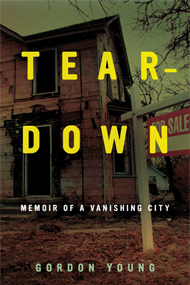 Gordon continues to work with Pastor Sherman McCathern of Joy Tabernacle Church, who made a huge impact on him and is a selfless example of one who is helping in Flint’s revival with his heroic effort to transform an abandoned place of worship and improve the lives of his congregation. Pastor McCathern said in one of his inspirational sermons, “Put your shoulders back and tell someone we can make it. In the middle of Civic Park where almost everything is torn down, God is saying, ‘I have something to give you. When General Motors gets through with it, let me tell you what God can do with it.’” Gordon says this about the pastor’s words: “I was sitting in his church one Sunday while a blizzard raged outside. It was the same day Flint tied the record for the most murders in a single year. And all the emotion he brought out in me and the rest of his congregation really made me realize why I had returned to Flint after all those years.”

A self-described expatriate, Gordon believes that if all expatriates of Flint did something to help the city they still love but had to leave behind, it would make a difference. And there are many people who moved away but want to stay connected to Flint, as evidenced by Gordon’s blog, Flint Expatriates, which he describes as a “blog for the long lost residents of Flint.” At the time of this writing, there were 3,883 ‘likes’ on the blog’s Facebook page and many positive comments posted by past residents.

One comment posted is an excerpt from a column written by Connor Coyne, who left Flint and later returned. “Look: I grew up in Flint, and moved away to Chicago and New York for 14 years, and then moved back to take advantage of opportunities here, and I’m telling you: out- of-town journalists who write ‘worst of ’ lists and exposés on my hometown have got it all wrong … I could tell stories … but I don’t have time. I want to take my daughter for a walk through the winter wonderland of our beautiful city. My neighbor finished plowing the sidewalk and plowed my walk and driveway, too. In Flint, we look out for each other.”

What does this author see for the future of Flint? “You have all these people who haven’t turned their back on Flint,” says Gordon, “but there is no denying or sugar-coating that Flint’s problems are hard to get rid of.” He also said the future of Flint depends on the future of the entire country, adding that factors such as globalization have hurt manufacturing cities all over. Yet, Gordon is encouraged by the growth of Downtown Flint with all the new restaurants and businesses that have moved there. Higher education is another area that is growing. “I love seeing all the college students Downtown,” he added.

Gordon believes there are still problems that need to be addressed, especially in many of the Flint neighborhoods, adding that some of the residents begrudge all the attention given to Downtown. “There are good people in the neighborhoods,” says Gordon, “and they need help, too. There’s money out there, but Flint has to figure out a way to harness it.” On a more positive note, there are people addressing issues and are working hard to make Flint a better place. Gordon calls this the silver lining. “Flint hasn’t given up yet,” he proudly states. “It still has spirit and the people are all heart.”

Gordon lives in San Francisco home with his girlfriend, Traci, and will continue his visits to Flint, saying he wants to stay connected to old friends and to the new friends he made while writing Teardown. He plans to help any way he can to see the fruition of Flint’s revitalization and to write more about Flint. “I want to see Flint succeed,” he says. “Flint is home to me. Flint made me who I am.”

See more photos HERE, or purchase photos from this story by going HERE and selecting the “Teardown” category.