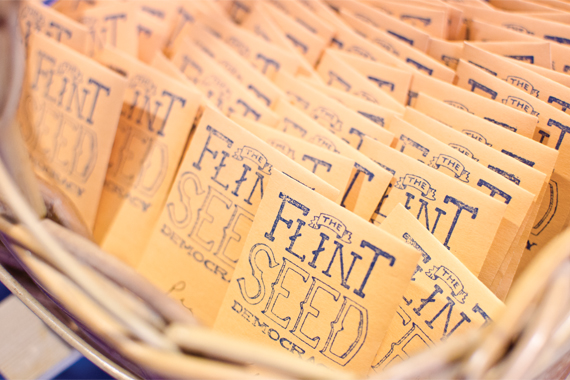 Every so often, a novel idea graces our community. The Flint Seed Democracy is a unique and growing group within the city’s limits, and hope is quietly growing with it. If you have any interest in growing your own produce, here’s a chance to spread both the seed and the word.

My City Magazine has mentioned The Flint Seed Democracy once before, in an article about Flint Soup published last June. Flint Soup awarded Flint Seed with a mini-grant, which mean that only six months after its start-up, the Seed Democracy was already on its way to becoming a more visible group in Genesee County. Today, the group is changing the way Flint residents grow and eat produce: through community.

Early in 2013, Flint resident and agriculture aficionado Russ Bedford had an idea to help bolster the city’s emerging urban gardening trend. Inspired by two books on food culture, Renewing America’s Food Traditions and The Omnivore’s Dilemma, he felt moved to action concerning the state of Flint’s food culture. He recognized the need for increased variety of seeds and crops that could be adapted to Flint’s climate, and he wanted to break the oligopoly that commercial seed companies have on the market. In his own words, he wanted to make farming democratic again by “providing products that are free and encouraging development that is completely decentralized.”

Step one was obtaining seeds. Russ gathered donations from dozens of commercial organizations and packaged different seed variations of the same plant together, calling them “Reclaimed Seeds.” Grouping seeds this way for growth is “essentially adding new genes to our Flint gene pool,” says Russ. Reclaimed Seeds are free to anyone for planting, and those who take them are encouraged to grow a crop and bring the seeds from their resultant harvest back to FSD’s seed bank. The seeds they bring back are called “Grow Out” seed, so named because they come from a local farmer and not a commercial source. The idea is to create a variety of seeds exclusive to Flint that have adapted conditions here and are more likely to grow better over time.

In the world of agriculture, it typically takes six to seven years to make a sustainable new seed variation, one that has passed the tests of the soil and weather, and have not died in the process of annual sowing and reaping. At this point, those seeds that make the grade have the distinct honor of being called “The Flint Seed Democracy Seeds” because they are new and exclusive to Flint. This process is not especially easy, but the benefits are many. More varieties of seeds are especially good in agriculture, because, as Russ puts it, “trading seeds is what produced so many varieties of fruits and vegetables over time.” Simply put, trading seeds breaks up the monotony of one basic produce.

Concerning The Flint Seed Democracy’s efforts, Russ declares that he is pleased with the community’s support. “People support what we’re doing,” he said, but his vision extends further. “Real success for Flint Seed Democracy will come in the form of widespread participation, as well as adoption of our varieties as part of Flint’s food culture,” he said hopefully, adding that FSD wishes to expose Flint gardeners to lots of genetic options and to allow them to choose what gets passed on. Russ regards the seeds that are returned back to FSD as “votes for how a Flint tomato, pea or bean should look.” Re-enter the concept of democracy, since the public at large is responsible for the development of a local vegetable variety.

As The Flint Seed Democracy continues to take more ground, Russ says that “events are major ways to mass-distribute seeds.” One such event was the Keep Genesee County Beautiful Annual Beautification Conference, held on March 8. The FSD was in attendance, spreading both the seed and the word. On a larger scale, Russ is also thinking of expanding across the country, and he has partnered with organizations similar to the FSD to swap seeds, exporting the veritable “Flint” variation of vegetables to other regions across the U.S. Of this effort, Russ says his hope is that Flint becomes distinct. “Flint should have a distinct food culture,” he said, not speaking of a certain dish or mean, but rather, of certain plants. Now that’s a novel idea.

This “seed breeding project” is gaining momentum, and promises a bright future in how people distribute, obtain and consume food in heavily industrialized areas. If you have been recently taken with the urban gardening movement, then FSD represents a perfect opportunity for you. Russ explains that FSD has a “meaningful relationship with the urban farming community,” and of that relationship he says, “Once we have successfully developed named varieties that will be consistent and reflect Flint’s gardening culture, I suspect that our urban-farming friends will be eager to offer them to their customers.”

There is no better time than now to join this popular movement. Find Flint Seed Democracy on Facebook at facebook.com/FlintSeedDemocracy, and get started sowing your seeds this spring!

See more photos HERE, or purchase photos from this story by going HERE and selecting the “Seed Democracy” category.