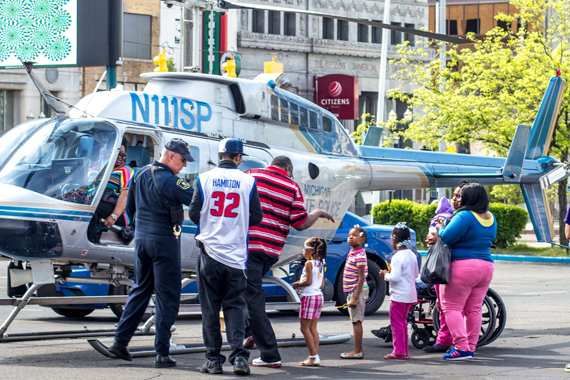 The following details a typical weekend in Flint—yes, typical, as nearly every weekend offers something like the events described below to be enjoyed by the general public—and much of it is provided at no charge. It would behoove the reader to not only consider attending such events in the future, but to also think twice before uttering the oft used, unmerited refrain, “There’s nothing to do in Flint.”

On Saturday, May 18, there were several events open for public enjoyment. The Downtown Development Authority provided the Ingenuity Walk from 2-6 pm. This family-oriented event showcased art and creative activities for children of all ages to enjoy. A 135-ft. zip-line was erected for people to “zip” down on, and the Michigan State Police provided helicopter tours of the Flat Lot. The chopper would eventually take off from the Flat Lot right before the public to see. Also dispersed on several blocks Downtown were artists and engineers who brought their crafts out to display, including face-painting and robotic devices. An especially cooperative day of Michigan sunshine and breezes made this outdoor event truly worthwhile. Thus, the Ingenuity Walk made for one interesting event, but you may yet feel that there was nothing that catered to your interests.

As luck would have it, May 18 was also Museum Day, an internationally recognized day of museum promotion. The Sloan Museum, Buick Gallery, and Longway Planetarium were all open, and although the three abovementioned sites are usually open on the weekend, in recognition of International Museum Day, Sloan and the Planetarium offered 20 percent off gift shop merchandise to anyone who mentioned an email sent out that morning. As alive as Downtown Flint has been as of late, and as well attended as the Ingenuity Walk was, hundreds more were out at the Cultural Center at the same time to celebrate International Museum Day.

As if the tandem occurrences of the aforementioned events on a beautiful day weren’t fortuitous enough, the rest of the universe decided to cooperate by providing a clear sky, a half-moon, and an especially conspicuous planet Saturn in the night sky for Longway Planetarium’s Star Party, held from 7:30-10 pm. Provided by the generous support of the Charles Stewart Mott foundation, this event was free to the public and featured an indoor star show in the planetarium and a star show outdoors by telescope. Local astronomer Richard Walker, explained to My City Magazine that the half-moon that night made for a better viewing experience by telescope since more detail can be seen along the terminator, which is the line that separates the visible moon from that which is not lit by the sun during the moon’s phases. A clear view of Saturn was also available. How clear, you might ask? The image of Saturn as seen through the telescope is so clear that many who peer through the scope accuse Walker and his fellow astronomers of placing a Saturn “sticker” on the lens.

Walker, who had brought out his self-made telescope, which uses a 14” mirror for reflection, and thus better resolution, went on to explain that the Star Party just happened to fall on International Museum Day, and that it was not initially planned for the same day, but just as a half-moon makes for a better viewing experience, apparently fall and spring are better times of the year for a star-gazing as well, and the weekend of May 18 was the last chance until fall that Walker and his associates had for a clear image of a half-moon with decent weather conditions.

Although the Sloan Museum and the Buick Gallery closed at their usual time of 5pm, the Cultural Center was still full of traffic throughout the night since the weekend of May 18 also welcomed the Broadway musical Beauty and the Beast to The Whiting. Indeed, a musical featured on the Great White Way was on display here in Flint with reasonably priced tickets! If going to see a show on Broadway is considered something to do in New York, then it should stand to reason that seeing the same production in Flint would also constitute something to do, and something grand to say the least. Now at this point, the reader should remember that all these events were on the Saturday of just one weekend.

On Sunday, May 19, the people of Flint had an opportunity to serve the community so that even he who considers himself to be a bit more “socially aware” had something to do over the weekend. The Downtown Development Authority was at it again on Sunday for its annual Spring Flower Planting. It is not quite as nice to report that hundreds were out for the festivities of Saturday while only two dozen shouldered the work on Sunday, but that is too often just how things go. Nevertheless, the handful of residents on hand for the event planted flowers in the pots stationed Downtown along South Saginaw Street, and Sunday proved to be a sunny day with little wind and warm weather, much like the Saturday that preceded it.

Those who are very active in the city will note that there were indeed other major events going on in town on that particular weekend, but I’ve not room to do them justice. The careful reader will note that two more of the weekend’s events are detailed in other articles in this issue. It’s not that there is nothing to do in Flint, and it’s not even that the things to do pertain to one type of crowd. It might in fact be that there is a stigma about the city – quite possibly even more prevalent in the minds of its residents than in the minds of those outside of Flint – that there simply is not anything to do. The long held false opinions of Flint need to be dropped altogether, and the sooner the better. There is so much to do in Flint that he who dares show face at each event is in danger of suffering from fatigue at the end of it all.

Flint, wake up and enjoy the beautiful weather, enjoy one another, and enjoy the restaurants and public events that make our city one of the most happening spots the world over-throughout history and today.

Are you interested in purchasing photos from this story? Go HERE and select the “Something Fun to Do” category.