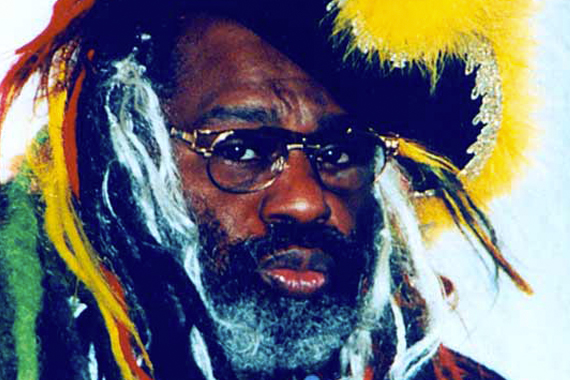 In January of 1971, I received a call informing me that the legendary Chuck  Berry was spending several weeks in Lansing, MI recording a new album with The Woolies.

After his incredible success in the mid to late ’50s and a period of incarceration brought about more by his skin color and unparalleled popularity among white youths than by any overt felonious acts, Mr. Berry had fallen on marginal times.

As a consequence, Chuck had become a lone rider on the Rock & Roll Range. He was his own manager now and all he carried with him on the road was a single guitar. His contract specified amplifier requirements – twin Fenders – and support musicians of acceptable ability (there weren’t that many chord changes.) After Chuck worked with The Woolies a few times, they became great friends.

Mr. Berry was also without a recording studio. When The Woolies offered him use of their humble but adequate facilities at extremely favorable terms, Chuck set aside much of January for the project.

Chuck had also reflected upon the possibility of generating a few dollars in the immediate vicinity during his stay in Lansing. Even though the Sherwood Forest concertgoers represented a brand new, second generation of rockers, the turnout was excellent. Berry’s show was magnificent and the audience exceptionally responsive. 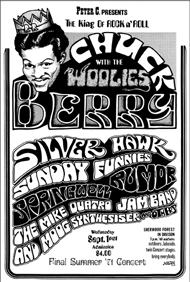 During one of several encores, Chuck introduced a novelty tune. It was chanted like a nursery rhyme, although the lyrics danced about with an unmistakable ring of double-entendre. It was about a little boy and his bell. Crowd participation was requested and given. A studio version performed with The Woolies was later discarded in favor of a live recording made during an appearance the following winter at the Lanchester Polytechnic College Arts Festival in Coventry, England. The BBC resisted severe pressure to ban the song after being accused of being “a vehicle for mass child molestation” by self-styled protector of British morals, Mary Whitehouse. “My Ding-A-Ling” sold over two million copies around the world.

In March, famed folksingers Peter, Paul and Mary broke up their band.

On Easter Sunday, Badfinger packed the Sherwood Forest lodge. “No Matter What” on Apple Records had gone through the roof and their connection with The Beatles didn’t hurt.

Creem Magazine was having financial difficulties and Shep Gordon had promised publisher Barry Kramer an Alice Cooper date for old times’ sake. Wednesday, May 12 saw us stage a “Creem Benefit Concert” at Sherwood Forest. The first “Wild Wednesday” outdoor concert of the year was scheduled for June 23. It was to be a notable milestone in Bob Seger’s career. Bob’s manager, Punch Andrews, called me a week before the concert.

“I won’t panic, Punch. Seger’s still on the date?”

“Seger wants to do an acoustic set.”

Rather than close the show, set-times were adjusted and Bob was scheduled for a 35-minute “all acoustic/solo performance” at 7 pm. Since it would still be broad daylight, jagged projectiles thrown by the crowd at the concert promoter could be more easily avoided. We had great weather and another record crowd for “Wild Wednesday ’71”.

As “Frijid Pink” finished their set on Stage “A” at 6:55, Bob took his position on Stage “B” in anticipation of my introduction. There was Seger on the promised stool with his guitar and a microphone. Nothing else.

I used my 20 seconds of introduction time to explain what a rare and special moment it was. The crowd applauded appropriately and Bob launched into something from his “Beautiful Morning” album about flowers and love and feeling and touching. He finished to polite, if somewhat tentative applause. His second selection was a six-minute ballad. The crowd was straining under the challenge. Bob’s third tune about quiet loss and gentle heartache broke the dam.

Exclamations of dissatisfaction and screams of “Rock & Roll!” were building. The crowd had lost even a pretense of tolerance. Impatience had given way to anger. Rage would come next.

If necessity is the mother of invention, then terror is the father of inspiration. An amazing opportunity for unplanned intervention had presented itself through absolutely pure coincidence.

David Teegarden and Skip Van Winkle hailed from Oklahoma and had worked out of the Detroit area for several years. I had never seen a duo of their kind. While David played drums with forceful precision, Skip Van pounded the organ and sang with equal power and talent. Skip looked, acted and spoke like Festus Hagen on Gunsmoke. When they first appeared at Sherwood Forest the preceding Christmas season, the audience had stormed the stage in adulation during their last of three encores. Their recording of “God, Love and Rock & Roll” had sold a half-million copies across the nation.

In the middle of Seger’s second song, I noted that David and Skip were almost finished setting up on an adjacent stage. Standing next to Punch Andrews, who knew his artist was in serious trouble, I loudly whispered that a remarkable solution might be right at hand.

Punch quickly visited with Teegarden & Van Winkle. They were watching Seger and were acutely aware of his predicament. No problem!

Seger had finished his third piece and was staring into the faces of a potential lynch mob, the eyes of 12,000 fans boring into his very soul. All Punch had to do was begin the first few words of hypothesis. Bob got it. His electric guitar was waiting with amplifiers set at maximum volume. Skip and Dave shook hands with Bob and spoke but a few seconds. The next introductory guitar notes were as known to me as my calling in life. It was the very first record I’d ever played on WNDR more than a dozen years earlier. Seger grabbed the microphone and screamed the opening lyrics of Chuck Berry’s immortal classic:

“I’m gonna write a little letter; gonna mail it to my Local DJ!”

Electricity cracked through the crowd like a bullwhip. The energy rush was nothing short of breathtaking as 12,000 involuntary and self-administered doses of raw adrenaline surged into the body collective. It was SEGER!

“It’s a jumpin’ little record I want my jockey to play!”

The mood-swing was incredible! It was as though a giant spring had been wound to the last possible degree of tolerance by 12 minutes of almost unbearable restraint, then instantly sprung-loose with full, abandoned, utterly reckless release. The “acoustic” beginning of Seger’s set had become an inadvertent catapult, launching the audience to sudden unexpected heights.

“Roll over Beethoven, I gotta hear it again today!”

Teegarden & Van Winkle were exploding under Seger’s guitar as though created solely for that exact moment. The musical synchronization and balance were perfect. They played and played and played. They raced through the duration of Seger’s allotted time and through all of Skip and David’s. I allowed the trio an extra 15 minutes for encores. The impromptu performance was magical. It was enchantment.

And so a new alliance was born. Seger’s album “Smokin’ O.P.’s” was released with resounding success. More than half of the material had been performed that night at Sherwood Forest.

On July 3, The Doors front man Jim Morrison was found dead in a Paris bathtub.

On August 11, Parliament-Funkadelic closed another “Wild Wednesday” show in spectacular fashion. Front man George Clinton had been thoroughly briefed about “voluntary behavioral requirements” while playing at Sherwood Forest. We had reviewed the constrictions again upon his arrival that afternoon. Somehow during late-evening performance, George suffered a serious attack of confusion. As he later apologetically explained to me:

“Hey, Man. I know we talked, but I couldn’t remember whether you said to do it, or if I was supposed not to do it. I knew it was one or the other. I decided to do it. I’m right half the time!”

Fortunately, it was during their final number of the night that George stripped down to nothing more than a purple, iridescent jock-strap, glittering and sparkling and shooting multi-colored, laser-like rays into the night. The accompanying extraordinarily colorful language and imagery immediately offered unnerving, unswerving visions of an ultimate hell to dozens of white policemen with badges.

Police Chief Ed Boyce was frozen in shock. The rest of the Township forces, tired after nearly 12 hours of security detail, looked to Ed for an indication of intent. Ed looked at me. I looked at Ed. The group was ending their last song anyway and George had already left the stage.

The six-page police report was completed by Chief Boyce and four officers. Along with what George actually did were offered many creative interpretations of what he might also have said and could have been thinking about saying. (Most of the writers were former Marines.) George was taken downtown and then instantly released. The Genesee County Prosecutor refused to officially charge him with “obscenity,” but Ed had done his best, confidentially agreeing that George Clinton could certainly make a lasting impression.