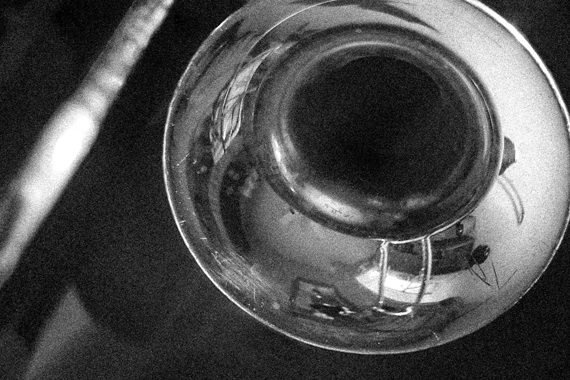 For decades, local jazz musician Sherman “Sherm” Mitchell embodied Flint jazz. A graduate of Central High School, the “self-taught” Jazz musician played multiple instruments and went on to compose and perform music around the world with recent concerts in Switzerland, Holland and Finland. His compositions have been used by ABC and PBS, and he performed with the likes of Dizzy Gillespie, Muddy Waters and Diahann Carroll. In addition to raising a family and earning accolades of this degree, Sherm was still dedicated to his hometown, serving as a skilled performer, teacher and craftsman who ran Sherm’s Musical Instrument Repair shop in Flint.

On May 19, the Flint Institute of Arts hosted a service celebrating Sherm’s life. The ballroom of FIA teemed with nearly 300 people who filled every chair and lined the walls to honor a man who dedicated his life to the arts and to his community. The service featured a performance by the jazz group, Sextet. Sherm’s stepdaughter, Djuna Brown, read selections from Sherm’s poetry.

Longtime jazz enthusiast Jerome Wolbert of Flint attended the memorial service at FIA. He spoke very fondly of Sherm and of all Sherm had done in the community. “There is so much to say about him,” Jerome said. “He was always one who enjoyed life and music. As a talented player, arranger and composer, he helped and encouraged others. He would take time to advise and explain how to do something or what to do with a song or your instrument. Besides all of this, he gave breaks on repair charges to schools and to many people. He was proud of Flint and he was a positive force wherever he was.”

Sherm’s legacy will live on not only through his published works but also through The Sherman Mitchell Music Scholarship Endowment at Mott Community College, which serves to provide financial support for local college students. Select CDs of Sherm’s music were sold at the celebration service, with the proceeds going toward the endowment.

My City Magazine is honored to acknowledge the life work of this lauded musical pillar of Flint.