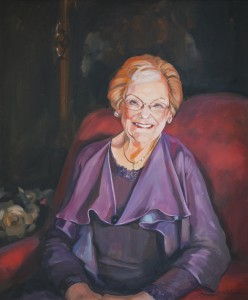 This is a word Almeda Hunter used in many conversations, and while she often used it to describe other people, those who knew her say that it was she who embodied its meaning.

Almeda was a spitfire with a passion for family, flowers and music, and by all accounts, she lived every moment of her 99+ years to their fullest. This wonderful, community minded lady passed away on July 13 in Austin, TX, where she spent her last years with her youngest daughter, Nancy Ring. While her life began in Missouri and ended in Texas, the story of this woman, who won the hearts of all who knew her, is all Flint.

Born in Kennett, MO on October 12, 1914, Almeda Blakemore was one of four children. A freckle-faced redhead, she was teasingly nicknamed “Toad-frog” by her brothers. The Blakemore family moved to Flint in 1923, where Almeda attended Northern High School and played the coronet in the marching band. “My mother had a lifelong interest in music,” her son, David Hunter, fondly remembers. Always energetic, Almeda got a job at Kresge’s Department Store in Flint when she was just 14 years old. “She wasn’t quite truthful about her age when she applied for the job,” laughed David. She met the love of her life, Joseph P. Hunter – “her Joe” – in 1937. They married that same year and raised three children together. Almeda was devastated by Joe’s passing in 1976.

For 30 years, Almeda was the office manager at Koegel Meats, retiring at age 70. She not only worked at Koegel, she became dear friends with the entire family. “In recent years, the Koegels would pick her up and take her to church on Sundays,” says David. “They were very close.” After retiring, Almeda pursued her passions with the same ardor she had at work. A lover of flowers, she was an avid gardener and played a leadership role in the Flint Garden Club. She served as the treasurer and president of the St. Cecelia Society, chairperson of the William Byrd Young Artists Music Competition, and board member of the Flint Institute of Music, to name just a few of her accomplishments. David said that her years of service at the music institute were recognized in 1990 with a $1 million fund to benefit FIM designated in her name. “She did a lot for Flint,” he explained. 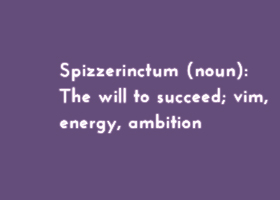 David has many fond memories of his mother. He remembers traveling with his parents and his wife to England and how much fun they had. “I was always amazed by her ability to make friends with everyone she met,” he said fondly. When David and his wife lived in Mexico, Almeda visited them often. Although she didn’t speak any Spanish, she and the friends she brought would take off on their own and go exploring. “They came back with outrageous tales of the fun they had,” he laughed. “No one was a stranger to my mother; she had no fear and had a good time with everyone she met.” David says that Almeda was a also lifelong learner and was quite computer savvy, even with her iPad and iPhone. “She kept up with technology, even at age 99!” he exclaimed.

Almeda lived by the philosophy that all people are good. “She saw the brilliance in everyone!” David exclaimed. He too remembers his mother often using the word spizzerinctum. David describes the meaning as “the drive to go out and get things done.” And that is what his mother did best. “She was just a joyful person,” he smiled. ♦
Many who knew Almeda were kind enough to share these sentiments with My City.

Almeda had a smile that lit up her entire face, and she was always happy and telling everyone she loved them, and she truly did. If I’ve learned anything from her, it’s that having a sense of joy will definitely take you very far in life and make every moment memorable. She always showed a genuine interest in people, and she was a prolific letter-writer. At the bottom of every note she ever sent me were the letters ‘S.I.D.,’ which stood for ‘sure I do’ (love you). I will miss her dearly.
– Barbara Koegel
Almeda was love personified. She just exuded a glow of love around her that made everyone who was with her smile and feel happy. She loved to do things for people, as well. After my husband Lou and I were married in 2000, she had a congratulatory announcement printed in the Flint Symphony Orchestra’s program for an entire season. At the age of 90, she dug some blue Forget-Me-Nots out of her garden because she wanted me to have them, and I think about her every time I see them in our garden. In one way or another, she’ll always be with us.
– June Emmert
Almeda was my cheerleader, like a mom, and a grandmother to our three children. Her impact was significant and far-reaching among our family. Our children continue to use her favorite daily words of wisdom that she taught them and as a matter of fact, our daughter had the quote tattooed on her back: “Don’t ever let anyone steal your joy!
– Paul Torre
She was just the most amazing woman! When we first met, our connection was instantaneous and she continued to be the same giving and loving person during the 20+ years that I knew her. She was always very accepting of people. I feel extremely honored to call Almeda a friend.
– Janie Fleckenstein 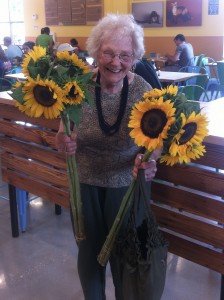 I had the honor of knowing Almeda for many years, and I feel blessed to have had her lovely soul in my life. Her personality and passion for life and music made her a beacon of light because she lived a life of true joy and thanksgiving each day. She told everyone she met to ‘have a blessed day,’ and it would always bring a smile to their faces. If we all showed others the kind of respect that she did, the world would be a better place.
– Alesia Byrd Johnson

Both professionally and personally, Almeda was always such a bundle of joy. From all she did to bring attention to the William C. Byrd Young Artist Competition to her love of music and support for young musicians, she was such an inspiration to all of us. We love her and what she represented, and she’ll be greatly missed.
– Mary Margaret St. John

Almeda was a great person who loved Flint, the Flint Institute of Music and the Flint Symphony Orchestra. She gave of herself to participate in any activity that had something to do with these organizations. She left a mark that will transcend to the end of time. Her kindness and love to me and my family meant a lot to us! Love you, Almeda.
– Enrique Diemecke

We feel blessed to have had Almeda as a dear and close friend for many years. Almeda knew no stranger, and loved everyone. When she walked into a room, her warm and happy spirit permeated the air. She loved people, music, working, planting flowers and giving – giving of herself and of her resources. Her gift of love and happiness will live in our hearts forever. When the Lord made Almeda, the mold broke. She was one of a kind.
– Hal & Jean Craig FlYnn

From the first time I met Almeda, I considered her my adopted grandmother. She was the first person I would look for at any FIM event – I had to get one of those famous hugs! She always had words of encouragement for me, always wanted to hear about what was going on in my life. Her enthusiasm was contagious and she genuinely cared about people. Almeda had a beautiful smile, a loving spirit and a huge heart. She is irreplaceable and I will miss her.
– Vince Lorraine