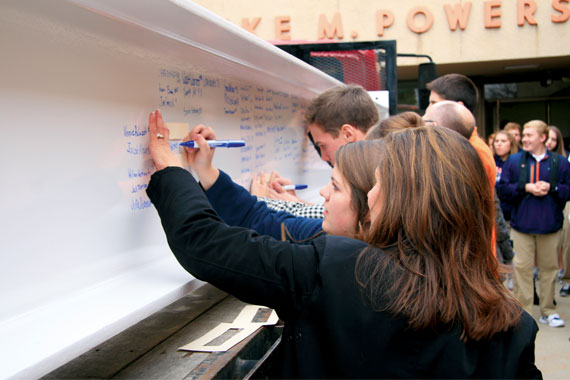 When I recently visited Fay Hall – the former Michigan School for the Deaf – the building was alive with a flurry of activity. Workers in hardhats scurried around, painting walls and pounding nails. Sounds of power tools screamed in the background while welders’ sparks flew and drywall dust swirled in the air. The huge sheets of plastic whipping in the wind were soon to be replaced by floor-to-ceiling window panes.

Near the front entrance stood a framed quote that once hung on the wall of the 100-year-old institution. The words, which are attributed to Helen Keller, aptly reflect the significance of the hall’s transformation into a new school. “One can never consent to creeping when one feels an impulse to soar.” Stacey Doyle, Director of Advancement at Powers Catholic High School said, “We haven’t been able to let that go. We aren’t sure what we will do with it but we are hanging onto it.”

Powers Catholic High School has been in the process of transforming Fay Hall into the academic wing of its new high school, which will share the campus grounds with a new Michigan School for the Deaf facility that opened this past year. Powers Catholic plans to open its doors to students this fall for the 2013-14 school year. The old high school, located in Flint off Carpenter Road, will continue to shape the lives of students, having been purchased by New Standard Charter School.

Powers had been searching for a new home for the last several years, hoping to find a more centralized location for its students. “The minute we walked in (to Fay Hall) we knew this was it,” said Stacey. Tom Furnas, Principal of the school for the past 11 years, is also ecstatic about the location: “I love that it is in the center of Genesee County,” he said. “Now that we are a citizen, we are going to be a contributor to Flint’s resurgence,” he added.

The plan is to retain the building’s historical character, which will celebrate its 100th anniversary this year on October 5. “People just tear down our history so easily,” Stacey said. “We’re glad to be part of a restoration.” Indeed, the old wooden door frames have been lovingly sanded and stained to a deep, rich hue. The ornate stair railings, having been heightened to meet current code, remain unchanged. The marble floor of the entranceway will be restored to its gleaming shine, and the Terrazzo flooring running throughout Fay Hall—which has withstood the test of time remarkably well—will be cleaned.

With a smile on his face and a twinkle in his eye, construction worker, Joe Kotrink of Artistic Decorating has painted the walls a deep, rusty red. He has a lot at stake in this project. Not only will his son, Joe, attend the school next year as a freshman, but he himself is a Powers alumnus, class of 1985. Stacey commented on how eagerly the students were anticipating moving into the new school. Some have compared the look and feel of the historic wing of the school to the fictional Hogwarts from the famous Harry Potter series.

The four-story Fay Hall will house 29 classrooms. From the highest windows, the campus of Kettering University can be seen, as well as Hurley Medical Center and Downtown’s Genesee Tower. The fourth floor presented the biggest challenge in the renovation process, as it hadn’t been used in over 50 years, Stacey said. During the purchase, rafters peeked through holes in the ceiling. Now, the light and airy space is being prepared for art classrooms, a yearbook room and even a kiln room. “The lighting here is great for art creation,” she added. The fourth floor’s remaining classrooms are dedicated to the sciences.

On the day of my visit, construction was well underway on a 75,000-square-foot addition that will house the library and media center, cafeteria and common area, auditorium, band room, gymnasium and auxiliary gym. “This is where history meets technology,” said Stacey of the state-of-the-art addition. Federal and state tax credits have allowed the school to build a campus worth more than $20 million. At this writing, the school was just $4 million shy of its $14.7 million fundraising goal.

Always intertwined with new beginnings are sad goodbyes. Alumni, parents, students and friends bid farewell to the old school at Powers Catholic’s Last Party in April. For one family, the occasion was especially bittersweet. This year, the Racine family of Grand Blanc came full circle. Paul and Sandy Racine’s youngest son, Nick, is the last of the couple’s four children to graduate from the Carpenter Road campus. Paul was a student of the first graduating class back in the 70s. While Sandy is disappointed that Nick won’t have the experience of receiving his education in the newly-built school, she and Paul are staunch supporters of the move.

“It’s exciting to begin a new chapter,” Sandy said. “All the parents think it’s a positive move and the students are embracing it.” She is very excited about the school’s location in the city of Flint and about the benefits of the move to the students. Kettering University, now just a mile away, and the University of Michigan-Flint have both partnered with Powers to offer college classes to the high school students. “It’s good for Flint, and it’s good for Powers,” Sandy said. Stacy said the students look forward to collaborating on service projects with the city, which is part of their learning experience. They are already water sponsors for the Crim Road Race, which attracts thousands of visitors to Downtown Flint in August. Tom said Whaley Children’s Center is opening a new facility soon and wants to partner with Powers, giving the students an opportunity to tutor and mentor Whaley kids. “This is a great opportunity for our kids to be of service to others,” he said.

Tom said he iterates to the graduating students who are disappointed about not attending classes at the new campus, “This is your alma mater. Make sure you visit. We are the same school, just in a new home. Remember – you are part of it.”