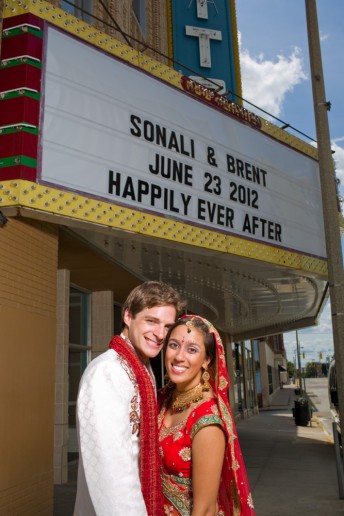 Girls dream of the day a dashing knight rides in on a white horse and sweeps them off their feet. This dream became a reality for Sonali Arora when Brent Mata, her fiancé, arrived on a white horse on his way to marry her in a traditional Hindu wedding ceremony! The wedding festivities lasted for five days.

Brent was born and raised in Flint, and Sonali lived in Flint for much of her life, so it was very important to her to be wed in Flint. Sonali is trained in classical Indian dance and teaches special education, and Brent is a professional saxophonist and cinematographer.

The first day of celebration was a prayer ceremony at the Kasi Sri Viswanatha Temple in Flint for the bride and groom, and their immediate families. On the second day, a mehndi party was held – a pre-wedding event when intricate henna designs are applied to the bride’s hands and feet. It took five hours to complete Sonali’s designs, after which an open-house party was held in her family’s backyard, where guests could have henna designs applied, as well. “There was delicious Indian food and drink, and a dance party!” Sonali exclaims. Many of her cousins came from India for the wedding and helped with the henna designs. 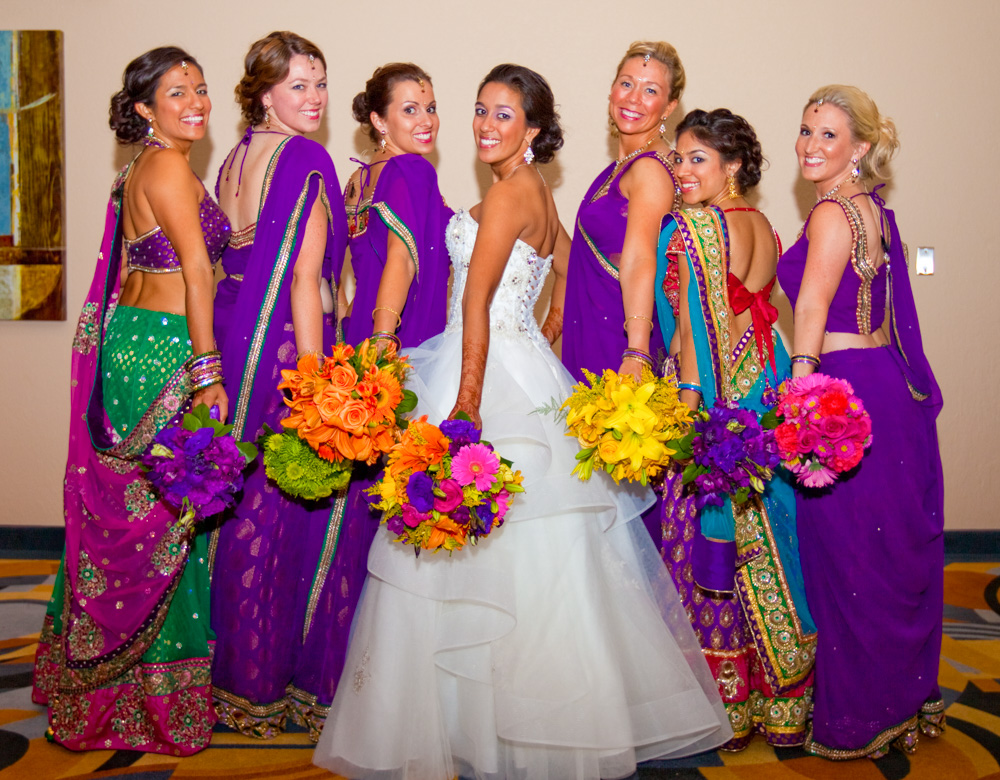 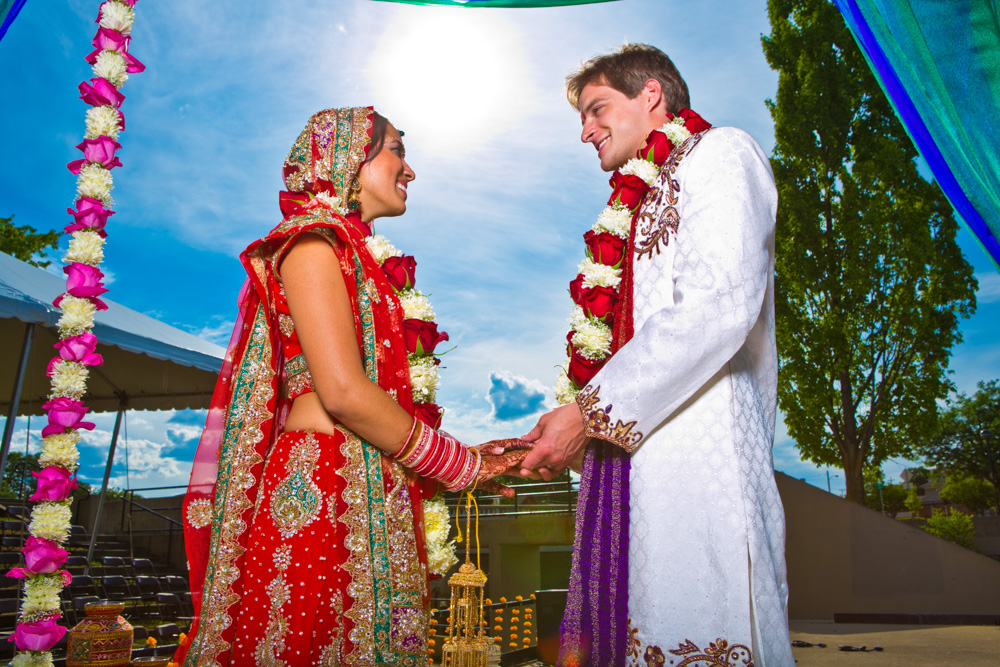 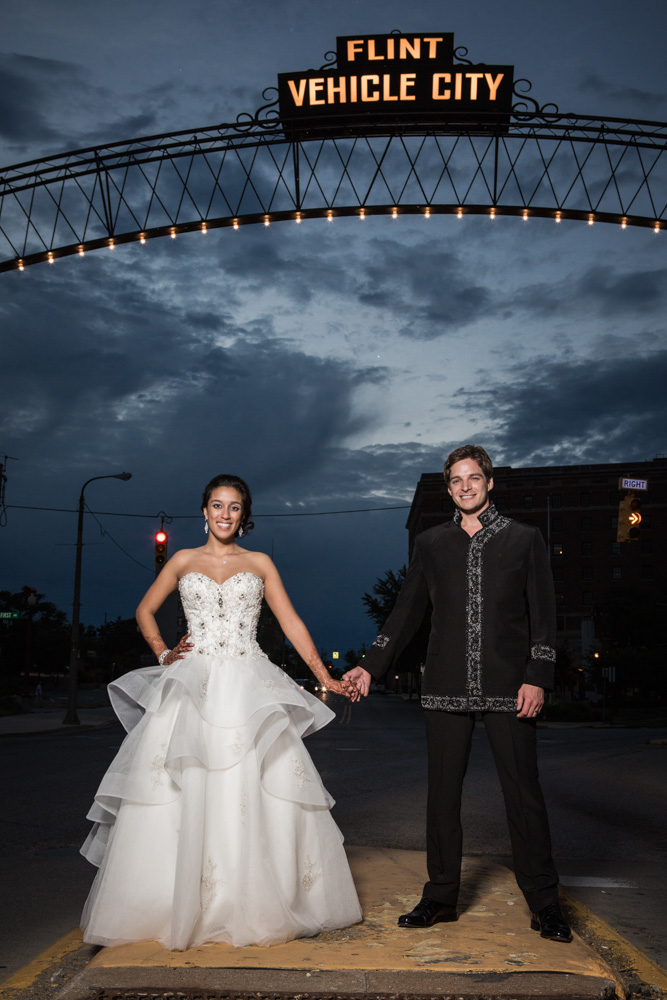 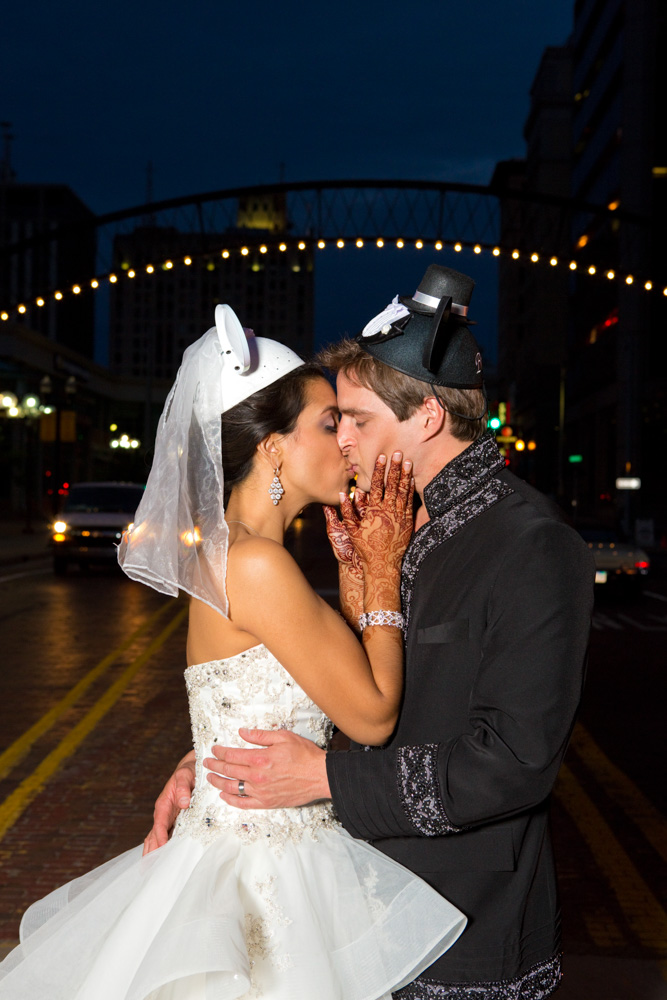 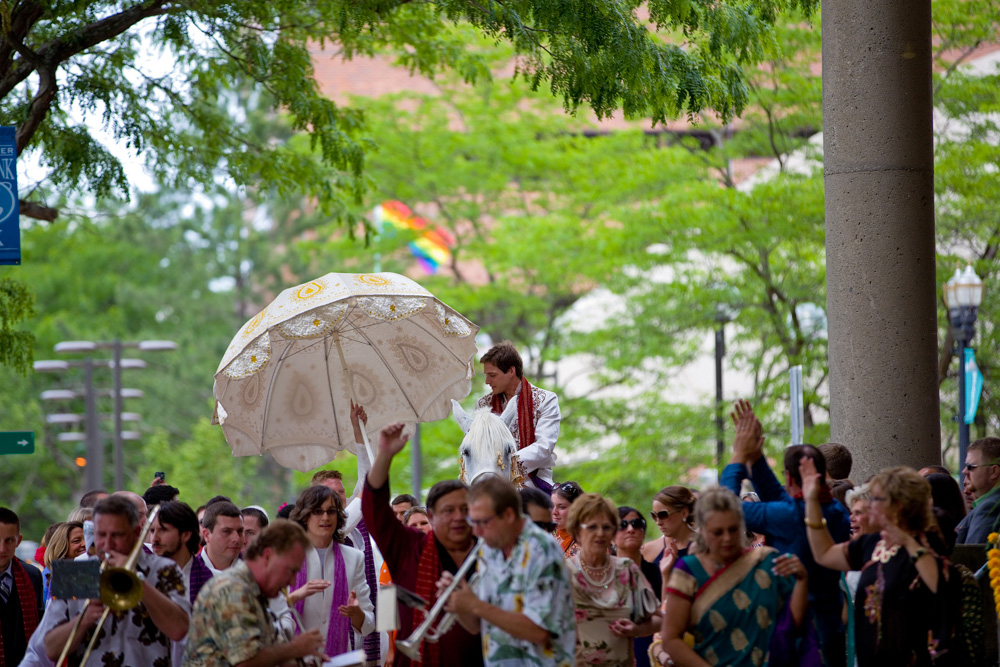 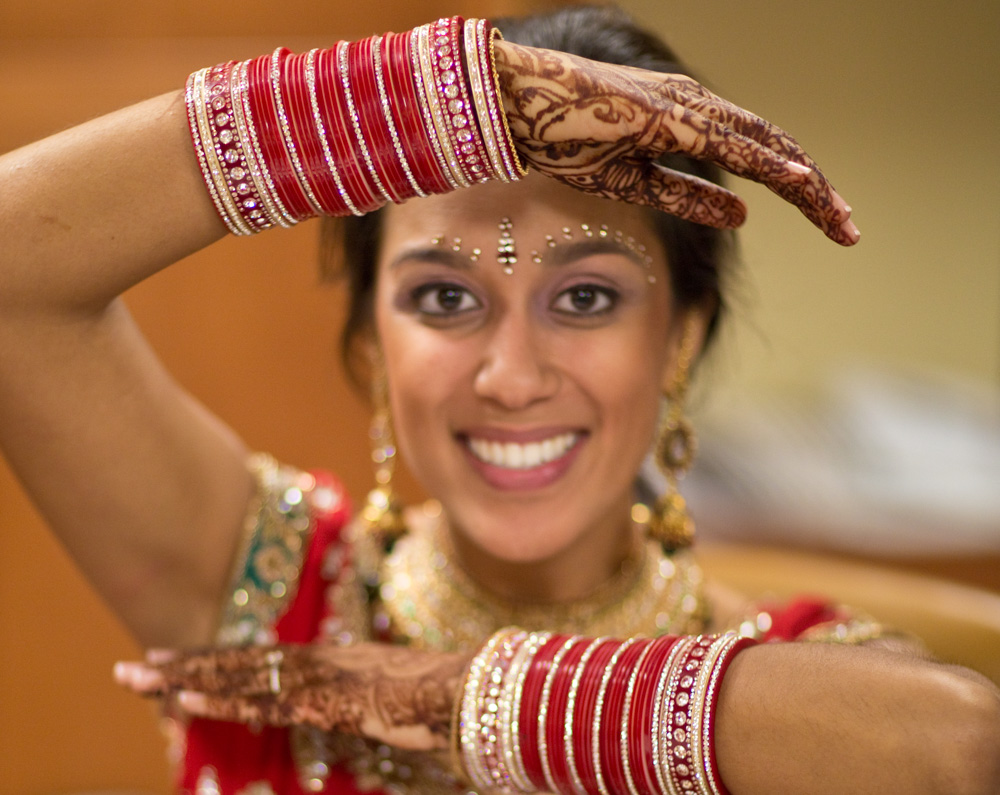 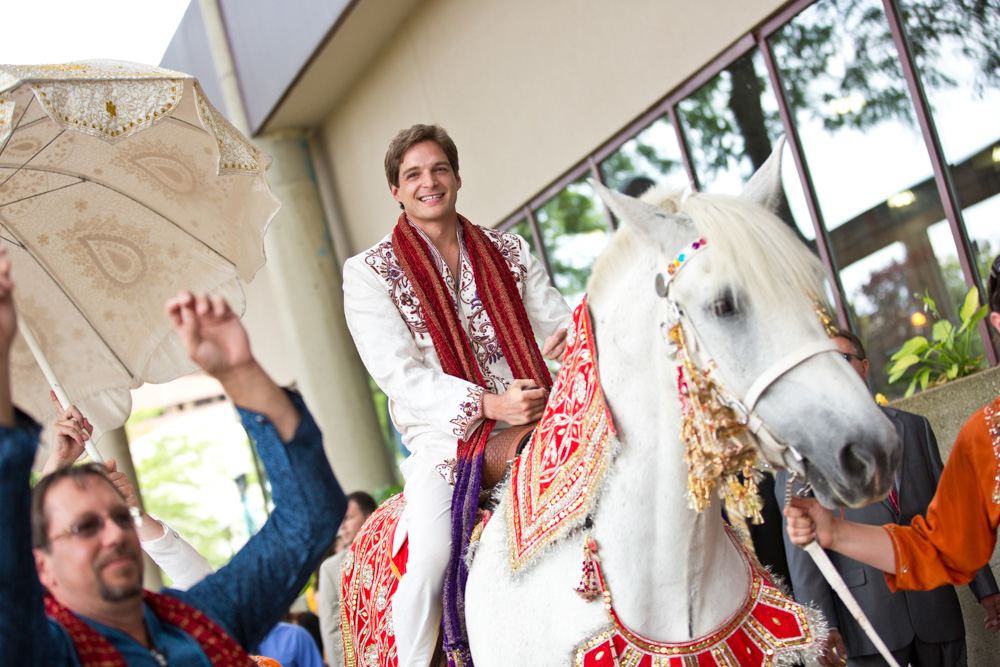 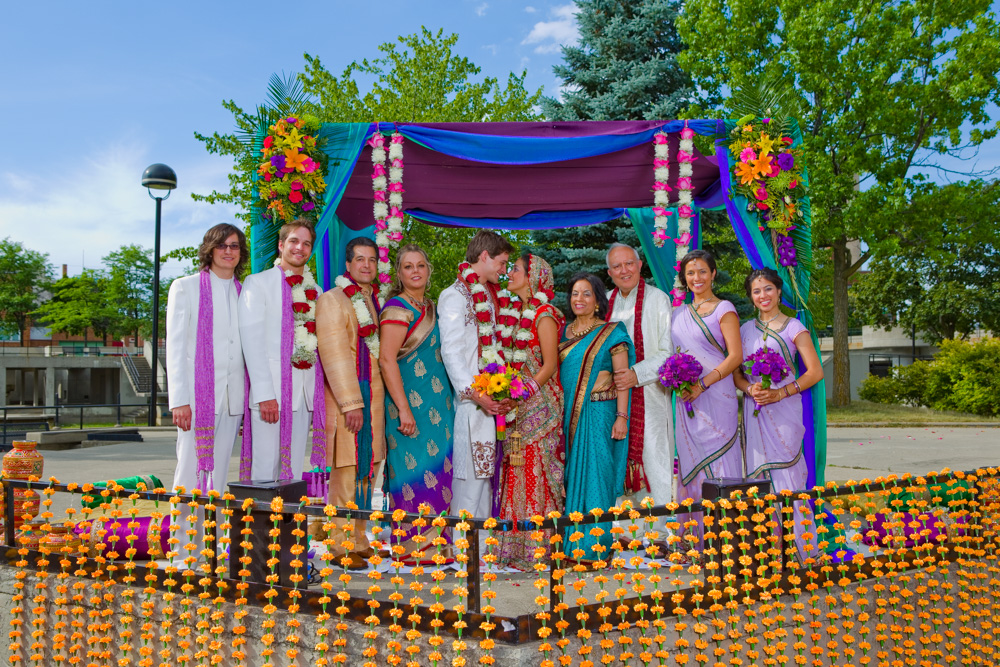 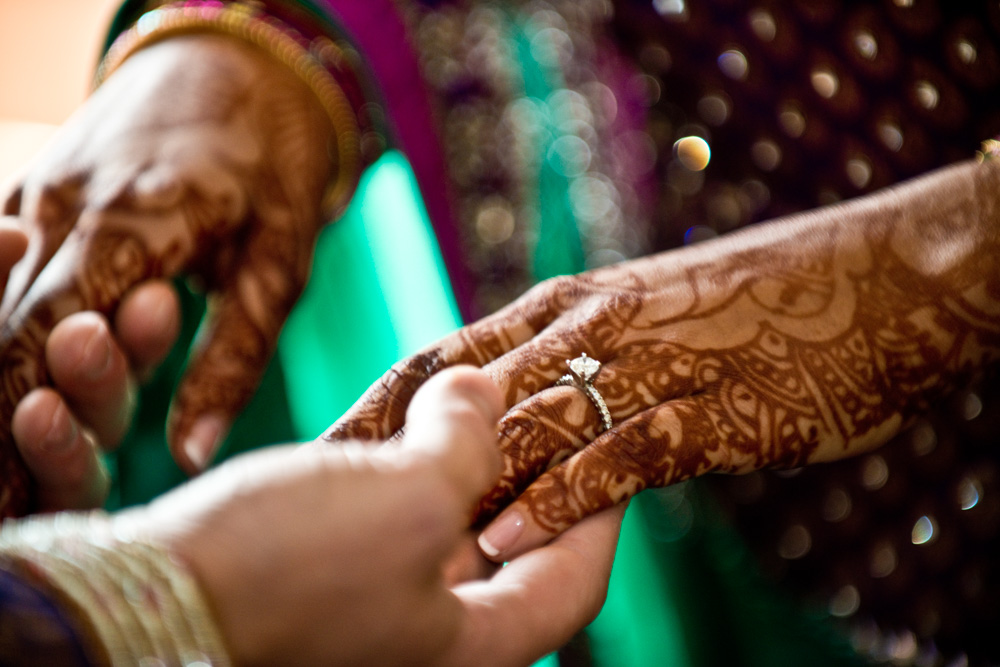 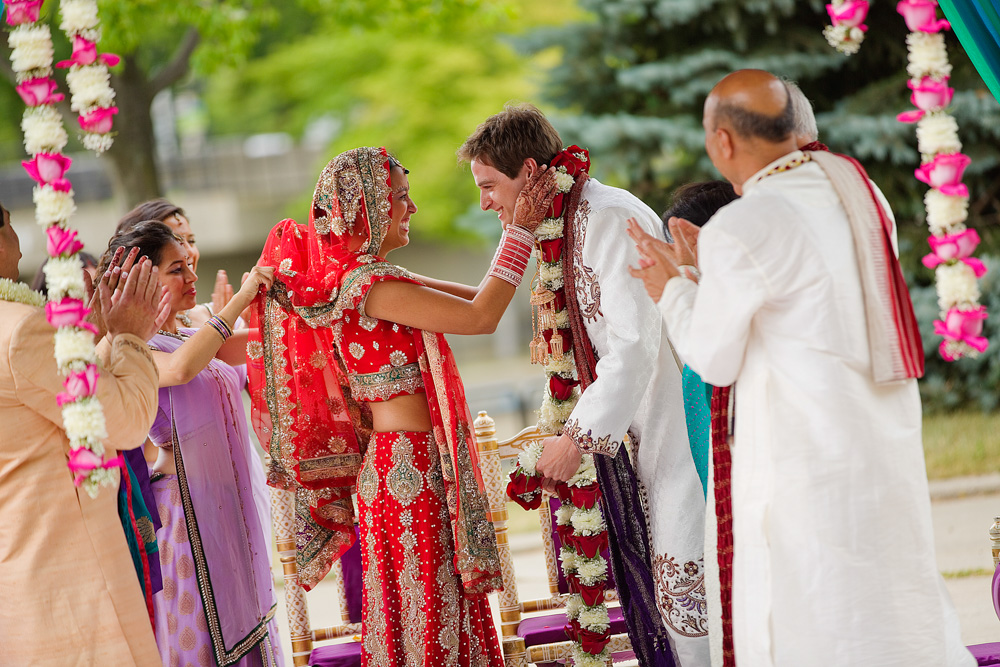 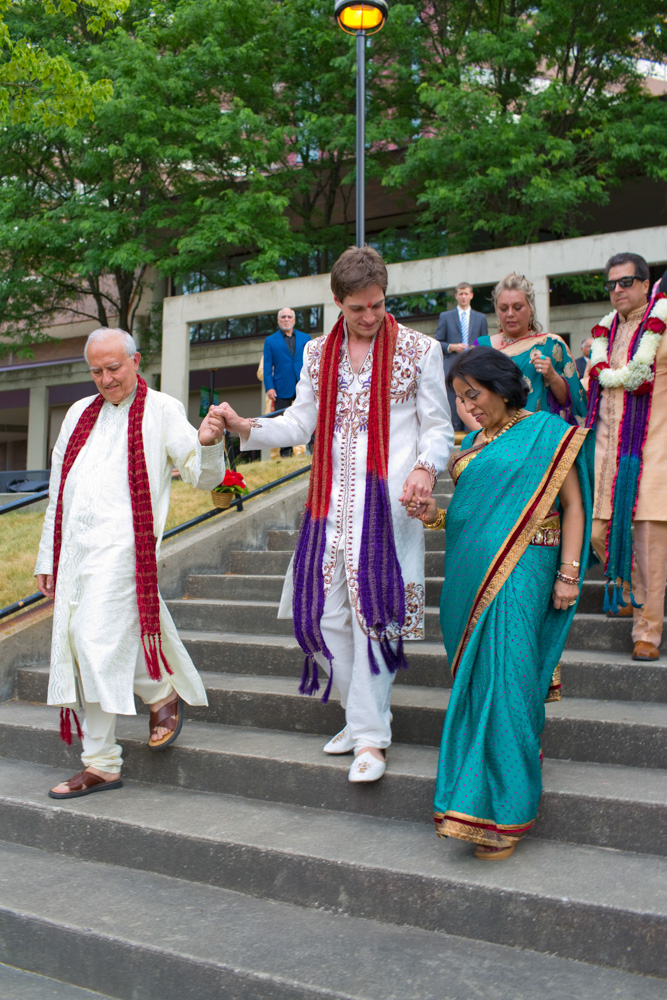 On day three of the celebration was the Sangeet, a party at which friends and family members perform music and dance for the bride. “We both have very artistic families, so we had many dancers and performances,” Sonali says. The bridesmaids and groomsmen performed a choreographed dance medley, and the groom performed a traditional Indian dance with his groomsmen.

Two months before the wedding, Sonali broke her ankle and was told it might not heal in time. “The idea that I wouldn’t be able to dance at my wedding was devastating to me,” she says. So, when her cast was removed, she underwent intensive physical therapy, determined to dance on her special day. She surprised her fiancé by performing a dance for him. “He was blown away!” Sonali shares.

A Hindu wedding begins with the groom’s baraat procession – the arrival of the groom seated on a decorated horse, or in India, he often rides an elephant. “He gets on his horse and comes for his bride,” Sonali smiles. Accompanied by a procession of his bridal party and guests, Brent rode a white horse down the Saginaw Street sidewalk to the popular Riverfront Park, where the bride’s family welcomed him. The couple’s parents walked him to the mandap, a structure used in Hindu weddings, where all of the family members stand with the bride, groom, and wedding party. “It’s a family affair,” Sonali explains. “It was important to me to have the whole family involved.” The Hindu priest spoke in Hindi, but also translated the words to English.

For the ceremony, Sonali wore a traditional red wedding lehenga, then changed into a white wedding gown for the reception. The groom wore traditional garb, as did some family members and guests. Sonali surprised Brent by singing, “The Way I am,” by Ingrid Michaelson, while he watched her on bended knee. The celebration was catered by popular Flint eatery, Grill of India.

On the final day of festivities, a brunch was held at the home of Sonali’s parents. “It was the wedding of my dreams,” says the bride. The couple lives in California, where they are enjoying life together with their first child – a daughter, Malini – who was born last fall. 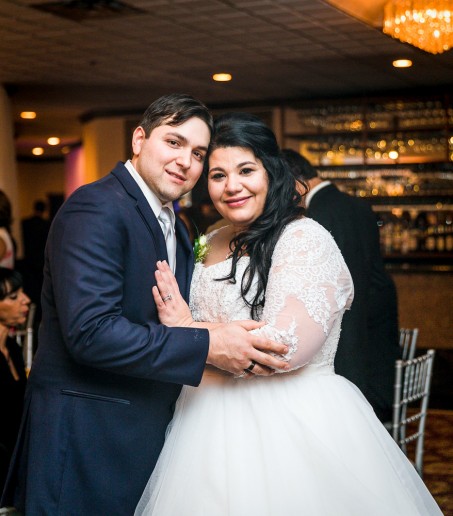 On their special day, this couple’s traditional Greek Orthodox wedding took place at a church filled with family, aunts and uncles, friends – and a lot of love.

Eva and Anthony met when she was a student at Oakland University. “She was sitting outside studying, and I happened to walk by,” he recalls. “I saw her five nights in a row, so I walked up and said, ‘Hi.’” They instantly became friends and not long after that, they became engaged. Having a traditional Greek wedding was very important to Eva. “I grew up in the church and it is part of my Greek heritage,” she shares. Anthony, who was not a member, took the steps and classes to become one. 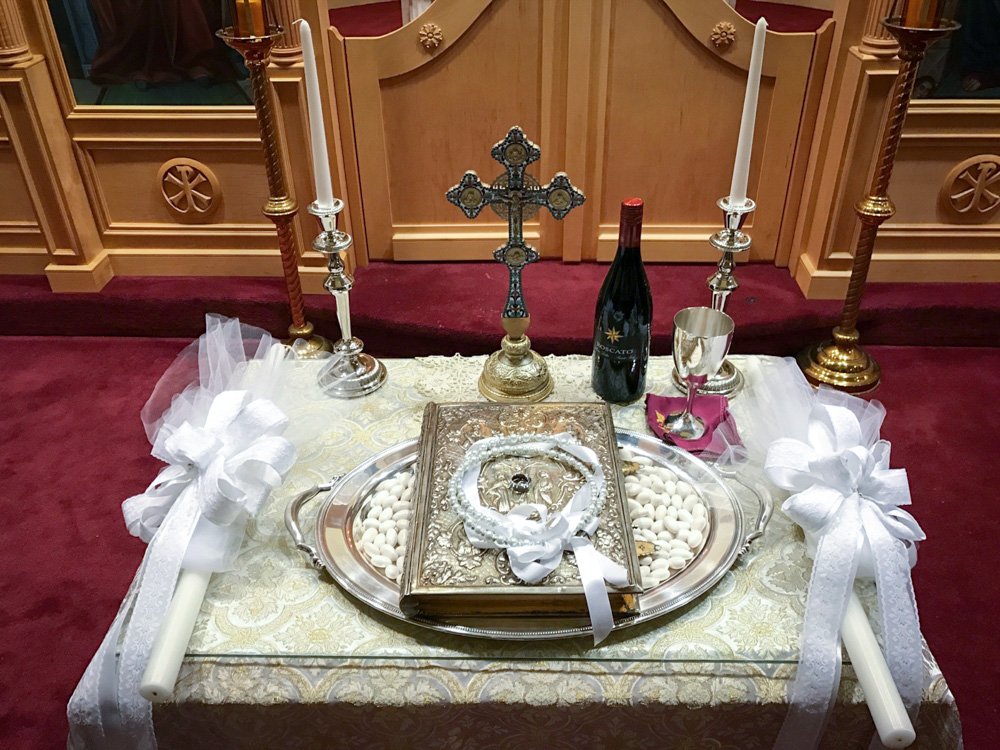 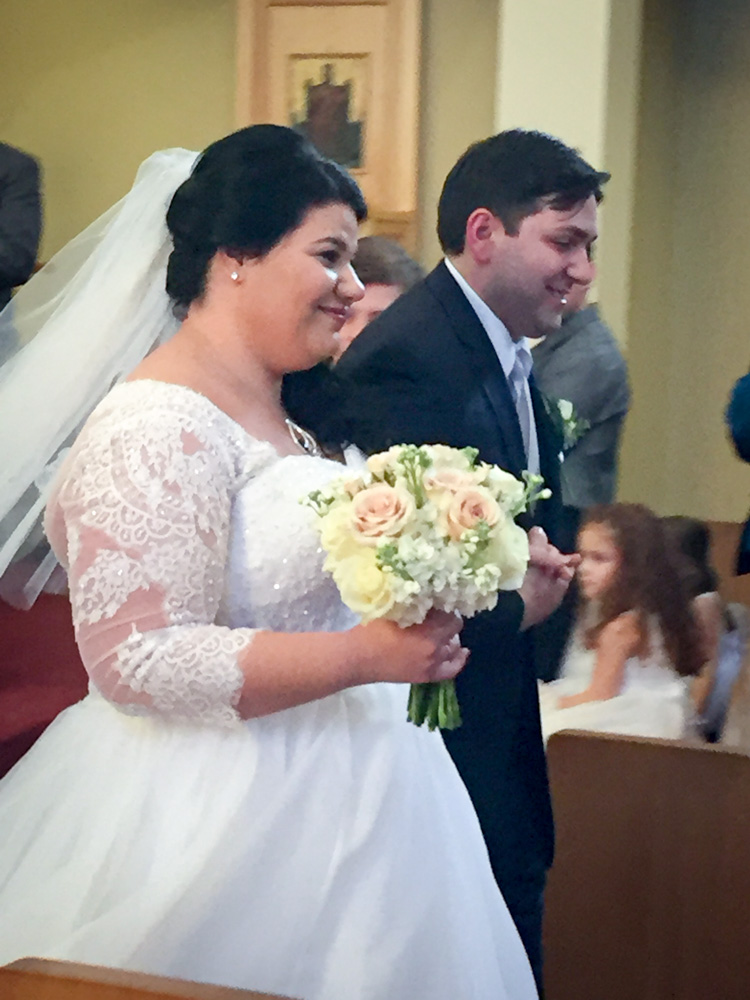 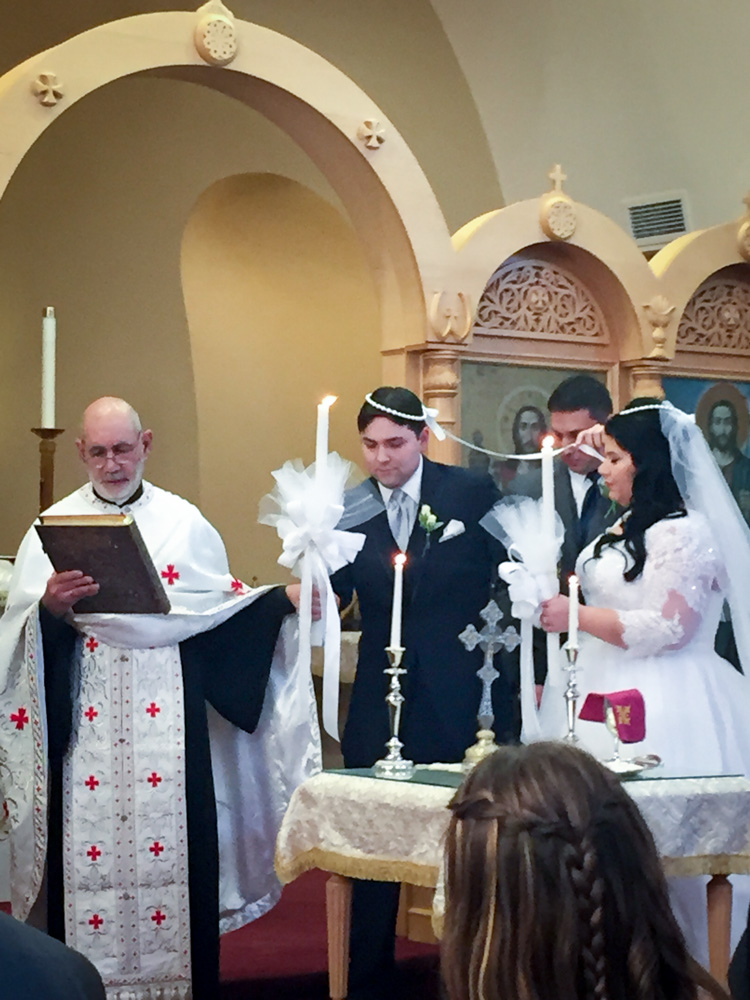 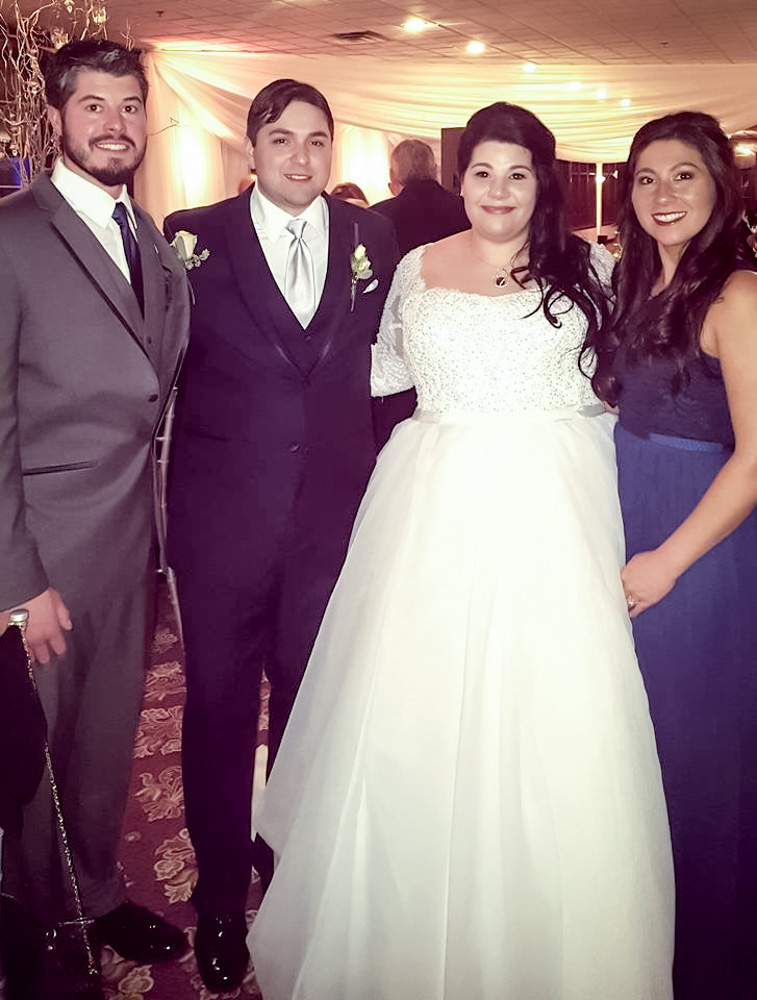 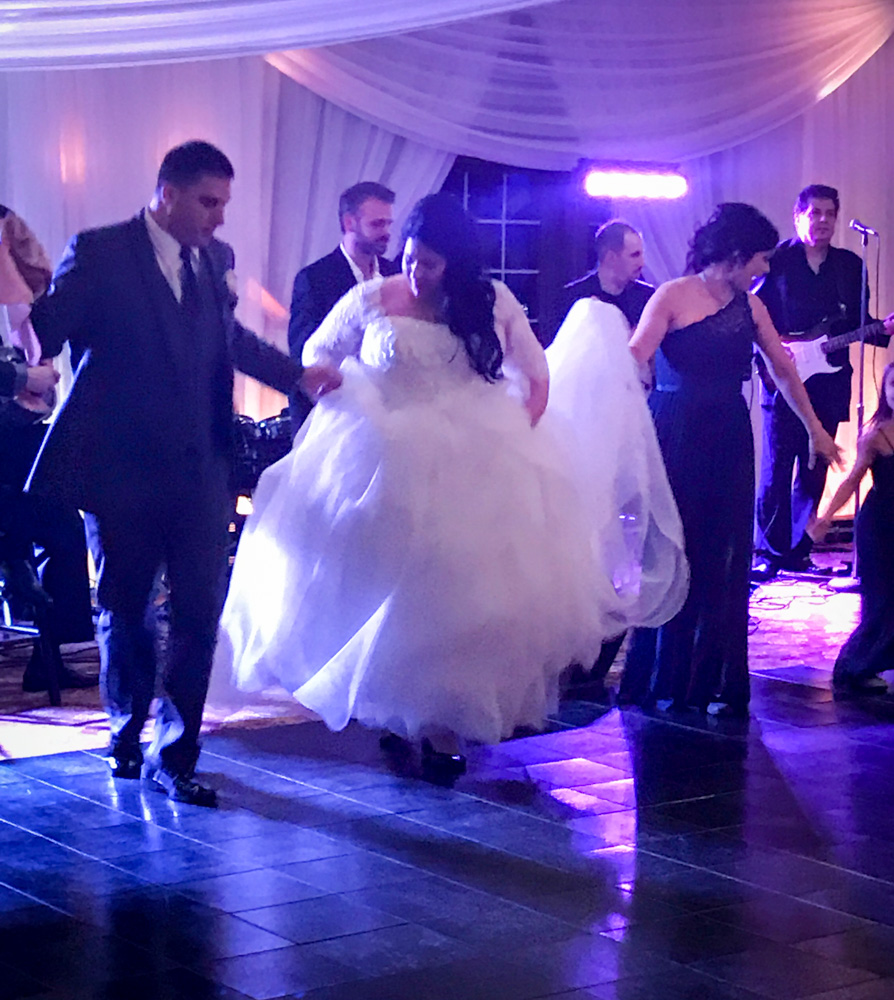 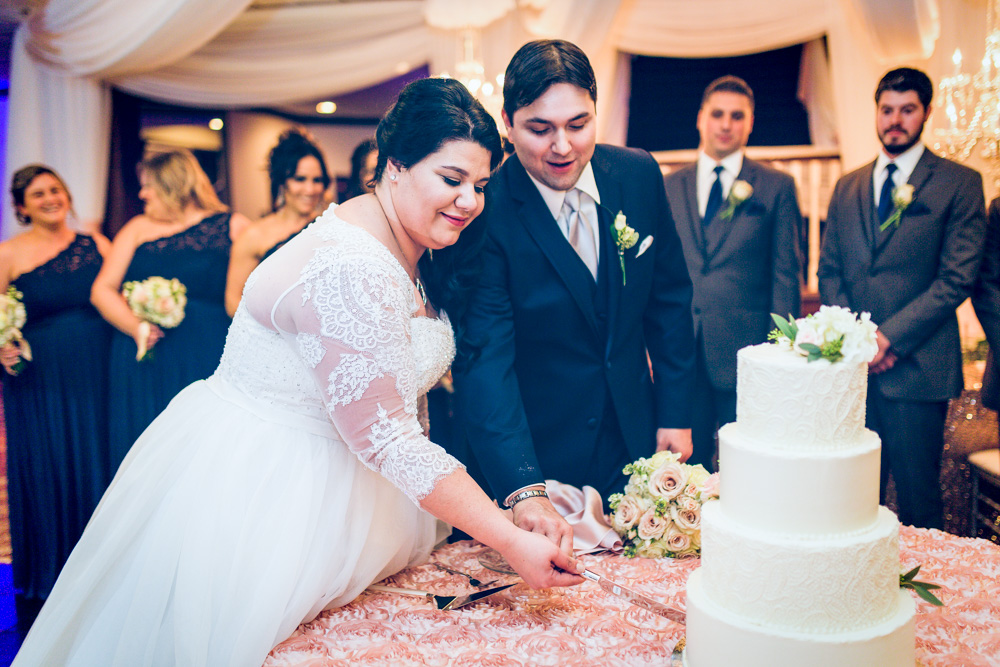 A traditional Greek Orthodox wedding takes place at a ceremonial table, explains Father Angelo Maggos, and the couple doesn’t speak during the ceremony. The only time they say anything is when the priest asks them, “Are you entering this marriage on your own free will?” The bride and the groom are then presented with wedding candles, which remain lit throughout the service.

The wedding is actually two services in one: the Service of Betrothal when the rings are exchanged, and the Service of the Crown. “We both wore wreathes [crowns]that are attached together by a cord,” Eva shares. In the Greek culture, wreathes are a symbol of victory and the cord unites the couple together. The wreathes are worn for the duration of the service. During the Service of Betrothal, the rings are exchanged three times and the sponsors
(the best man and maid of honor) assist in this ritual. Another sponsor assists in the placing of the wreathes. Eva and Anthony chose Eva’s brother, Chris, to be their sponsor: a spiritual advisor and someone who will be involved in the newlywed’s lives. “He is like a brother to me,” Anthony admits.

Another tradition is to drink wine from a common cup. The priest blesses the cup and offers it to the newly-joined husband and wife, representing their equal share in the cup of life. “The sweet, red wine symbolizes the sweetness of the life to come,” Eva says. This is followed by the procession. Fr. Angelo led the newly joined couple around the table – a type of religious dance celebrating the union. After the wreathes are removed, the priest offers a prayer and the married couple leaves the church.

On the ceremonial table is a silver tray that contains Jordan almonds, a symbol of fertility, which are given in little silver boxes to the wedding guests. “The number of almonds is uneven because it can’t be divided by two,” Eva adds.

At the reception, the wedding party performed a traditional Greek dance and the tables were piled high with Greek food and desserts. “It was an incredible spread,” Fr. Angelo shares. A Greek band provided the music. “The guests were all people I grew up with, and all the desserts were made by the church community; there was so much love in everything they made,” says Eva. “I call everyone aunt or uncle because they are my spiritual family.”

The happy couple is planning an August honeymoon in Greece, and they look forward to their life together. “It feels natural to be married to Eva,” says Anthony. “We crossed paths for a reason.” 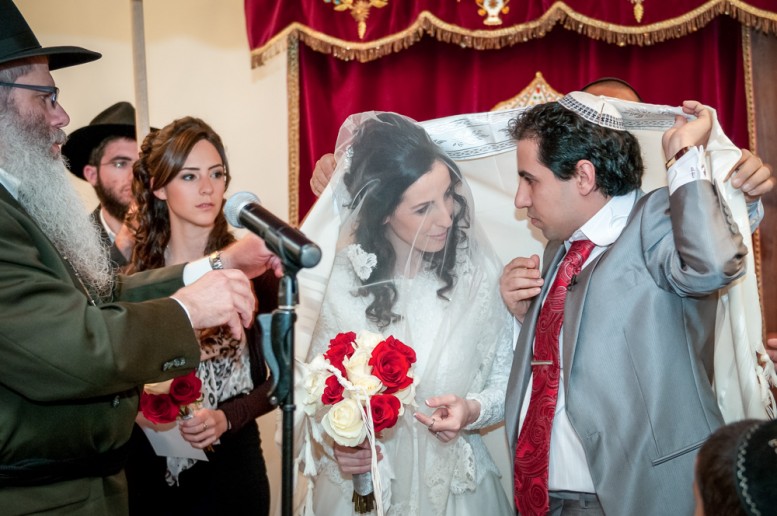 Jewish wedding is filled with meaningful rituals, symbolizing the beauty of the relationship between a husband and wife. The ceremony is performed under a canopy called a chuppah, and prayers are recited from the Old Testament. “The bride and groom do not see each other for five days before the wedding,” Adi explains. “We prepare mentally by praying.” The first time they see each other is at the actual ceremony. “It’s very exciting,” he adds.

The day before the wedding, the bride energizes herself in a purification ritual, which spiritually prepares her for the wedding. “The whole day is devoted to prayer,” says Lee. In a small water reservoir, the bride is submerged three times while special blessings are recited. “It takes away the impurities. It is a very nice, spiritual tradition,” she admits. Lee’s wedding dress was long-sleeved and very simple. “Modesty is a Jewish tradition,” she says. 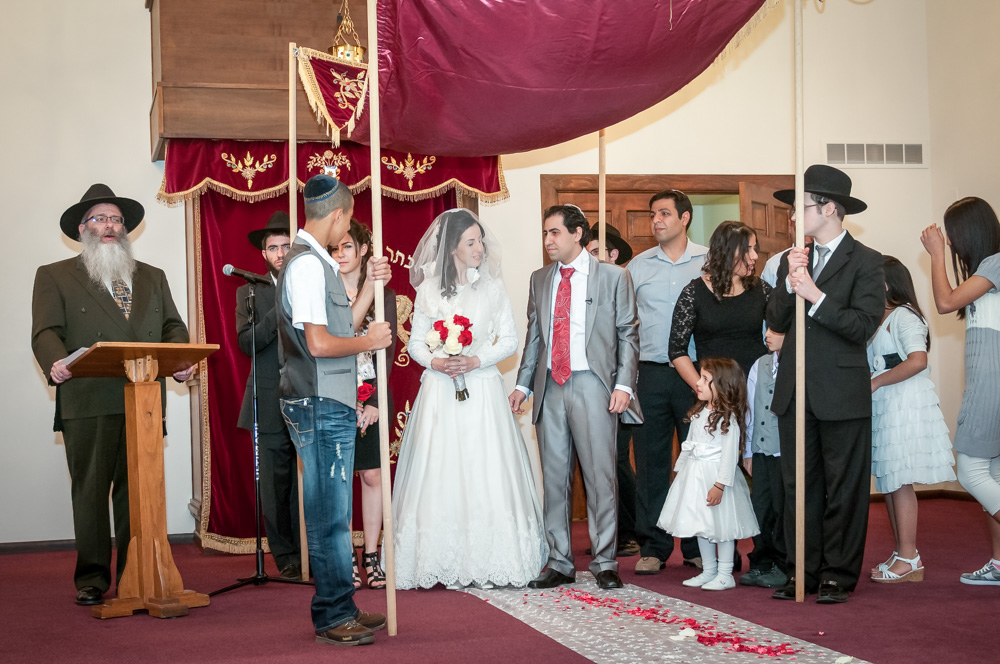 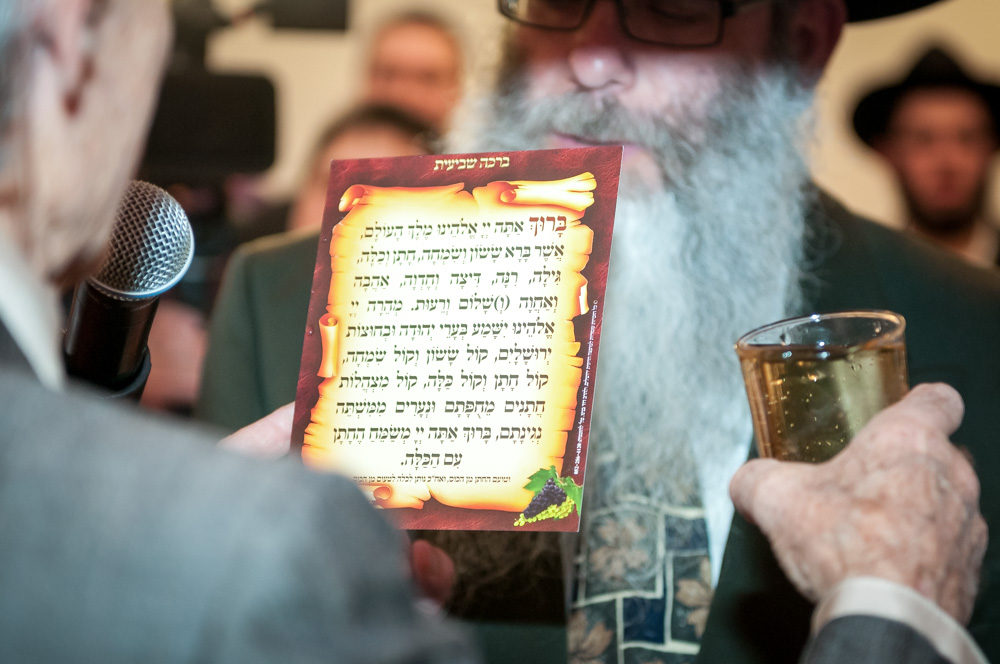 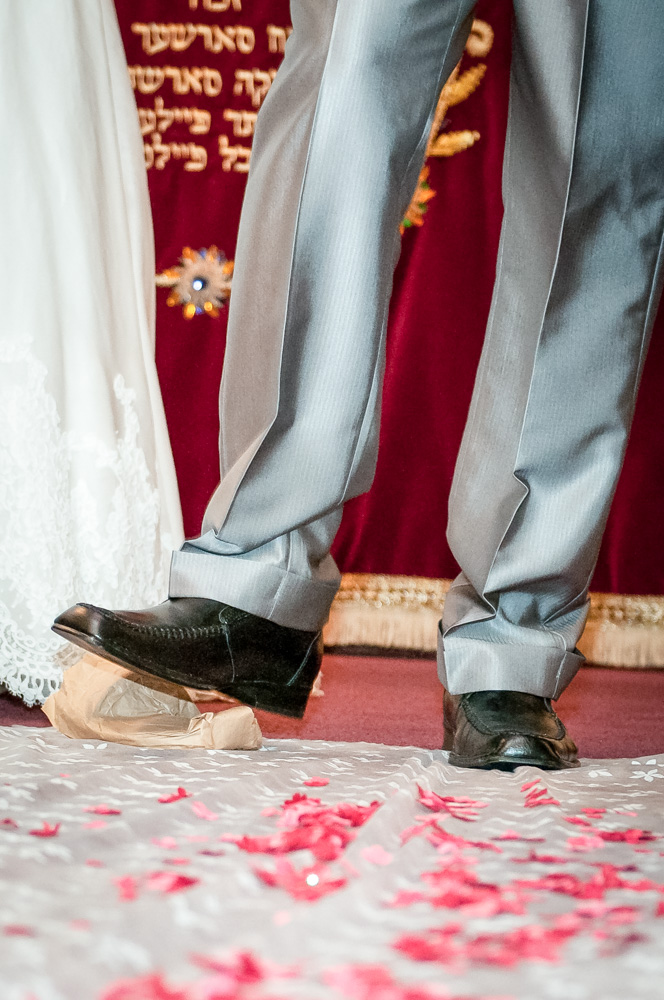 Prior to the ceremony, the male wedding guests spend time with the groom, and the women sit in another room with the bride while she prays. “The women go with the bride to keep her company,” Adi explains. “It is believed that on their wedding day, the bride and groom have the power to bless everyone. It’s one day when the portals of heaven are open and all prayers are answered.”

In a Jewish wedding, the number seven has much meaning: representing the seven days of Creation, the bride circles the groom seven times. The number seven’s biblical meaning is related to the falling of the walls of Jericho. Before two people enter into marriage, there are many “walls” that exist between them. “The couple faces the challenge of breaking down these walls, so that they may become one,” Adi explains.

While the bride and groom drink wine from a cup, seven blessings are recited. After, the ceremony ends with the tradition of breaking the glass, a symbol of the destruction of the Jewish temple. “Breaking the glass also symbolizes our commitment to each other,” says Adi.

Then, the party begins! “We dance and rejoice,” Lee says. Approximately 60 guests joined Lee and Adi in celebrating their special day. The special food for the party must be kosher, and the Twinas’ wedding cuisine was prepared by an Israeli chef from the Detroit area. A delicious, seven-layer wedding cake survived a slight mishap during its delivery. “It looked a little bit like the Leaning Tower of Pisa,” Adi laughs. “But it was wonderful.”

All of the Jewish traditions are important to the Twinas, and they cherish the memories of their wedding day. “Our wedding was beautiful,” Lee shares. “It was the first day of our life as a couple. It was a very spiritual day.”