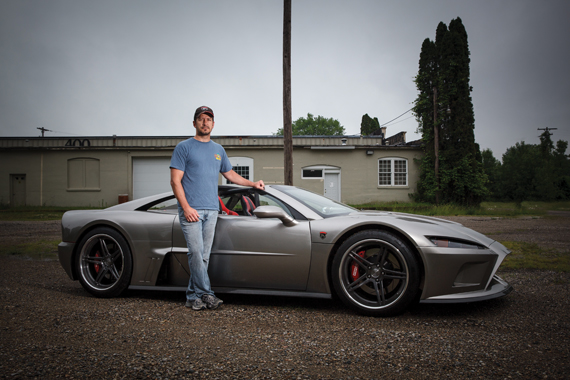 Traditionally, the term “supercar” was synonymous with exotic, foreign brands like Lamborghini or Ferrari (Italian) or Porsche (German). But there’s a new supercar on the street shattering that stereotype, and its maker boasts the Stars and Stripes. Introducing the Falcon F7.

While it’s no shock that an American supercar would be built in Michigan, birthplace of the automotive industry, it may come as a surprise to learn that Falcon is not a Detroit product. The world headquarters of Falcon Motorsports is situated in the village of Holly. Jeff Lemke, owner, was producing aftermarket parts for the Dodge Viper (hard tops and body kits) in his shop until 2009, when he decided to follow his dream of building his own car. He invested the profits from his fabrication work into the creation of the F7.

Each car is made to order, and the timeframe from commission to completion is about four months. Those customers who can afford the price tag are allowed to be part of the design process, with local clients even stopping in occasionally to inspect their car as it is being built. Colors, leather and the finer details are all hand-picked, making this car an extension of a customer’s individual style.

So, what’s an American supercar made of? While the styling and structural components are exclusive to the Falcon, Lemke employs the systems of other automotive companies to give precision and quality to his F7s. The engineering hardware – door latches, control arms, wheel spindles, sway bars, etc. – are those found in Corvette’s highest performing model, the ZR-1. The suspension system is a Penske engineered coilover spring and push-rod type, while the incredibly powerful engine, mid-mounted behind the cabin, is built by Lingenfelter Performance Engineering. Lingenfelter’s 620-HP engine is found on the base model F7, although their 1,200-HP engine is an optional upgrade. The intake is done by Performance Design LLC out of Troy, MI and their unique dual intake adds an extra 60HP to the Lingenfelter engines. While the added horsepower is a bonus, Lemke said, “The number one reason we use it is that it looks extremely cool.” Primarily used for marine purposes, this intake is not designed to fit under the hood of a car. But Lemke built his car around the intake to showcase its raw power and give immense character to the F7 line.

Since the Falcon’s parts are American-made – many off the GM shelves – and not overly specialized, most auto mechanics in the U.S. can service them. Only the Falcon body panels are so specialized that they need special ordering. Serviceability is a key trait that Lemke emphasizes about his car. “Part of the American benefit to this car is that it’s built very American. There’s nothing about it that isn’t readily available or easy to service.”

One hundred percent of the Falcon is assembled in the Holly shop. All the major components – interior, chassis, body panels, etc. – are fabricated in-house and are unique to the Falcon. The chassis is aluminum and all the body panels are molded from a resin-infused carbon fiber/kevlar blend, giving the car a super-light, yet incredibly strong structure that keeps its weight to only 2,800 lbs. The carbon fiber panels have the tensile strength of steel, but with a weight comparable to plastic, it is an ideal (but expensive) material for the supercar. No more than three cars are ever assembled at any one time. “That’s what we use as the goal to stay efficient and still give each car our personal attention,” says Lemke.

The F7 is currently Falcon’s sole model, varied in design only by customers’ specific requirements. There are plans to expand into other designs down the road, but not immediately. “Before we start development,” said Lemke, “we want to make sure that this car is a success, and so far, we’re headed in that direction. Right now the next platform is only in our minds’ eye.”

As the Falcon team stays focused on building their brand, their marketing is taking place on a national scale. “We’re slowly working our way toward the larger, international market. There are big disadvantages in going too fast,” Lemke says, explaining that when contacted by Top Gear, a British television series featuring motor vehicles, he made a difficult decision to decline showcasing the F7 because he didn’t feel ready for that level of exposure. Lemke wants to grow slowly and steadily with feedback from customers, so that when he goes international, he can guarantee quality.

The car’s handcrafted nature is what generates its appeal. “Nine out of ten guys are going to buy a Ferrari or a Lamborghini,” says Lemke, “but it’s that one guy out of ten that we’re after, because he’s sick of those cars. He wants a unique, handcrafted product.”

Just looking at the Falcon F7, everything necessary to understand it is made apparent by its look and aesthetics. The headlight wells slant down in a defiant glare that prohibits comparison to other cars. The twin openings in its hood flare like the nostrils of a bull about to charge; its grill gapes like the mouth of a lion before it roars. The car represents raw power, elegant precision, and unclassifiable character. And this car doesn’t come from exotic, faraway shores. The Falcon was born right here, and its flight will know no bounds.

See more photos HERE, or purchase photos from this story by going HERE and selecting the “Falcon Motorsports” category.