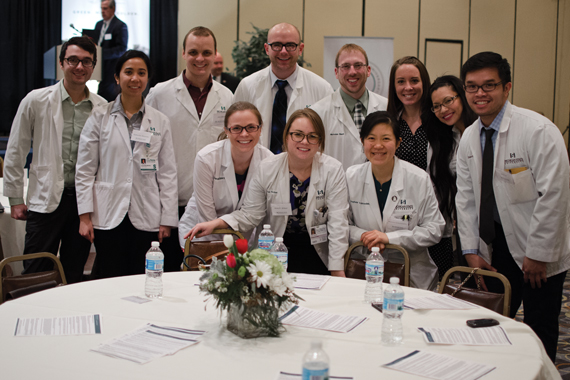 Back in the 1960s, Michigan State University’s College of Human Medicine sought a better way to engage the community while granting their medical students residencies on hospital campuses. Their aim was to form a symbiotic partnership that would not only put students in touch with the specific healthcare needs of a local community, but would also provide that community with a reputable body of med students who would likely hire on as practicing physicians where they had studied. As another example of the increasingly popular “Eds & Meds” partnerships, MSU instituted medical school campuses in six cities around Michigan: Grand Rapids, Lansing, Marquette, Midland, Traverse City and Flint.

The recent clamor created as MSU’s medical program prepares to move Downtown into the former Flint Journal administration building has obscured the Extension’s longstanding existence at Hurley Medical Center. For nearly 50 years, Hurley has housed the Flint extension of MSU’s medical program. The Community Assistant Dean of the Flint Campus, Dr. John B. Molidor, has been a regional dean at the Extension for several years. He admits that MSU’s Flint Extension is popular among potential students of the medical program, but that the general public doesn’t know about the school’s active presence in Flint.

“We were looking for a way to strengthen our relationship with the community,” said Dr. Molidor of the move Downtown. Even though a location separate from the hospital is different from the original community engagement plan, the needs of this community prompted out-of-the-box methods. The creative wisdom and foresight of the Extension’s leaders shows as they evolved and adapted to the community’s needs.

The completed remodeled building will house the College of Human Medicine on the first floor, while public health practice will take place on the second floor and research will be conducted on the third floor. The renovated facility will be surrounded by several other new Downtown developments such as the new Flint Farmers’ Market and the Exploration Park green space planned to replace the Genesee Towers. Molidor puts it best in saying, “The increase in visibility is great,” and it doesn’t get more visible than two blocks in Flint that have seen little change in several years suddenly displaying concurrent drastic changes. All scheduled changes are set to finish within the same calendar year, just a few months apart from one another.

MSU Flint Extension’s effort to move to their new Downtown location has been made with support from the Charles Stewart Mott foundation and Uptown Reinvestment Corporation. Molidor and his colleague Jerry Kooiman, Assistant Dean for External Relations, presented to C.S. Mott Foundation and Uptown their plans to better serve the community after meeting with nearly 80 local organizations to gain a better understanding of how they should focus their medical research. Neal Hegarty of the C.S. Mott Foundation says, “The conversation came from the healthcare community and it resonated with us. We are interested in opportunities for higher education to help our community become a better and healthier place, and all of those things came out of this conversation.” Hegarty also states that the C.S. Mott Foundation “looks forward to building on the strong and robust platform that we already have, and this will hopefully start a long-term evolution that’s great for the economy and the community.” Kooiman pointed out that about 60 percent of residents practice within 50 miles of where they do their residencies. If this statistic remains true, then the impact of which Hegarty speaks will certainly be visible in the Flint community soon.

The official public release of the details of the move Downtown was held in February at the Riverfront Banquet Center. Heads of departments from all three major hospitals along with the Flint & Genesee Regional Chamber of Commerce, current MSU College of Human Medicine students and several city officials celebrated the effort. To reiterate the words of Molidor, this project surely will increase visibility of what MSU is doing in Flint, and the city that has long only chanted, “Go Blue” will soon also find herself just as often chanting, “Go Green!”