Anyone who spends time Downtown Flint has probably seen the work of Paul Everett adorning many businesses, including the signs he made for The Loft and Churchill’s Food & Spirits. And if you’re out enjoying any local, live music – like jazz at Golden Leaf, Soggy Bottom or Churchill’s – you’ve probably seen Pauly there, drawing inspiration from the ambiance. He’s a full-time artist, curator for ArtWalk at Churchill’s, founder of Flint Underground, and a volunteer for art education programs. For Pauly, art is medicine for himself and the community. 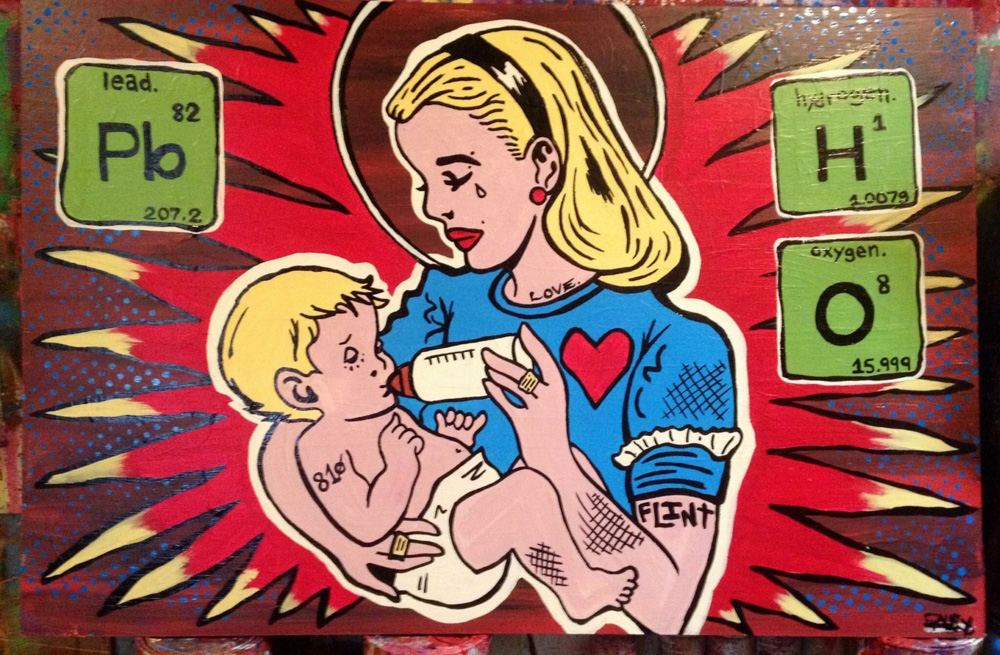 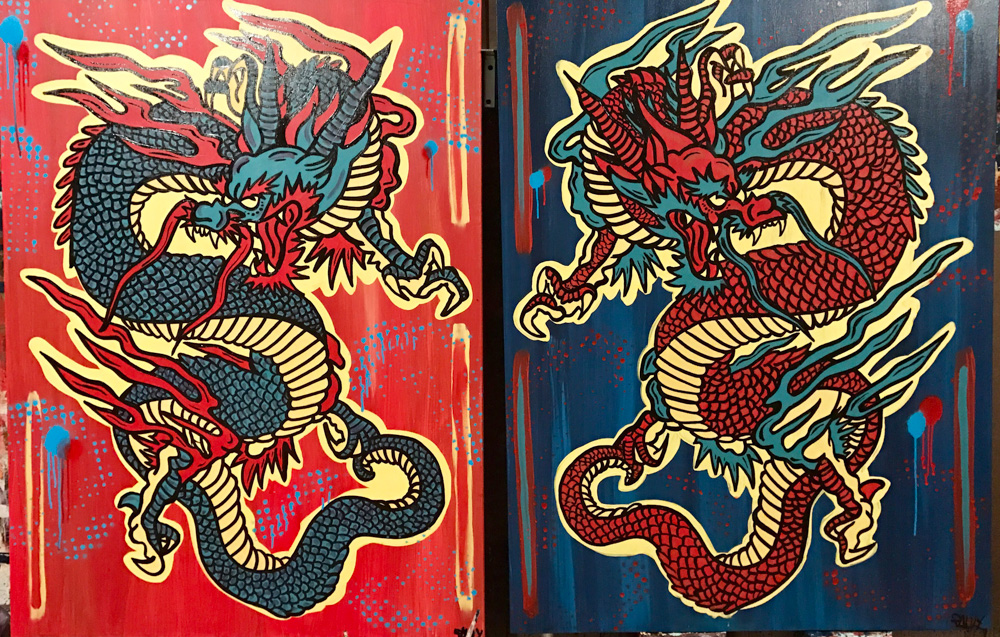 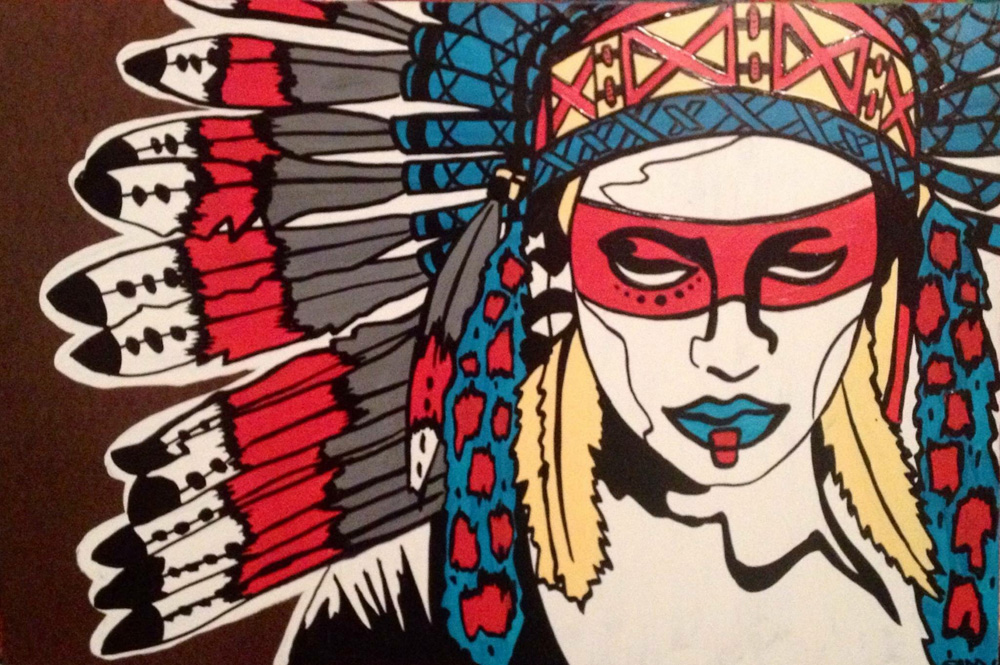 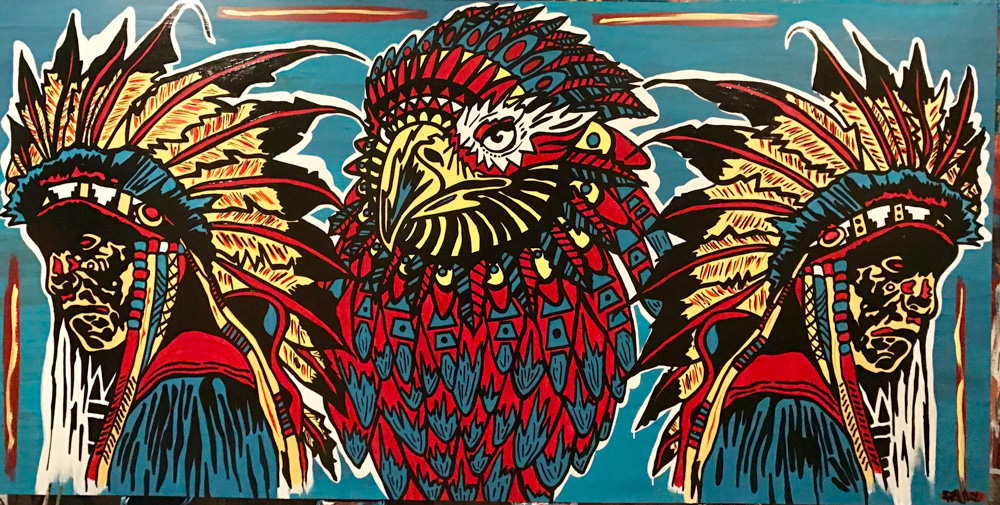 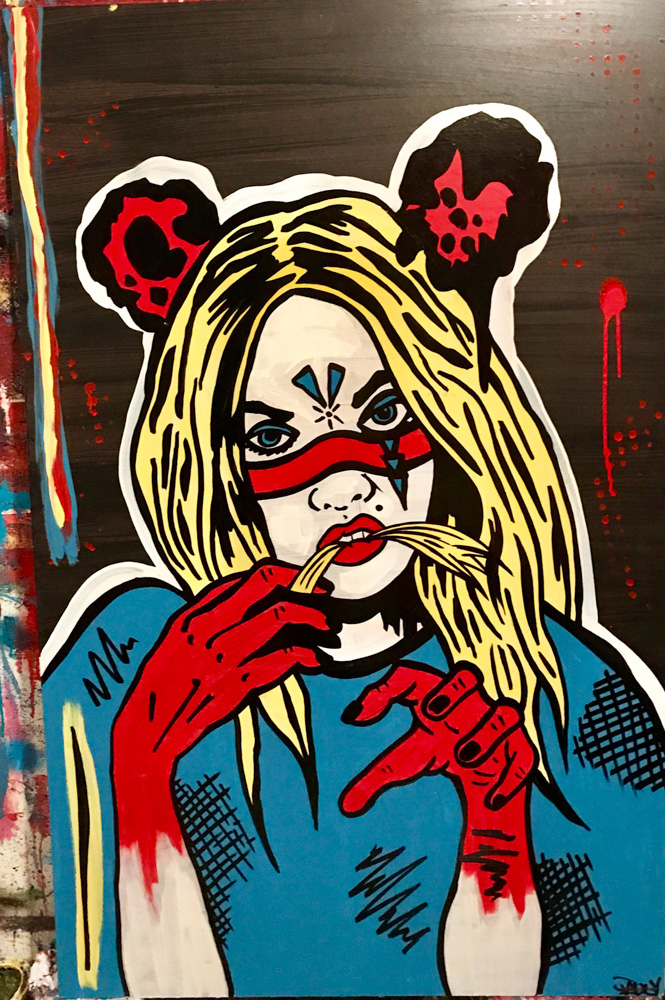 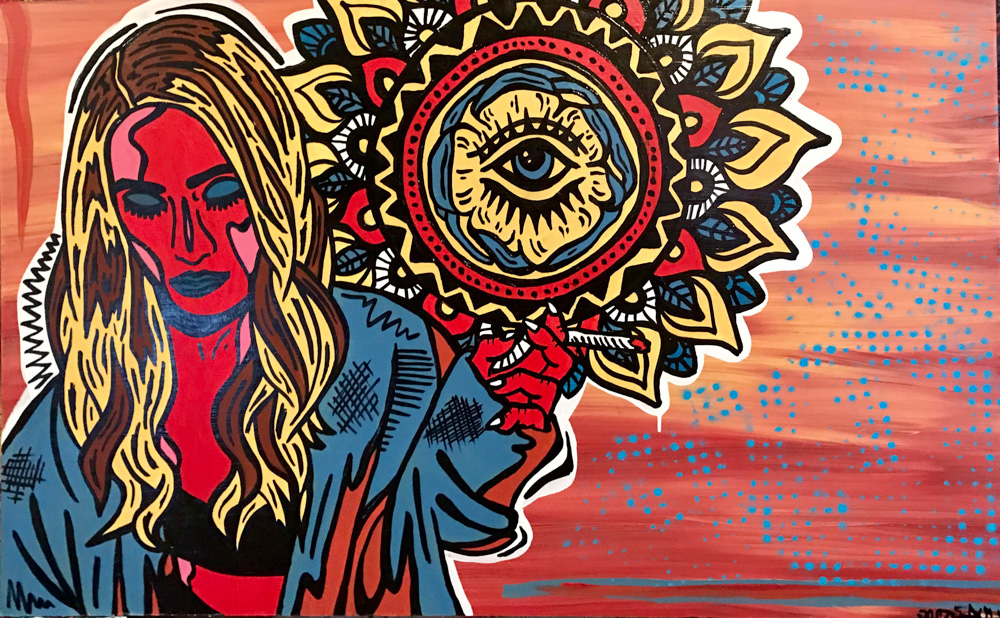 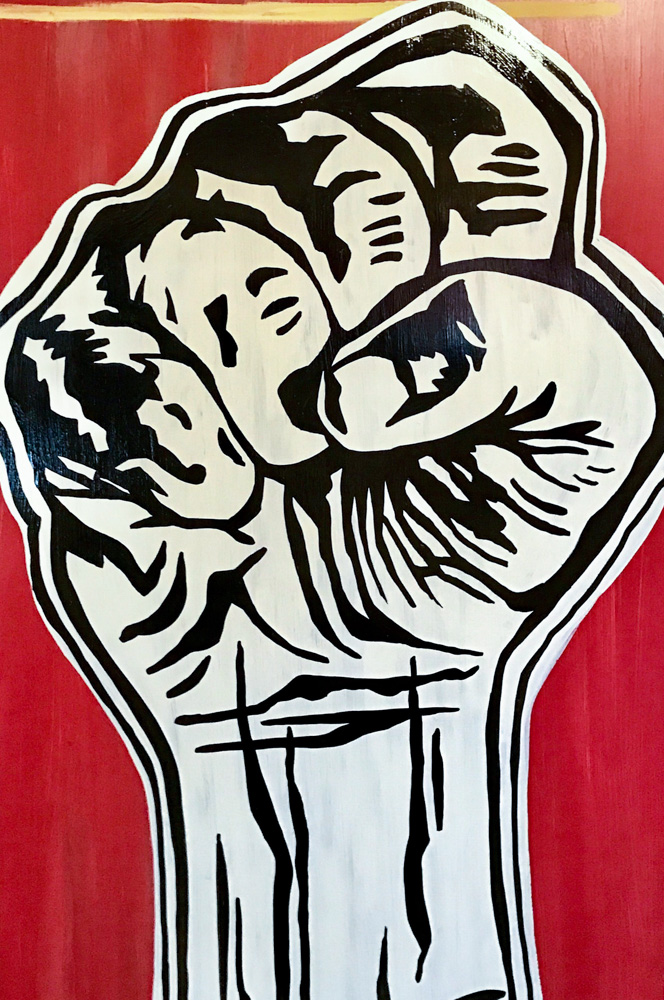 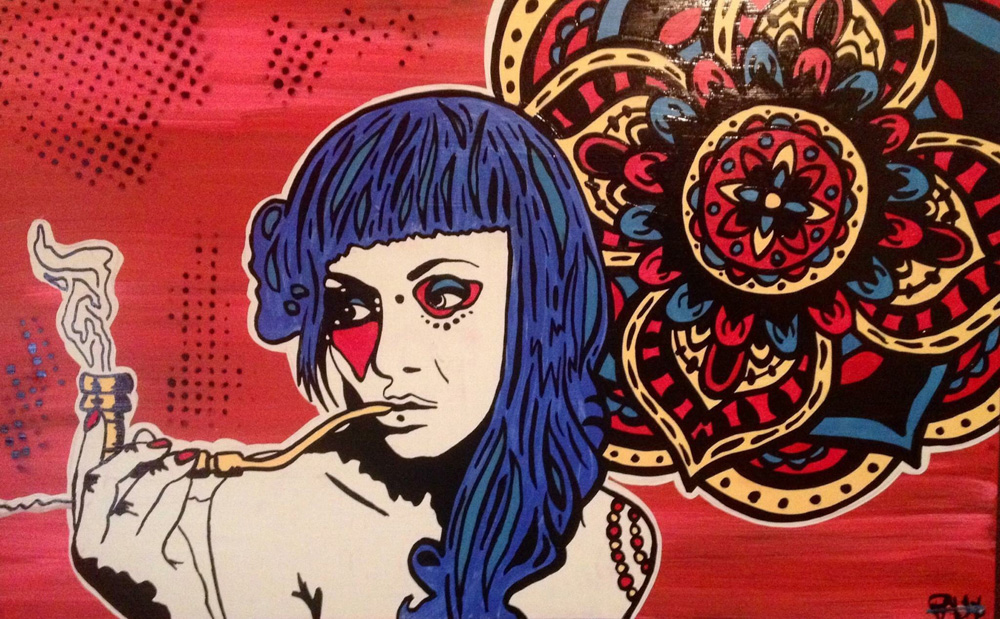 “I cannot go into a museum and not
like almost every piece of art in there.” 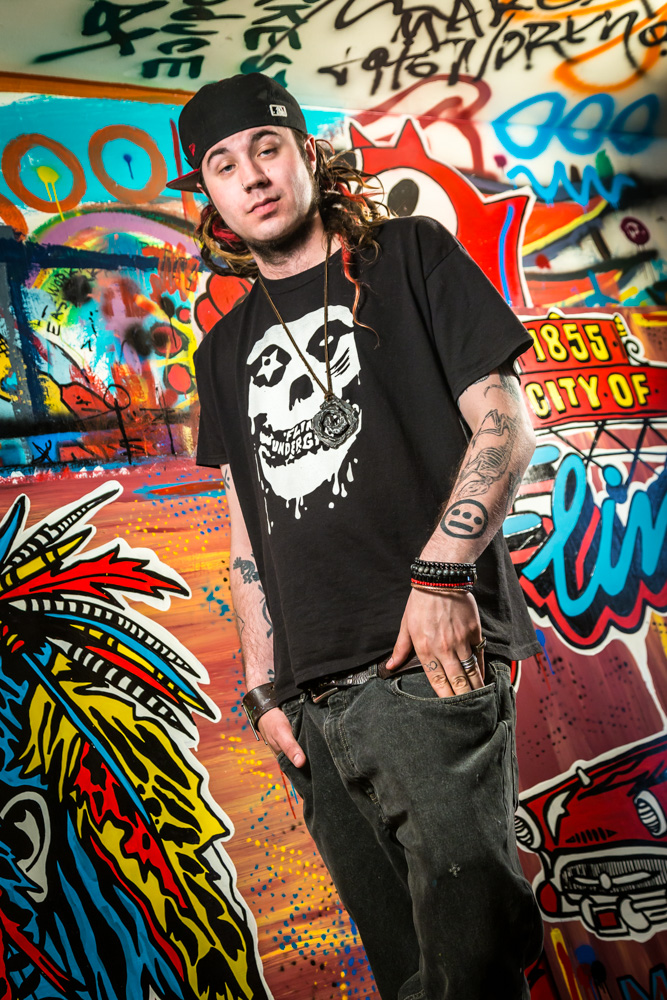 Born and raised in Flint, Pauly recalls that he started painting seriously about 13 years ago. He studied sculpture and painting at Mott Community College, but his greatest teacher has been the experience of attending art shows and museums and soaking up other artists’ work and styles. “I cannot go into a museum and not like almost every piece of art in there,” he says. “I get influenced by most of it – from the Pop Art era, way back to all the creepy, dark stuff you study in art history class.” In his own work, you can see the influence of Pop Art and pop culture, comic books, cartoons and music.  “Definitely music forever,” he adds. Pauly attends live local performances regularly and plays music loudly while he paints – “a lot of jazz and hip-hop as a whole genre.” He also likes to “play around on the turntables and mix beats” for fun. 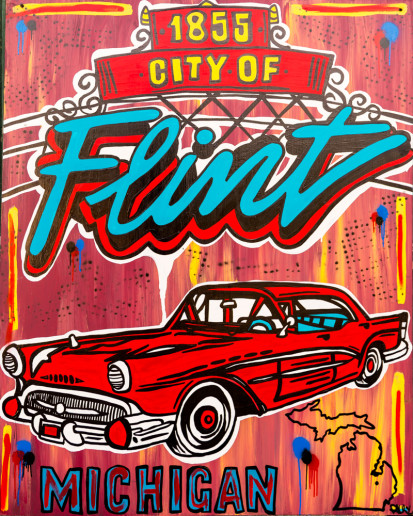 Pauly is inspired most by being around people, so, if there are things going on Downtown, he tries to be a part of it. That is where ideas for his next painting are often sparked. “Anywhere there is good stuff happening, I’ll get an idea and have to put notes in my phone, then I want to come straight home to work on something,” he shares. He maintains an interaction with Downtown Flint, Detroit, Ann Arbor and anywhere else there are art shows and music, and these interactions help him remain prolific. He paints every day and his goal is to always be inspired, influenced by other artists, and producing more work.

Pauly creates mixed media paintings, usually on wood. “Sometimes I use canvas,” he says, “and when I get a chance, I like to do 3D assemblages, but it’s mostly mixed media on wood.” He uses water-based paints like acrylics, latex and enamels and mixes a lot of them himself, “then, I will use spray cans and oil markers on top of that,” he explains. He starts his day by walking his dog, Pete, and then begins drawing. After he has a design fully sketched out, he moves to a blank wood panel and creates a background.“Then, I take my drawings and blow them up on there, and figure out the composition.” He says he likes to try and stay focused and get them done in one session. One painting can have between ten and 20 layers, and Pauly describes the hardest part is that he often thinks and works faster than the paint can dry. “It can be hard to wait between the layers,” he says. 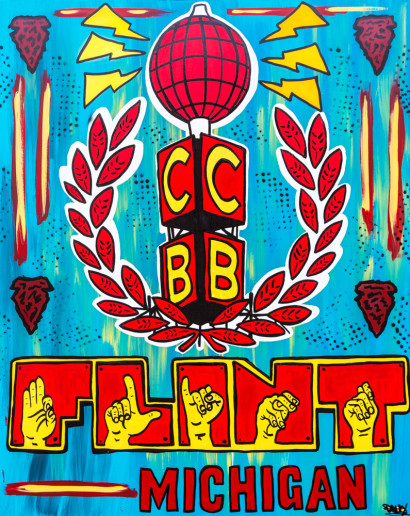 While he says that his main work is spending a lot of time at home painting, Pauly also feels an artist’s role is to be a part of the community and share his work. “It’s for everyone,” he says. He has curated Churchill’s Art Walk exhibit for around eight years. He began by inviting and organizing the artists to display their works, and then added the task of bringing in musicians for Art Walk, as well. He is always learning and taking on more as he goes.

Pauly also founded Flint Underground, which he describes as “a local group of Flint-based artists, musicians, performers, poets, curators, organizers, writers, etc.” They are a loose art collective that began in 2009 after the manager of a gallery in Lapeer, Gallery 194, attended Pauly’s first solo exhibit at The Good Beans Café in Flint. Pauly had invited other artists, poets and musicians to the exhibit opening and the gallery manager liked what they were doing. “She invited us to come to Lapeer and do whatever we wanted, and we called the show Flint Underground,” he recalls.

According to Pauly, at least ten flint artists and musicians went to Lapeer for the first Flint Underground show. “Instead of wine and cheese, there was PBR and pizza,” he smiles. “Not a lot of people came, though, because it was so far away – but that was the beginning.” He says the participants asked each other, “why are we not just doing shows together?” Rather than apply to participate in other shows, they just started doing it themselves. Since then, he has curated a show at least once a month, Art Walk every month, and whatever shows in between he is invited to. He invites the loose collective to work together and those who are available go with him to represent Flint Underground.

For Pauly, community art education is a priority. He has volunteered at Grand Blanc Academy’s Career Day, and at Eisenhower Elementary for the Kids Need Art program started by Stephanie and Brian Hackney. “It’s Flint schools and they don’t have art classes,” he shares. “So, for a whole day, kids would come in and go to every activity station just run wild, and it feels good to do it.” He also participated in an art event at the Applewood Estate where he worked with kids on painting and drawing projects. 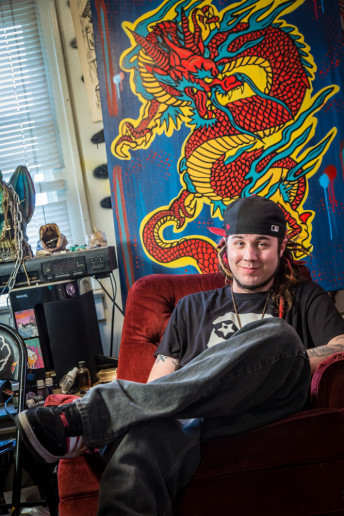 Recently, Pauly tried his hand at converting his artwork into fashion. Using images of his paintings, he posted a mockup for a legging design “and people were into it,” he says. So, he went ahead and had the leggings made. Clothing is something that he is still learning, and while he would like to do skirts, full print t-shirts and hats, he doesn’t want to be “an artist who vends” – he won’t sit behind a table and sell things – “It’s just for kicks,” he adds.

Looking ahead, Pauly would also like to do more art education, in addition to all of his painting, commissioned work and gallery shows. He is excited to see all of the great things going on in Flint lately, particularly the opening of Factory One and Factory Two. “Spring and summer are great for Art Walks,” he says.

Pauly’s resolution for the future is to produce more work and to work on bigger projects that involve more people. He’s always looking for local artists to connect with. Anyone interested in bringing their art Downtown or going with Pauly to art shows is encouraged to message him at facebook.com/ARTBYPAULY.