They may be few in number, but their energy levels, enthusiasm and dedication are seemingly limitless.

This is the conclusion just about anyone setting foot in a Mott Community College wrestling team practice is likely to draw.

Under the direction of a youthful first-year head coach – 25-year-old Aaron Ward – seven wrestlers begin most practices with intense drills before going head-to-head on mats helping each other perfect moves, polish their skills and build stamina.

Assisting Ward is former MCC head coach Winston Ruffin, who guided the program’s transition from club status to an official National Junior College Athletic Association team. That process was completed prior to the start of last season, which was Ward’s first as an assistant coach. 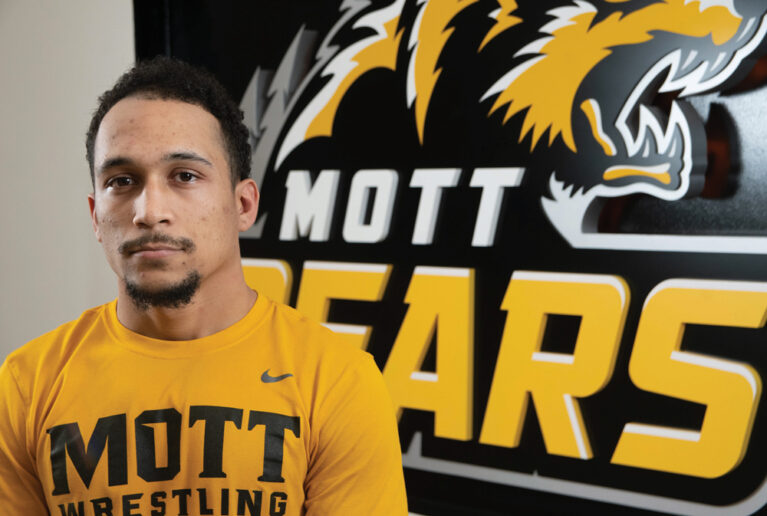 “I love wrestling and love giving back to the sport, so the opportunity to become a head coach has been a blessing.”
Aaron Ward

Still, Ruffin felt Ward was ready to switch roles with him.

“I love wrestling and love giving back to the sport, so the opportunity to become a head coach has been a blessing,” Ward says. “It has been different, though. I’m not much older than the wrestlers which helps as far as getting down on the mat and practicing with them, but now I am the one doing most of the yelling. In the end, I just want to make sure they are doing things right and truly be there for them.”

Ward indeed loves the challenge he has taken on.

The Bears began the season only being able to fill six of ten weight classes and all six wrestlers are in their first year. The lone returnee, NJCAA National Tournament qualifier Brody Kemper, became eligible to compete in late December.

Still, in a classic illustration of quality over quantity, that has not stopped Mott from being ranked 22nd in the nation, just four spots below where the Bears were ranked at the conclusion of last season.

Despite giving up points by forfeiting weight classes, Mott beat Ancilla College in a dual match by a point and lost to St. Clair County Community College by just six points.

“So far, so good – considering our lineup is all true freshmen,” Ward says. “It’s great to be ranked, but I’ve told the guys it’s not about winning this season. It’s most important to get used to competing at the college level, which is an entirely different ballgame. At the same time, I feel we are capable of being ranked in the top ten by the end of the year based on how far the guys have come.”

Grand Blanc graduate William Miller has already worked his way into the national NJCAA rankings, sitting ninth at 125 pounds with a 6-4 record prior to the Bears’ December 18 match against Rochester College. He finished in the Hawks Invitational in Dearborn. 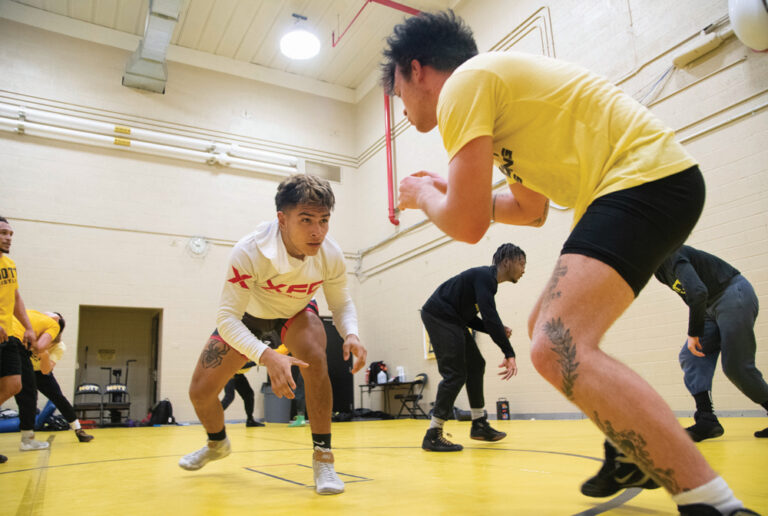 “It’s a great atmosphere, because we all connected with each other right from the first week of practice,” Miller says. “We are also all between 125-157 pounds which means we all have solid practice partners and are not working with the same person every day. That has really helped us all develop.”

The squad has become close-knit away from the mats, as well.

“Just the bus rides to competitions and staying at hotels have been good bonding times for us, along with hanging out together outside of practice,” says Miller.

Everyone in MCC’s camaraderie-filled wrestling room has a unique story of how they wound up there.

Ward and Ruffin actually offered Miller a scholarship to wrestle at Mott after his senior season, but he told them he planned to enroll in a trade school and that his competitive wrestling days were over following a high school career during which he placed fourth in the Division 1 state tournament as a senior. 

Miller also qualified for the state tourney as a junior and finished with a 113-59 record.

“When my trade school plan didn’t pan out, I thought I would just take classes at Mott, but Brody said the wrestling team could probably use me and that I should come to a few practices,” he says. “I was impressed and when the coaches told me a scholarship was still possible, that was it.”

Rodney Richards experienced what Mott’s program is like while still in high school.

He wrestled at Kearsley High School under coach Darnell Ruffin, Winston’s cousin. Every Thursday during the season, Richards, another teammate and his coach attended Mott’s practice and joined in.

“It was a pretty fun experience and I loved how much work everybody was getting in,” Richards says. “They were grinding all day, going at each other nonstop. After practice, they were like family, sitting around, joking with each other, just chilling and hanging. I had to be part of that.”

Richards joined the Bears after qualifying for the Division 2 state tournament twice during high school, including placing fifth in the state as a senior. He finished with a 112-36 high school record and is off to a 7-3 college start. 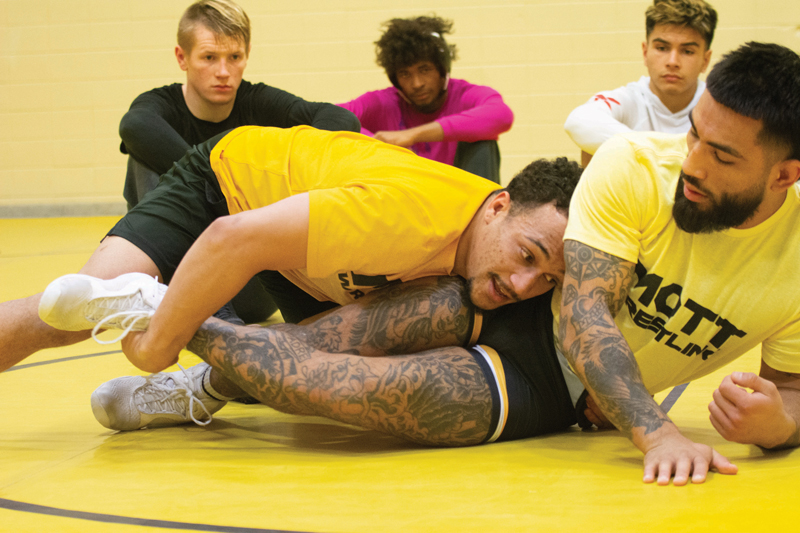 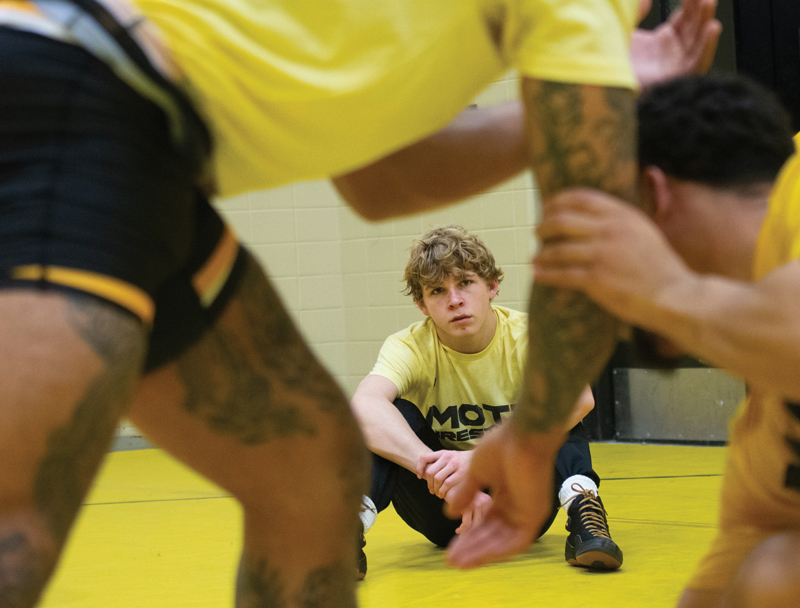 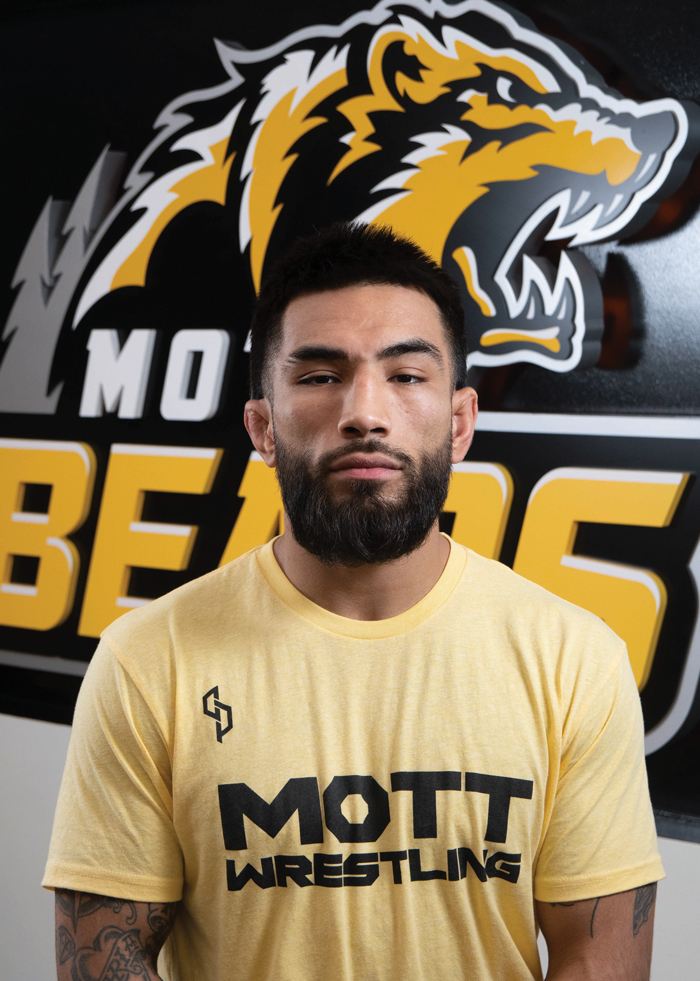 “It’s going pretty good, but I know I need to do more running outside of practice to build my stamina,” says Richards, who weighs less than 150 pounds, but has wrestled as high as the 165-pound weight class to help fill out the MCC lineup. “The guys are certainly more skilled in college. You’re always going to face a quality opponent.”

As for Ward, he began laying the foundation for a coaching career while wrestling under two of the top high school coaches in state history. He started at Stevensville Lakeshore under the tutelage of Bruce Bittenbender, Michigan’s all-time winningest coach with 958 victories heading into this season.

Ward then transferred to Lowell for his senior year, helping the Red Arrows to their second straight Division 2 team state title and first under first-year coach R.J. Boudro, who has won six more in a row since.

Individually, Ward finished sixth in the state at 125 pounds and continued his career at NCAA Division 3 Adrian College. 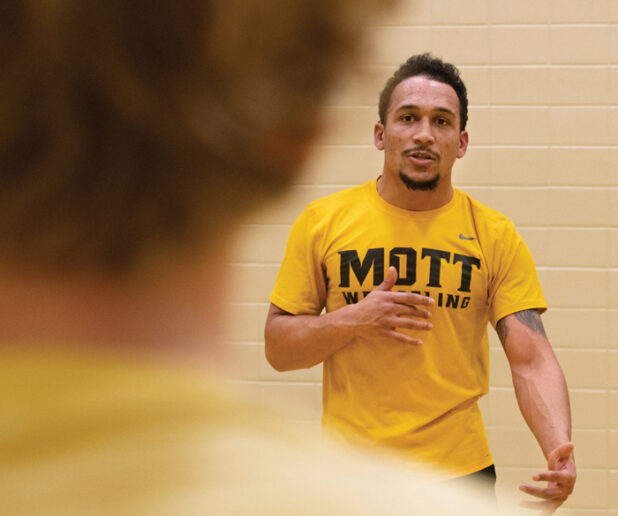 “I was very fortunate to learn so much about coaching the right way from coaches like Bruce and R.J.,” Ward says. “At Mott, I apply things I picked up from them because they both know what works as far as running a quality program.”

After less than two seasons at Adrian, Ward returned to his native Dowagiac on the state’s southwest side and landed his first coaching gig as an assistant on the high school staff for the 2017-18 season.

Ward helped Dowagiac to its first team state quarterfinal berth in 14 years. At the same time, he began feeling he was not done wrestling competitively.

During that season, Ward also found out he and girlfriend Autumn Chapman, a Flint native who wrestled for Kearsley, were expecting a daughter.

That, coupled with a desire to resume wrestling, brought Ward to Mott in the fall of 2018.

As a club team, Mott was a member of the National Collegiate Wrestling Association and Ward finished eighth at NCWA National Championships that season, becoming an All-American. He also won a conference title and qualified for the national championships again the next season.

Winston Ruffin, a 1998 state champion and four-time state medalist for Montrose High School, then asked Ward to remain with the program as his assistant. He helped Ruffin guide the Bears to third in the Michigan Community College Athletic Association tournament and 22nd of 35 teams in the NJCAA National Championships last season. 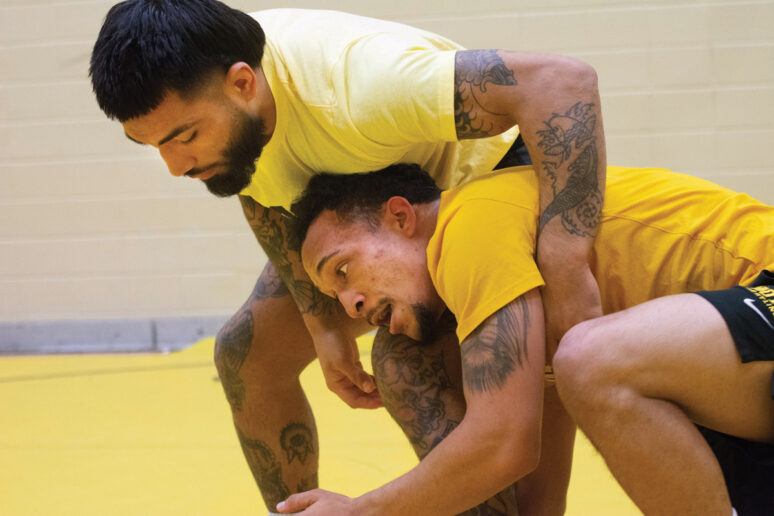 Kemper, who went 3-2 in the tourney, was one of five national qualifiers. A three-time state medalist with more than 150 career wins, Kemper was also third in the MCCAA tournament. He wrestled unattached in the Ben McMullen Open in November and placed third at 149 pounds.

LakeVille graduate Nate Young (141 pounds) was second at the Hawks Invitational. The two-time state qualifier was seventh in the Division 3 state tournament as a senior and finished with a 147-32 record.

Others on the roster are Durand graduate Gabe Fielder (141/149), North Branch’s Gavin Cotterman (133) and Miguel Gutierrez (157), who wrestled for Dundee-Crown High School in Carpentersville, IL. Fielder, a Division 3 state qualifier, finished with a 103-43 high school mark.

“We should be better next season with all weight classes being filled and our returning guys helping mentor the first-year guys,” says Ward, now a father of two. “If we train like we can and peak at the right time, I truly believe we have three or four potential All-Americans and can make the top ten in the national tournament.”