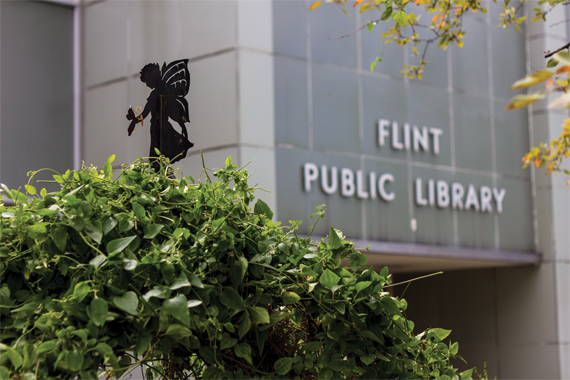 I was seven when I first discovered the magic of books. My mom, frustrated by my apathy for reading, tried as a last resort a Nancy Drew detective novel and told me that I must not skip to the end to solve the mystery. Her plan succeeded beyond even her wildest hopes: in the years following, the only punishment severe enough to get my attention was to ground me from books. Consequently, a library, any library, imparts to me the feeling of coming home, regardless of the city in which it stands. That being said, it is difficult for me to be surprised by a library, for in general, they don’t vary too much. The Flint Public Library, however, did just that. Although undoubtedly one of the most utilized of the establishments in the Cultural Center, I encourage you to rediscover our library: what you find will surprise you!

Chartered in 1851 by the Ladies Library Association – four years before the city itself was incorporated – the Flint Public Library was originally a private depository located at the corner of Beech and Kearsley Streets. It remained in the hands of the Association until 1884, when the ladies offered to give to the city the building and its collection for use as a public library. City officials declined; thankfully, the Board of the Union School District of Flint accepted the offer, and the library was opened to the public that same year.

Today, the resources available at the library are truly astonishing. Patrons have at their fingertips computers for personal use, a computer education lab, quiet reading areas, the area’s largest selection of teen and children’s literature, an extensive CD and movie collection as well as audio books and meeting spaces available for public use; this is not to mention the librarians, whose wealth of knowledge is there for the asking. As Timothy Healy says, “The most important asset of any library goes home at night – the library staff.” For those interested in personal histories, the Genealogy collection contains over 13,000 items, and volunteers from the Flint Genealogical Society are on hand Tuesday through Saturday to assist residents in researching their heritage. In particular, the Genealogical Society has worked hard to gather data specifically for African American ancestral exploration.

One unique asset of the library that sets it apart from many others is the Gloria Coles Black Life and Literature collection, named after the former Flint Public Library Director, which gathers works in a variety of genres related to black culture. As an amalgam of topics, such as biography, sports, entertainment, civil rights, history and spirituality, this collection provides an in-depth resource on the black experience.

Among the rarities collected by the library over the years is a copy of the first American edition of John James Audubon’s Birds of America, acquired in 1871. This book, the largest physical book owned by the library, is also the most valuable: Audubon’s work is known worldwide for its beautiful ornithological illustrations. A page of this folio, which can be viewed in a glass case on the first floor, is turned every week in keeping with the tradition of other holders of Audubon’s works. Also residing in the glass case is the library’s smallest book, a pocket dictionary from 1836 measuring only three inches long.

If statistics are any indication of popularity, then the library is the prom queen of the Cultural Center! It receives over 900 visitors each day, and hosts approximately 450 computer sessions in the same timeframe. Director Kay Schwartz says there is no doubt that the city is loyal to its library. “We’ve received a tremendous amount of support from the community,” she explains, citing the passage of three millage proposals over the years as proof of residents’ devotion. Despite the votes of support, the library is struggling to continue its many programs, due to the suppressed value of real estate. “We want to continue to offer the variety and depth of resources for which we’re known, but in order to do that, we can no longer rely on public funding alone,” says Ilene Harris, Director of Development.

Fundraising for the library does not require a minimum donation; one of the most popular fundraisers is the purchase of a book-shaped paper plaque with the donor’s name on it for only a dollar. Many local children have their names proudly displayed on the walls of the library’s main floor. “We’ve received gifts of all sizes” says Kay, “and every dollar helps us reach our goal of $250,000.” In fact, to date the library has raised more than 75 percent of their goal. Have a dollar? You can help! And if you’ve never been, check out all of the great events, people, and resources at our city’s athenaeum (hey – a place devoted to words is worthy of a fancy appellation!).

Are you interested in purchasing photos from this story? Go HERE and select the “Flint Public Library” category.