Our beginning is found in the Genesee town
that the hardiest folk call home.
It starts with the plan of a wealthy man
by the name of Oren Stone.

Old Oren was handy, auspicious and dandy
His product was good without fail.
At Flint Woolen Mills, he finished his frills
And moved them at once to sale.

Blankets and hosiery, socks with gold toes
were offered at competitive prices.
But more loved than those, as the majority chose,
Oren’s pantaloons were always the nicest.

Made to fit every man, if they walked or they ran
or a woman if ever she wanted,
those pantaloons cared neither hide nor hair
on whose hips they were devilishly flaunted.

Now, for many a year, and without any fear
Oren pulled in more than expended.
But when Gorman came, it just wasn’t the same
and the mill practically ended.

“We’re losing funds, we’re on the run,”
he chattered to his wife.
“Every mill has taken a spill –
we’re fighting for our life!” 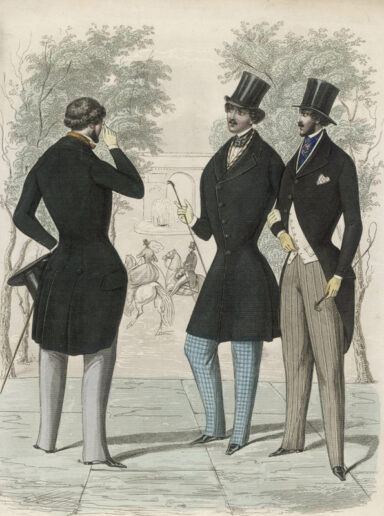 He took great pains and racked his brains
trying to fix the problem.
Nothing he found turned things around
and he was about to hit rock bottom.

Then at a play, Stone’s Opera House way
the safest place in town,
during “La Boheme,” toward the end
an answer would be found.

While spending his time, drinking wine
on the balcony overlooking the stage,
Stone had a slip and on his pants he dripped
a river of wine, nicely aged.

“Why, you’ll have to go home,” said his wife with a moan.
“You can’t possibly sit in a puddle.”
But Oren got wise, with a lake on his thighs,
ran back to his workshop to muddle.

“Traxler, my man!” he said to his friend,
“Our problem is soon to be fixed.
Bring me the ingredients and please be immediate
All must be properly mixed.”

Once he received all he would need,
Stone threw his pants in a vat.
In with them he tossed a vial of high gloss
and a can of southern goose fat.

In went some wax, then some edible flax
with a small touch of honey for taste;
next, without falter, came a barrel of water –
the mixture came up to his waist.

“Now, please turn your back,” said Stone for effect
“that I can add the secret of style.”
With a pour and a swish, it was properly mixed.
Stone wrote it all down for his file.

“Now fish out those pants!” Stone said with a dance.
“I think you’ll find they’re the best that I own.”
“Why, they’re not wet at all,” said Traxler, so small
“the pants are as dry as a bone!”

“Aha! There lies the trick! The pants are incredibly slick
and water, once out, can’t get in again.”
With a twirl and with flair, Stone brandished the pair,
“See, they’re great! Positively Neptunian.”

What can you say? On the very next day,
Stone took his new pants to the store.
In no time at all, came an end to his fall
as his orders started to soar.

“Come one! Come all!” came Oren’s call.
“These pants resist the essence of wet!”
“After spilling your beer, all over your rear,
You’ll still be the driest one yet!”

As part of a trick, he was able to pick
a damsel to put on a pair.
He splashed in her face a bucket well-placed
of a tea that tasted quite fair.

With a choke and a sputter, she called him a nutter,
dripping all over the ground.
But as soon as she checked to see what was wrecked,
she found the pants perfectly sound.

“You see what I’ve got, you silly old sots?
My Neptunian Pantaloons!
With these four-dollar pants, you won’t miss your rents,
or rainy-day afternoons.”

With fistfuls of dollars and loud, greedy hollers,
the crowd wanted all they could take.
They bought every last one, and then just for fun,
Put them on and jumped in the lake!

Okay, I took liberties … a few. (We’ll get to that.) When researching Oren Stone and the Flint Woolen Mills for this month’s story, I coined the term “Oren Stone and the Neptunian Pantaloons” to which our editor replied, “that sounds very Harry Potter.” I agreed, and then realized that it also sounded very “Lewis Carroll.” After that realization, I simply couldn’t resist having a little fun with it. 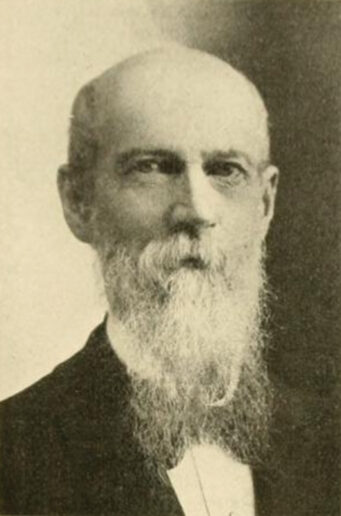 Oren Stone opened Flint Woolen Mills in 1867 to provide relief to local farmers who were finding it too expensive to ship out-of-town for processing. Initially, the mill was extremely successful and Stone opened a second in 1879 and soon a third. In 1886, he leased one of his buildings to Durant & Dort for their road cart business (Factory 1). The Flint Woolen Mills produced blankets, flannel, mittens and hosiery in cashmere and other threads. In 1896, Congress passed the Wilson-Gorman Tariff Act which damaged the success of many woolen mills throughout the country; nearly 40 percent closed. Stone’s business also suffered. Around that time, he opened the Flint Pantaloon Company with his friend, David Traxler. (Stone also partnered with William Atwood on multiple ventures.)

In 1897, Stone died and was buried in Glenwood Cemetery. In 1898, Traxler and associates introduced the Neptunus Cloth by making the claim that it was impervious to water. (It’s here that I took the liberty. In actuality, Oren Stone was gone when Neptunus was introduced, but “David Traxler and the Neptunian Pantaloons” just didn’t work, man.) The fabric was a hit and the company was selling a half million yards of Neptunus annually. 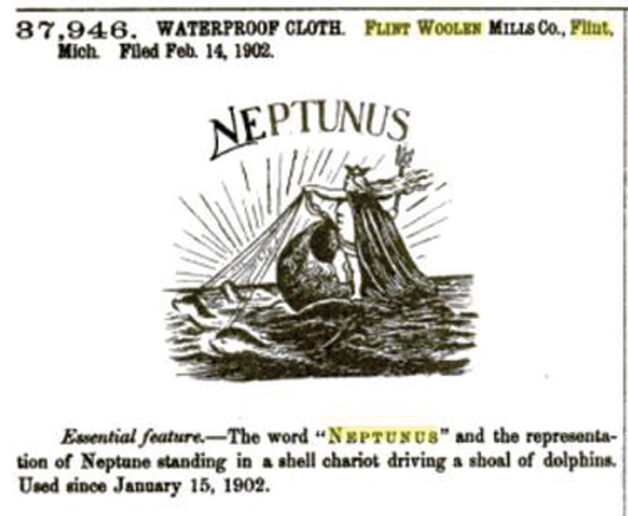 As the automobile business caught on, the owners of Flint Woolen Mills refused to make fabric for automobiles and ended sales to jobbers (wholesalers), preferring to sell directly to retailers and consumers. Both decisions were ultimately bad and the company went out of business in 1913.

Oren Stone played a large role in the establishment of Flint. Besides operating Flint Woolen Mills, he owned Stone’s Opera House (dubbed “the safest place in town”) and was mayor of the city in 1888.