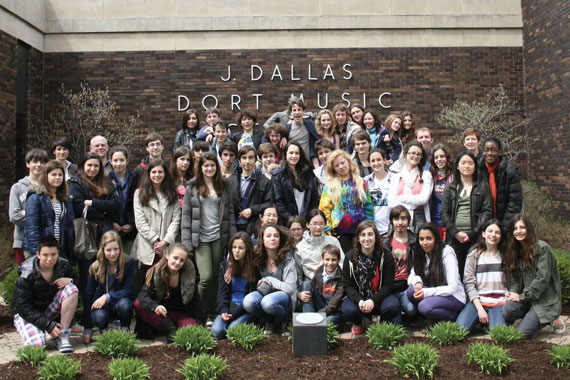 Étienne Brûlé is the first known European to reach what is now the state of Michigan in 1622, and Father Jacques Marquette established Michigan’s first permanent European settlement about half a century later, christening the place Sault Ste. Marie.

Both men were French.

Often the history of Michigan’s Franco-foundation goes unrecognized—with the exception of the facetious French pronunciation day-twah for Detroit—so it is especially auspicious when French nationals find their way over to what was once called New France.

In May, The Flint Youth Symphony Orchestra had the opportunity to serve as host to the Courbevoie Youth Orchestra of France. FYSO also provided a similar service to the Limonest Youth Symphony of France back in February. The students gave several performances while in town, but they also had the chance to enjoy highlights of the Flint area, and even a Detroit Tiger’s game. Violinist Florian Degornet of the Courbevoie orchestra was extremely excited to be in America. “I have really enjoyed it here,” he said, “Everybody is really nice to us. I think American people are kind, like French people. Everywhere we go is amazing!” Regarding the Tiger’s game, Degornet agreed with the notion that attending a baseball game is a very American thing to do. “Yes, it is kind of cliché, but it was really great,” he smiled.

Laurent Brack, conductor of the Courbevoie Youth Orchestra, mentioned that this was his first time back in the U.S. in many years. “I was here before as a child, and it’s just like I remembered it.” He went on to praise the FYSO and the members of the community who opened their homes to serve as hosts to the French orchestra students. “Everyone is really nice, and the hosts have been very hospitable.” And while the impression that Flint made on their French guests was significant, the French students also left quite an impression on the people of Flint. J.J. Shaver of the Flint Crepe Company recounted how he tried to explain to the foreign students what a “soul food crêpe” is, which proved a difficult task, given their lack of knowledge about soul food.

On May 2, the Courbevoie orchestra partnered with the FYSO students at Lake Fenton High school for their final performance before leaving town the following morning. The concert was free to the public and featured pieces by several classical and contemporary composers, including Mozart and Beethoven, as well as a “James Bond” melody and the theme from the hit movie, “Pirates of the Caribbean.” The Lake Fenton High School Symphonic Orchestra opened the night’s program. FYSO Director, Davin Torre, was impressed by the success of the performances and also by how well everyone worked together to bring the performances about. “We all just jumped right in and got it done. Everyone was helpful,” she said.

Director Brack was also impressed with the success of the orchestra’s stint in America, and he looks forward to another trip to Flint in the future. “Look for us again in about two years,” he said. Stay abreast of the FSPA schedule in the coming seasons to enjoy similar events. Don’t miss out on an opportunity to experience excellent performers from around the world through the Flint School of Performing Arts!