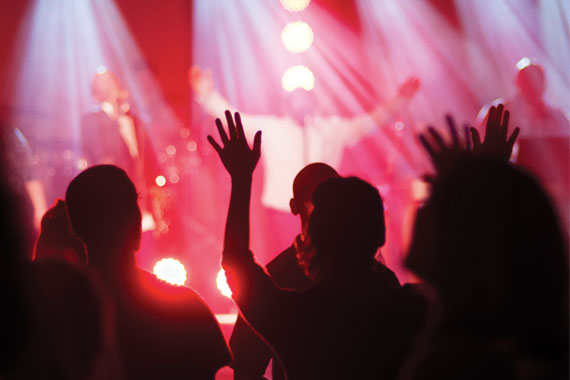 April 20 saw the 2013 return of One Worship, a major live Christian music event put on by local young adults, which aims to bring people from several different churches and denominations together for a night of collective praise and worship. The event was first held in February of last year, and was so popular that a total of three meetings were held in 2012, alone. This year’s premiere event was held at the Riverfront Banquet Center in downtown Flint.

Unlike many other local faith-based events, One Worship is not affiliated with any specific church; instead, it is independently organized by young adults aged 20-35 who attend different churches throughout Genesee County. April’s event drew over 100 attendees, many of whom became aware of it through word-of-mouth and social media posts.

The night consisted of about 90 minutes of live musical performance and song, interspersed with messages from two speakers. One speaker, Doug Slayton, explained why One Worship is so powerful: “I like that the event is not asking for people to come together in order to change and be more alike. It’s the idea that people with different languages, faiths and churches come together for Jesus, and no one is asked to leave and become someone else, first.” Besides the event’s concept, Doug went on to laude the musicians. “The music was incredible,” he said.

Indeed, the tenor of the night was one of unity. Derek Turcsanyi, one of the performing musicians, commented, “There are invisible walls that separate people, so we just say, ‘Hey, you love Jesus. Let’s set aside the little things that separate us and celebrate God together.’”

Derek mentioned the diversity he saw in the turn-out as an indicator that One Worship was achieving its goal of bringing people together. “I thought we achieved a good mix of people,” he said. “When we’ve done similar events before, it seemed I saw the same people, but that was not the case this night.”

When asked why he thought the event was important for Flint, Derek elaborated on his dream of unity by saying, “Unity combined with something done well brings people out and brings people together. Attendance like we saw shows how important an event like this is to the city. It shows that people care about Flint.”

The coordinators of One Worship plan to do another event in October of this year. As always, the forthcoming event will be free of charge and open to the public.

PHOTOS BY MARK BLAINE OF THE SPENCER AGENCY