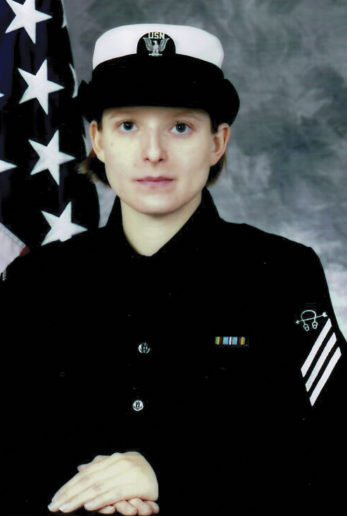 When Katrina Berger was 17 years old and fresh out of high school, she had no idea what she wanted to do next in life. Raised by a single mother who worked two and even three jobs to support her three daughters, Katrina’s life hadn’t always been easy. “I had received a few small scholarships, but I didn’t want school debt and I didn’t know what I wanted to do for a career,” she remembers. So, she walked into a recruiting office in Port Huron and enlisted in the U.S. Navy – a decision she has never regretted.

Berger served from 1999-2005. After boot camp in Great Lakes, IL she trained in San Diego, CA to become a sonar technician. Next, she spent four years on a ship, first stationed in Yokosuka, Japan aboard the USS O’Brien DD 975. She was a Sonar Tech 2nd Class Petty Officer E5 when her military service ended. She traveled the world with port stops in Darwin, Australia; Bahrain; United Arab Emirates (UAE); Phuket, Thailand; and Singapore. This is her story. 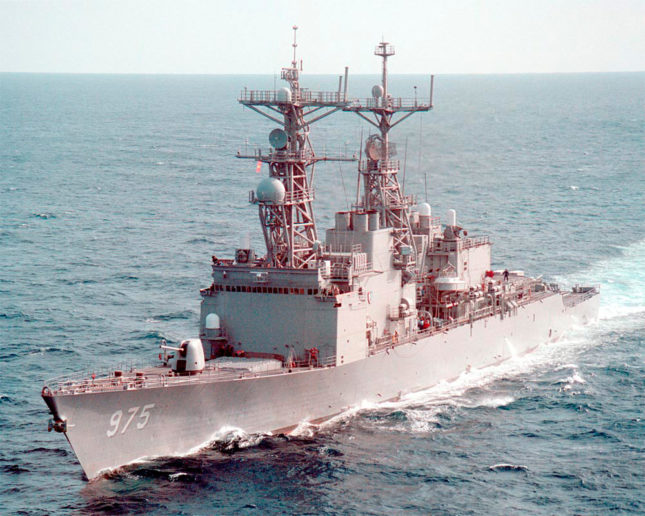 Berger’s ship had been deployed to the Middle East. “We were in Port Bahrain (an island nation in the Middle East) and were having liberty, enjoying ourselves,” she remembers. “I was on watch on the ship, carrying a shotgun.” She walked into the mess deck where the crew was watching TV, just as the second airplane had hit the Twin Towers in the 9/11 terrorist attacks. Not knowing what had happened, she asked the crew if they were watching the movie, “Independence Day.” Someone answered, “No. This is real life.”

The ship was immediately placed on alert. “We pulled away from the dock and went out to sea,” Berger remembers. It was chaos, as about half of the crew were still on shore. They had to be rounded up to return to the ship, but some were left behind. Luckily, she says, there were two helicopters on the ship that brought the crew back onboard to safety.

Berger explained that during an alert, all Navy ships are required to pull out to sea, just to be ready. All communication was locked down and the crew couldn’t e-mail their families. A mass e-mail notified their loved ones that they were safe. “My family was really worried,” Berger remembers. 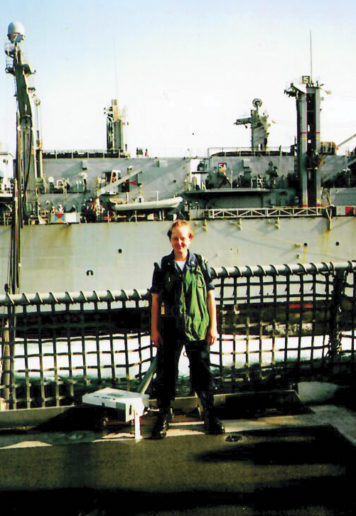 Before 9/11, the USS O’Brien had been at port in the United Arab Emirates where Berger said there were huge billboards everywhere with images of Osama Bin Laden, the man behind the 9/11 terrorist attacks. The USS O’Brien’s mission had been to monitor other ships that were smuggling oil. “Our mission changed,” Berger said.

As a response to the attacks, the USS O’Brien and USS John Paul Jones were sent to Afghanistan, where they shot 13 guided missiles (Tomahawks) targeting weapon camps and warehouses used by Al Qaeda. “We were worried,” she remembers. “We were concerned about surface retaliation.” They were also concerned that more attacks were planned.

In November 2002, the USS O’Brien returned to Japan. “All of our liberty port calls were cancelled,” Berger says. “No more pleasure cruises – the threat was too big.”

“What I miss most about military life is the sense of family. My current work helps bring back a little of that camaraderie.”

A Navy Sonar Technician assists in safe navigation and aids in search, rescue and attack operations. They operate and repair sonar equipment. Berger loved her job. “Our job was to search for and monitor submarines,” she says. “It was interesting. Everything under the water reads on the sonar screen as a frequency. It picks up everything – even a school of dolphins – we could hear them talking underwater.” 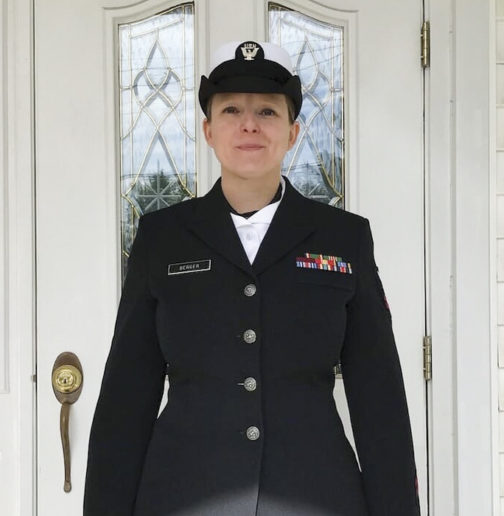 Berger met her first husband, James Cabatingan, on the USS O’Brien. In August 2002, the couple welcomed their first son on the naval base in Japan. The couple was transferred back to San Diego, but this time, they were on different ships. The USS O’Brien was very old and had been decommissioned. Berger’s new ship, the USS Preble DDG 88, had different capabilities. “I preferred the old ship. I had to paint The O’Brien all the time – it was held together by paint,” she laughs. Her husband was on shore duty and she was stationed on the ship, which remained in San Diego.

As a Woman in the Military

After their second son was born, Berger had to return to the ship when he was just six weeks old. She was required to stay onboard from Monday-Friday. “There are challenges for women in the military,” Berger shares. “I had to leave my young child and there was no extended leave available. Breastfeeding him was not an option.”

It was at this time Berger had a big decision to make. “I decided to get out of the Navy,” she remembers, “and I wasn’t happy about it. I not only enjoyed my service, I loved it. I traveled the world and met a lot of different people. And, I had medical and dental insurance.” Unfortunately for the military couple, their marriage did not survive. “Being a military spouse is hard,” she says.

While there has been much coverage of sexual abuse in the military, Berger says she was never affected. “I never felt threatened or afraid of being around male shipmates. I never experienced that.” 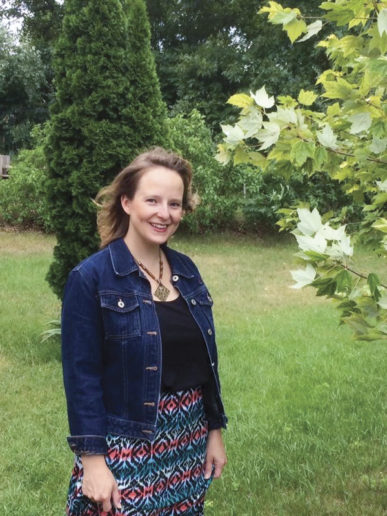 Berger remained in San Diego for a while, and obtained a child care license. In 2008, she moved back home to Michigan. “Coming home felt strange,” she remembers. “I had always told myself I was never, ever coming back to Michigan.” But it was good being with family again. She went back to school on the GI Bill and received two associate’s degrees: Early Childhood Development and Business Administration. For many years, she operated a child care center in Holly while raising her sons. She re-married and they added a daughter to the family.

These days, Berger works with other veterans. She is a trustee at the Veterans Resource Center and a member of the Holly VFW Post 2692, where she serves as the adjutant (secretary). She recently completed the organization’s first quarterly newsletter. She carries a flag in a combined VFW/American Legion Honor Guard in parades and for funerals at the Great Lakes National Cemetery. She also plays the bugle at Memorial Day ceremonies. “What I miss most about military life is the sense of family,” she shares. “My current work helps bring back a little of that camaraderie.”