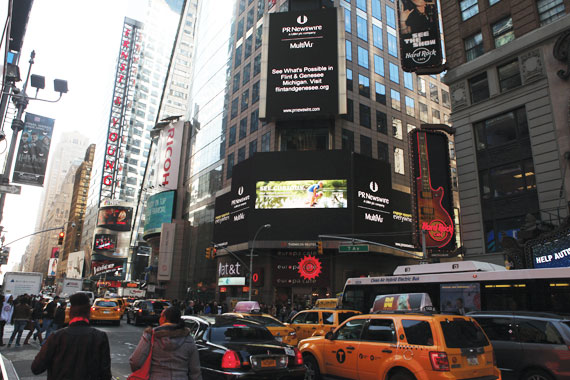 Beautiful lakes, magnificent greens, rich art, cultural events and higher education … Flint natives know that these assets are a few of the many hidden gems in the Flint/Genesee County area. The strengths and the beauty of the area are the focus of the new branding and marketing campaign created by the Flint & Genesee Chamber of Commerce. With the marketing slogan, “See what’s possible,” the campaign is expected to challenge the nation and the community to think about Flint and Genesee in a fresh new way, and to give a boost to tourism in the area.

The new campaign was announced at a press conference on March 27 at the Holiday Inn Gateway Center in Grand Blanc Township. In support of the campaign’s goal, which is to increase awareness of the vibrancy of the region, a new website, flintandgenesee.org was also designed and launched.

“The destination branding will help to bridge the gap between our strengths and potential visitors’ perceptions,” said Tim Herman, CEO of the Flint & Genesee Chamber of Commerce. “There are millions of Americans who have limited or no knowledge of our rich culture and arts, our innovative spirit, our heritage, our emerging status as a college town, the rebirth of downtown Flint, our county parks and other assets that make Flint and Genesee a great place. The new branding campaign gives us a great platform to introduce ourselves on our terms.”

John Matonich, president of ROWE Professional Services and chairman of the Chamber’s board, said the campaign has endless potential. “Everyone is tired of the negative headlines,” he said, adding that the campaign’s goal is to promote the strengths and assets that make Genesee County a great place to live.

Joe Serra, president of Serra Automotive and board chair elect, thanked the Flint & Genesee Chamber for reintroducing Flint to the world. “This campaign has teeth,” he said. He appealed to Flint businesses and residents alike, stating, “Businesses need to come together, along with the community as a whole, and support this campaign.”

“Our image has not always been what we want it to be,” said Clarence Pierce, CEO of Hamilton Community Health Network. “We can make this a better community… and help this new brand come alive.”

The campaign was produced in partnership with branding consultant, Mark Lantz, Fenton Firm, Shift Reset, which provided original music and radio production, and Jamie and Carrie Shaltz, who handled photography, cinematography and videography for the project.

Flint City Mayor, Dayne Walling, declared that the new branding is a positive step forward. “The branding initiative does a great job of reflecting the important link between the city of Flint and Genesee County, he said. “There’s no doubt that together, we are very powerful.”