In a summer filled with tent-pole fantasy/sci-fi/horror franchise films and sequels, and kiddie-minded animated comedies, there isn’t a lot of … well, humanity.

Not to complain; for this month, I fully intend to check out the Independence Day reboot (Independence Day: Resurgence), The Conjuring 2 (I’m a Patrick Wilson fan) and Free State of Jones (ditto for Matthew McConaughey). And maybe the caper comedy, Central Intelligence (because I interviewed Dwayne Johnson back when he was The Rock, and he was an engaging guy).

The rest … I dunno. How many films coming to Genesee County in June are really actor-driven? Well, I can think of one, and it showcases the talents of one of the favorites among patrons of our Friends of Modern Art series at the FIA. 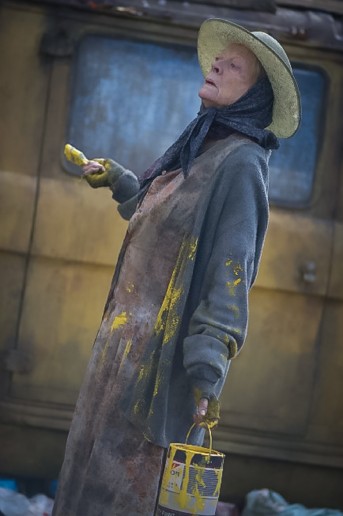 The Lady in the Van stars the estimable Maggie Smith, who is terrific as the titular character – an eccentric, transient oldster who drives her vehicle into the driveway of a befuddled London playwright, and stays there indefinitely. If this sounds as if it couldn’t happen, be forewarned that it did: The real-life playwright was Alan Bennett (The History Boys, The Madness of King George), who decided to write a movie about the whole thing.

Jim Broadbent – like Smith an Oscar winner – co-stars, albeit not as the playwright; but this is Dame Maggie’s movie. It’s another late-in-life triumph for an actress whose career experienced a recent renaissance on TV’s Downton Abbey, which demonstrated that you don’t have to be close to Smith’s age (81) to appreciate her work.

The FIA is playing The Lady in the Van on June 17-19 to cap its 2015-16 film season and precede a summer hiatus. (The season began last September with another Maggie Smith picture, My Old Lady). Two other movies are on the museum schedule for June, and both are from France.

The first, My Golden Days (coming June 2, 3 and 5), concerns a diplomat, played by the ubiquitous French actor Mathieu Amalric, who recalls his adolescence and childhood. An unbalanced mother, a memorable journey to the then-USSR, and a friend who betrayed him are part of the recounting – and so is the love of his life.

Marguerite (June 10-12) is the other June selection. Inspired by a true story, it has been described by the show-business publication Variety as a “splendid satire.” It’s about a 1920s French socialite who was determined to establish a career as an opera singer – even with her not-so-golden voice.