The crowd quieted as Najee Greenlee took up his clarinet and began to play the first notes of the Carmen Fantasy by P. Sarasate. With seemingly little effort, the music began to dance through the auditorium. The audience was rapt as Greenlee, with intricate variations, trills and movement, transported them to another world. And after the last note faded, the crowd erupted in applause as Greenlee humbly bowed, then left the stage. The performance marked the end of his education at the prestigious Interlochen Center for the Arts and the start of something new. “I’m heading to the University of Michigan in Ann Arbor to continue my education looking to excel in clarinet performance,” he explains. “I would love to play for my profession or maybe teach and help someone else get the opportunities that I have had. My immediate goal is to get even better.”

His musical journey started in fifth grade at Randels Elementary school in Flint. “I was playing basketball at the time and I just wasn’t into it, but my mom wanted me to continue doing something,” he remembers. “At school, we were issued recorders to play during music class. I did well on my test and the band director got in contact with my mom. She urged me toward music and I picked it up.” 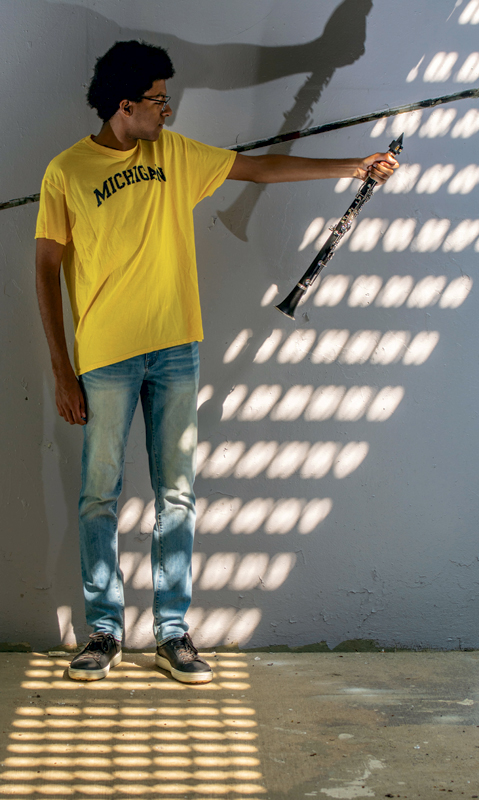 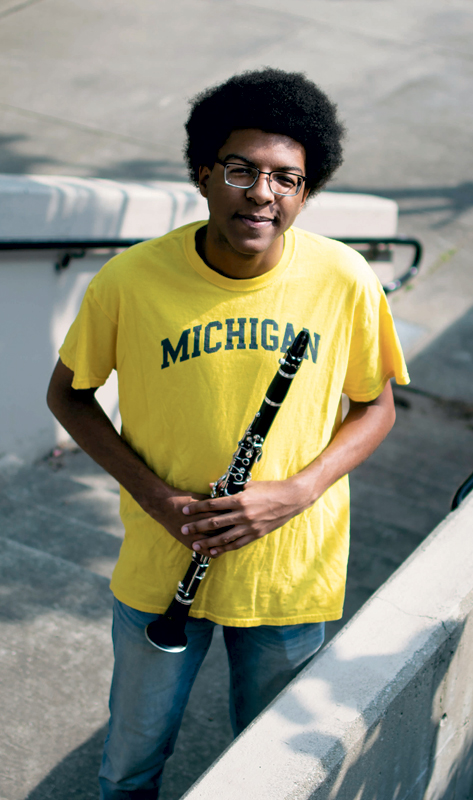 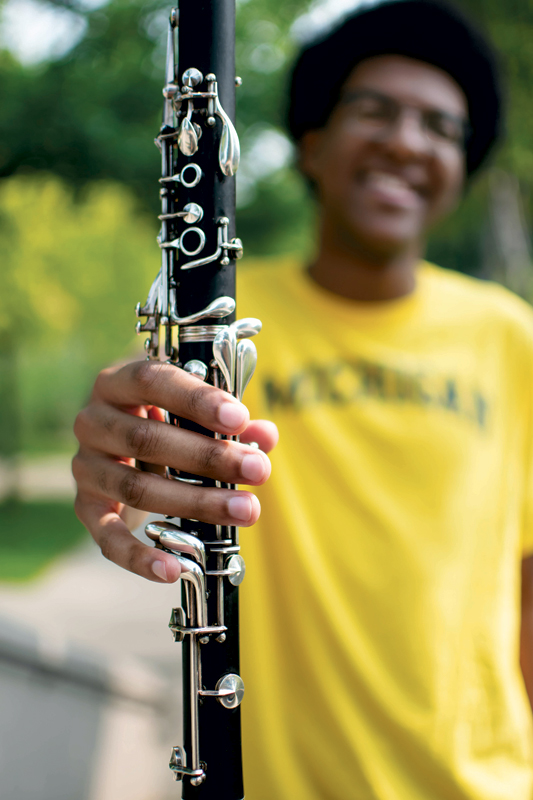 At first, Greenlee had no idea what instrument he wanted to play. He tried a bevy of different instruments and never made a decision. “The director picked the clarinet for me and I accepted it without a second thought,” he explains. At ten years old, music and the clarinet weren’t a big passion for him. He enjoyed playing fun tunes like video game music and playing with the band, but never had a thought of pursuing it beyond high school until he attended a few semesters at Scarlett Middle School in Ann Arbor. “At that time, it wasn’t really a high priority for me,” he recalls. “At Scarlett, I played the classics and discovered how great it could be. When I got back to Flint, I wanted to experience that again.” He started thinking about music as a career and listened to classical music continually. He enrolled at the Flint School of Performing Arts (FSPA) where his talent was unveiled. At 15 years old, he uncovered his next step. “I saw videos of kids my age playing at Interlochen and I was blown away,” he says. “I applied to the school and had to audition. I remember waiting four hours to play for them.” Greenlee was accepted to attend camp at Interlochen in 2019. 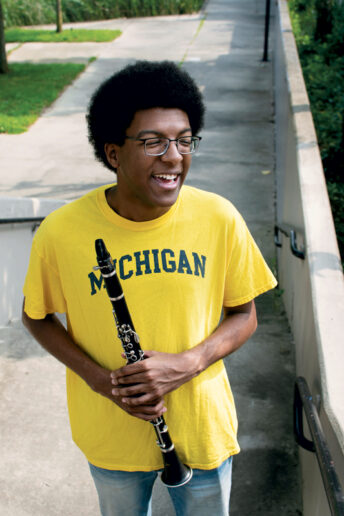 “When you find out what you love to do, explore it. When you play, explore everything that is possible and listen to as much as you can.”

While at camp, Greenlee impressed the teachers and directors with his attitude, leadership and ability. “One of the directors pulled me aside and told me he appreciated how I did the work and how I was a great role model. Then, he told me that he nominated me for the Maddy Summer Artist Award,” says Greenlee. He was presented with the award at the end of camp. Winning the award was an honor but most importantly for Greenlee, it came with a sizable scholarship to attend the school. “It really helped,” he says. Greenlee attended his junior and senior years of high school at Interlochen.

As graduation approached, Greenlee was working on applying to schools and summer programs when his teacher, Bryan Conger, offered a suggestion. “He said I should really think about applying for National Public Radio’s Jack Kent Cooke Young Artist award. I filled out the application and sent in a selection of my music,” Greenlee explains. “After a few months, I was selected to play on the Juneteenth special of ‘From the Top’ and told that I had won the award!” (NPR presents the Jack Kent Cooke Young Artist award to approximately 20 exceptional pre-collegiate musicians ages 8-18. Each winner gets to appear on NPR’s “From the Top’’ program and can receive up to $10,000 toward high-level classical music study.) ?

For the performance, Greenlee gathered a number of his friends to play “Clarinet Quintet in F-Sharp Minor, Op. 10, Mvmt 2” by Samuel Coleridge-Taylor. He was joined by Aiden Krieger (violin), Valerie Xu-Friedman (violin), Emma Boyd (viola) and Gabriel Hennebury (cello). “It was so much fun to record music with my friends and an honor to be featured on ‘From the Top’,” adds Greenlee. “It was a complete surprise and playing on the Juneteenth episode was a great way to honor the contributions of African-American composers.” With the prize money, Greenlee purchased a much-needed new clarinet. “Really, you need two – a B-flat and an ‘A’ clarinet,” he laughs. “For a long time, I had to rent an ‘A’ clarinet whenever I needed it and was never sure what I was going to get. Now, I can make sure it is maintained as it should be.” 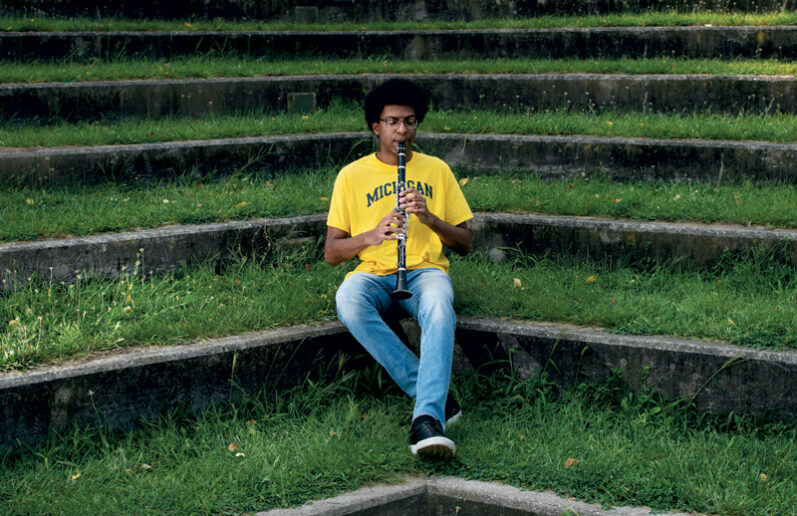 Even after all his success and awards, Greenlee is still not entirely sure how he got here. “I’ve had a lot of help,” he says, “and I found a path through music. I love how different it can be – the different ways of playing, interpretations. It can be approached in countless ways and I love the freedom I have to express each piece my own way.”

For now, Greenlee is preparing to attend his first semester of college in Ann Arbor. He is not entirely sure where it will lead, but he is ready for the journey and will keep his eyes open for any possibility. He advises young musicians to do the same. “When you find out what you love to do, explore it.

When you play, explore everything that is possible and listen to as much as you can. Music is everywhere and with music, any future is possible.”