It’s a brand-new year and, as always, the My City Magazine staff is busy preparing new and exciting ideas for stories in 2018. But, let’s take a look back at some of last year’s reader favorites. 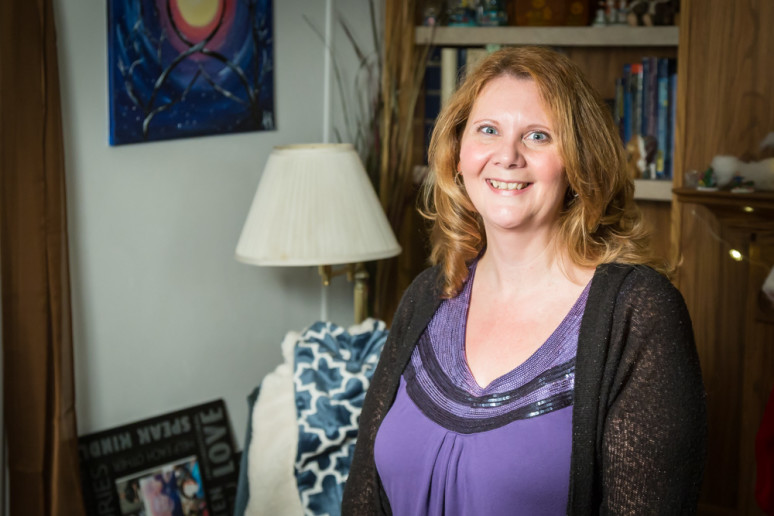 Restoring Hope, One Life at a Time

Director Amy Roleau shares the mission of Restoration Place – a faith-based, 501c3 nonprofit organization that specializes in the care of victims of abuse, neglect and sexual exploitation. The organization’s goal is to provide a long-term aftercare home for girls ages 11 to 17 who survive human trafficking.

Kathleen Gazall, Rodney Lontine, and Winston & Mary Stoody share the advantages of living, working and playing in Downtown Flint. “Everything I need is here,” says Gazall. “Why cook, when I can get a gourmet meal right around the corner?” Lontine shares. The Stoodys love their home in the cultural area. “The price was right and we fell in love with the place.” 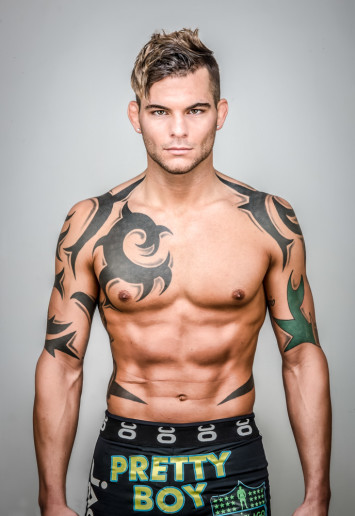 Dubbed “Pretty Boy,” this Mixed Martial Arts star is a Flint native and former Kearsley High School and Michigan State wrestler. “My goals are to be signed by a world-class promotional organization and hopefully, make millions one day,” Lamson says. “I’d love to be able to give back to Flint and inspire other people with my story of success.”

As president of Skypoint Ventures and CEO of the Hagerman Foundation, Jocelyn’s passion is being able to improve the image and quality of life in Flint and helping aspiring entrepreneurs. She shares, “The fact that our initiatives are having a positive impact on people and communities is truly what drives me.” 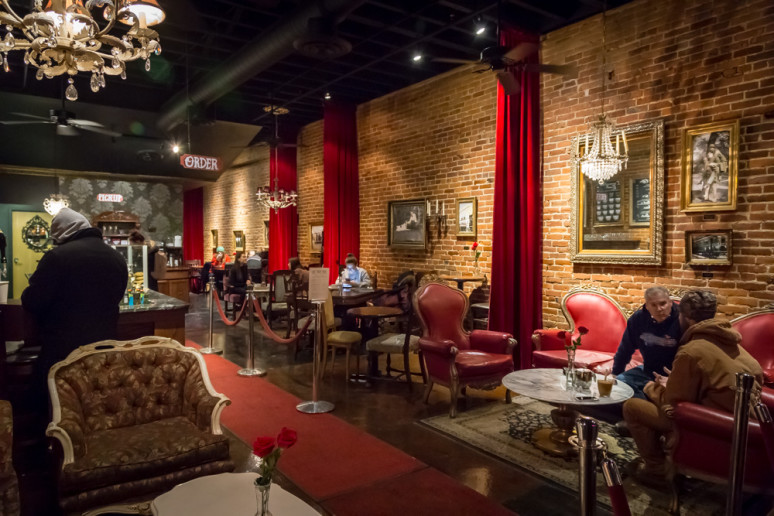 A Downtown Flint coffee shop with a Roaring 20s, “Great Gatsby” theme and cozy atmosphere is a great place to start a lively conversation and enjoy a steaming cup of high-quality coffee on a cold day. Owner Josh Spencer says, “I wanted to offer an alcohol-free getaway for people of all ages.”

Jerry Taliaferro’s collection of photos displays the essence of black women in one black and white image intended to capture each woman’s physical and spiritual beauty. “Some people’s definition of a beautiful woman was a little more constrained,” Taliaferro says. “Women of a New Tribe pushes against that. Beauty can take many forms.” 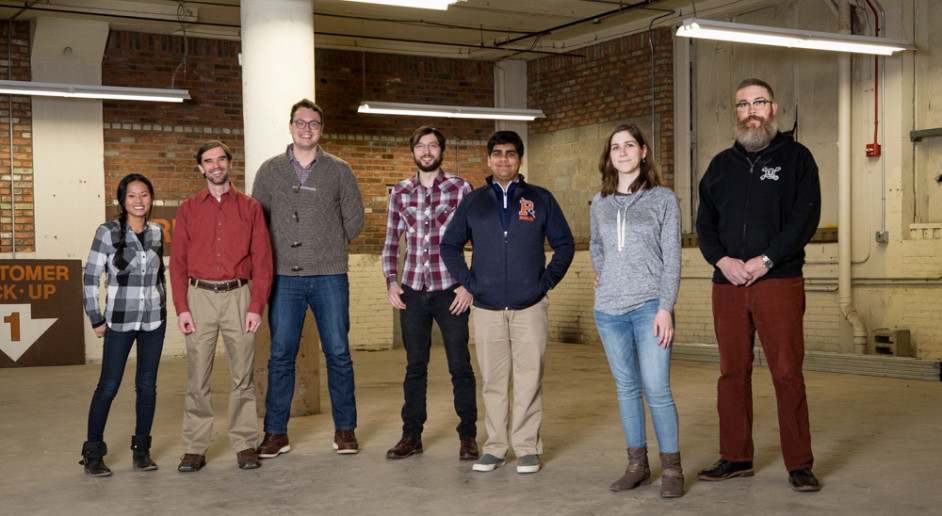 MCM toured Red Ink’s latest venture, a community maker space for creators, entrepreneurs and innovators. “We’ve been running Flint Local 432 for over 30 years, providing a safe space for young people to experience live music and the performing arts. Factory Two is a perfect complementary program, a place where the whole community can build, create and innovate,” says Joel Rash, Director of Red Ink. 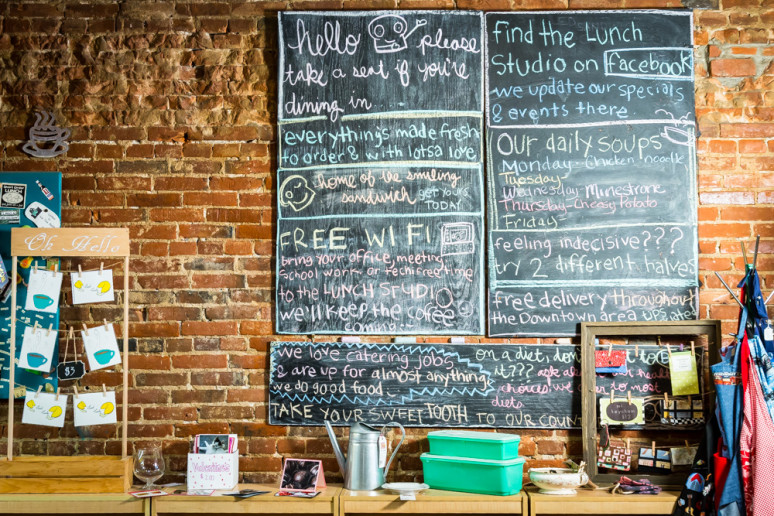 Homemade food and lots of healthy choices is what you will find at this popular Downtown eatery. Owner Tracey Whelpley, a Flint native, has been serving wholesome and delicious lunches to Greater Flint residents for 15 years. “I just want people to feel at home when they come in here,” she says.

MCM readers shared memories of working at AC Spark Plug, which has been referred to as one of the “most iconic auto parts names in history.” Former worker, Art Reyes, shared his memory. “I miss the people I worked with and had the honor to represent. I also miss seeing the clock tower every morning.”

A must read for the bride to be! My City shared the latest trends in bridal hairstyles, flowers, gowns, catering and more. Three local couples shared stories of their recent weddings that were rich in culture and tradition. 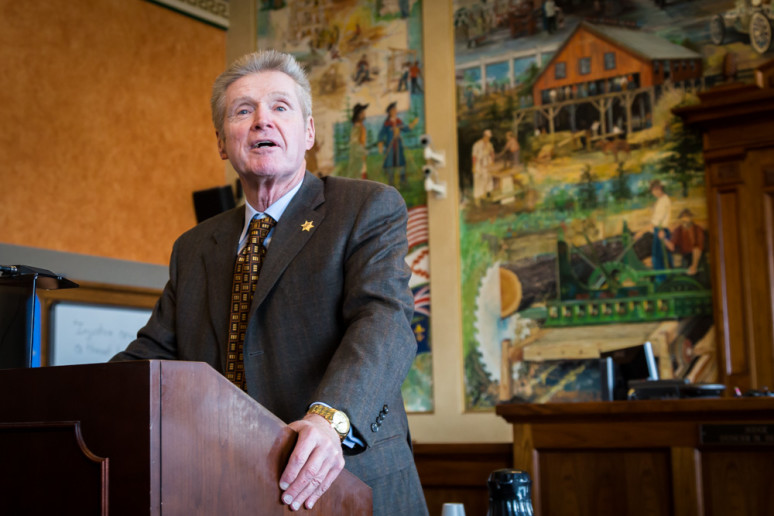 The Sheriff took us through a typical day at the Genesee County Sheriff’s Department, which begins with telephone calls as early as 5am. Pickell oversees 257 deputies and is often still working as late as 7pm. “I’m the only law enforcement person hired by the people. I’m the peoples’ sheriff,” he says.

My Eats: Crust – A Baking Company

Freshly-baked bread, pastries and coffee brewing greet you the moment you walk through the door. Mike Green, Executive Baker, described Crust’s expansion project. “The bakery operates 22 hours a day, and baking continues around the clock,” he says. 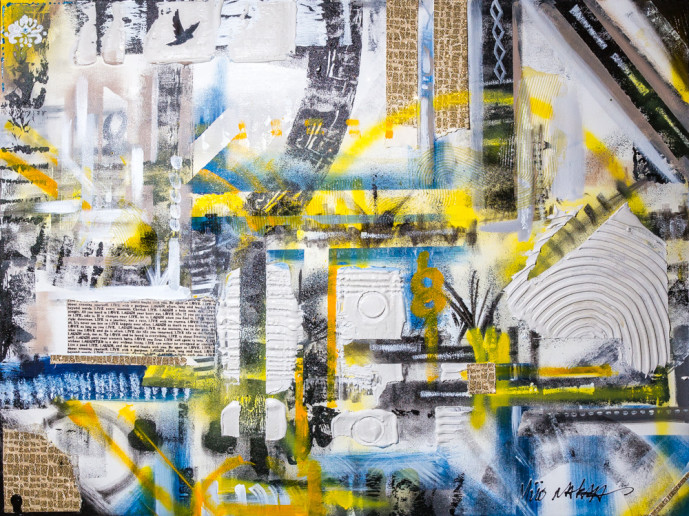 President and CEO of the Greater Flint Arts Council, Greg has his own eclectic and unique collection and it is his belief that anyone can begin collecting pieces to which they feel personally and viscerally connected. “My collection is diverse; paintings, original prints, sculpture, photography, pottery, glass, wood and mixed media,” he says.”

My Community: Paint Our Town Blue for Child Abuse Awareness

Last April, the Club had a grand centennial celebration at Sloan Museum. “It was an amazing evening!” exclaims Peggy Nolde, President of the group that is dedicated to the Kiwanis International mission: changing the world – one child and one community at a time. 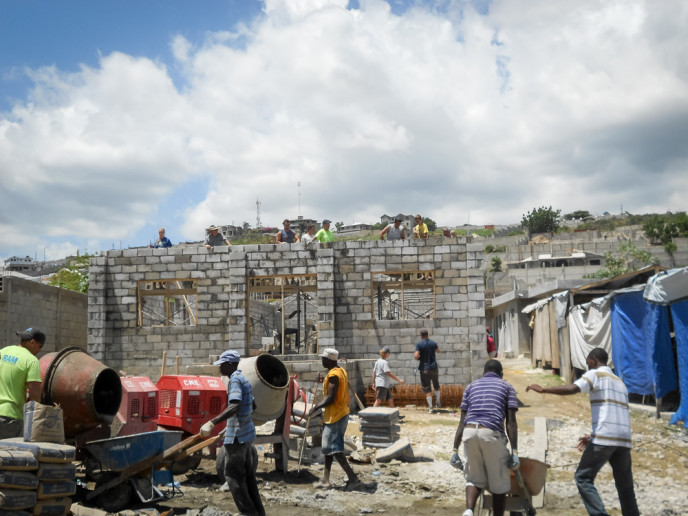 The Swansons: A Family on a Mission

Chris Swanson of Fenton and his son, Riley, shared their experiences on mission trips to Haiti, the Dominican Republic, Grenada and Chile. “Everyone should take a mission trip to realize how blessed we are in this country,” Chris says.

Receiving 23,000 votes in nearly 200 categories, My City Magazine announced the winners of the annual City’s Choice campaign, which drew participants from all around the country.

The Girls Court: One Piece of the Puzzle

“The primary purpose of the Girls Court is to reduce the risk of girls age 14-17 from being trafficked. Human trafficking is a big issue everywhere, and Genesee County has its own unique set of problems,” states Genesee County Judge David Newblatt who presides over this specialized prevention docket under the Family Division’s jurisdiction.

Up to the Challenge: Local Standout Headed to West Point

Standout Powers Catholic High School student, Olivia Bennett, was National Honor Society President and earned many varsity letters in cross country, track, soccer and basketball. “It’s difficult for women to get into West Point,” she says, “and I feel an obligation to represent women in the military. It has become my passion.”

YWCA collaborated with law enforcement, the prosecutor’s office and the medical community to get a clinic up and running to elevate the level of services available to sexual assault survivors. The clinic is called SAFE Center and offers free examinations 24 hours a day.

Bill Harris has been broadcasting news in Genesee County since 1977. Now anchoring the 10pm news with WSMH FOX66, Bill sat down with MCM to chat about his many years in the news business. What he appreciates most are the viewers who have placed their trust in him over the years, “It means so much,” he says. “I owe my career to them.”

Chris Wilson brings his football knowledge, positive message and burning desire to give back to the community in which he was raised to his position as coach of the unified football team of Northwestern and Southwestern high schools. “I love how the players are coming together under our theme of one team, one dream,” says Wilson. “They understand how crucial it is to work as one unit.”

My Haps: The PARTY, Flint Institute of Arts

Scott B. Karlene, MD, and Kevin J. Gaffney, MD Dermatology and the FIA presented The PARTY: An ARTrageous Affair. Held annually on the first Saturday in June, this fundraiser is known as the most exclusive event of the year.

The Mott Foundation reached a major grant-making milestone last summer, as they continue their dedication to the Flint area that began in 1926. “Since the day my great-grandfather created our Foundation, we’ve been committed to Flint,” says Ridgway White, President. “It seems especially fitting that the grant that put us over the $1 billion mark locally supports something he cared about so deeply – community education.”

Tom has produced and hosted The Tom Sumner Program for ten years. What began on the Kettering University Campus as the show “Off the Kuf,” has been broadcasting live every weekday from 9am-noon from its studio through Flint Podcasting Company for over a year.

MCM highlights the success of Grand Blanc Varsity Football Coach, Clint Alexander. “I’ve always believed that it’s important to create an environment where players worry about doing what is best for their teammates more than what’s best for themselves,” Alexander says. 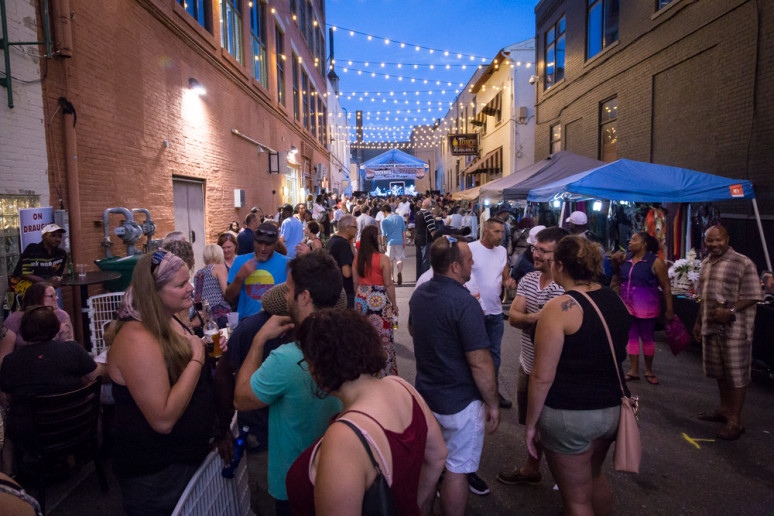 2002 Kettering University grad, Dr. Aaron Kyle, is now a Senior Lecturer with the Department of Biomedical Engineering at Columbia University. “The most exciting aspect of my career is getting to work with wonderful young people and seeing their transition from students to engineers.”

The beloved Flint Italian restaurant is best known for its thin crust pizza. “From people in tuxedos to people wearing overalls – they all come in for their Luigi’s fix,” says co-owner, Kirk Laue.

My Haps: Back to the Bricks, Downtown Flint

One of Flint’s premier events was, once again, a huge success. The two-week happening brought thousands of vehicles and spectators to the area for tune-up parties, rolling cruises, Bricks Flicks at US 23 Drive-In, and much more.

The latest project at the Berston Field House is a resource created to counteract the high rate of illiteracy. It will serve community members of all ages, offering support as well as programming aimed toward adults during the day, while the younger community members are at school. 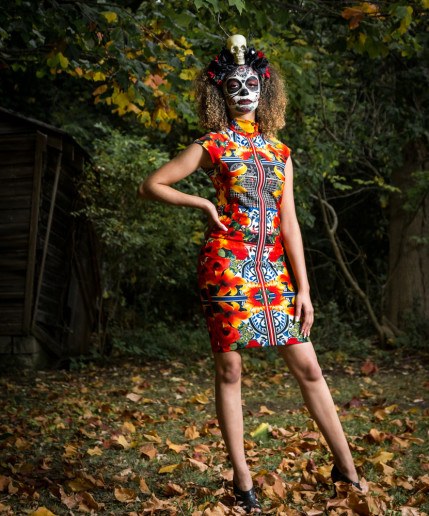 Kayla Wilburn shared tips for do-it-yourself Halloween fashion. “Let me show you how you can ‘shop your closet’ and create a special look no one will forget!” she says.

My Haps: The Crim Festival of Road Races 2017, Downtown Flint

Held annually on the fourth Saturday in August, the two-day event draws thousands of participants and spectators to the bricks in Downtown Flint.

My Music: Who is John Fett?

Holly native, Bruce Horn, talks about his years singing and playing guitar with the John Fett Quartet, a band that has been in existence for 15 years. Doug Wilson plays bass, Aaron Reinhard, drums and vocals; and Paul Owsinki is lead guitarist for the band that was named after Jon Fett, a former bass player.

This Grand Blanc High School student is not just an athlete, she was also 2017 homecoming queen. She has been a fixture on Grand Blanc’s eighth-grade, freshman, JV and varsity football teams for the past four years. “It was an incredible moment for so many reasons,” she said of her crowning last fall.

My Haps: A Night at the Museum, Sloan Museum

“Enchanted Forest” was the theme of this year’s event – an evening of entertainment and raising funds to support youth and educational programs at Sloan Museum and Longway Planetarium.

Coach Steve Schmidt reflected on the remarkable men’s basketball program he has built at Mott Community College as his 27th season began. 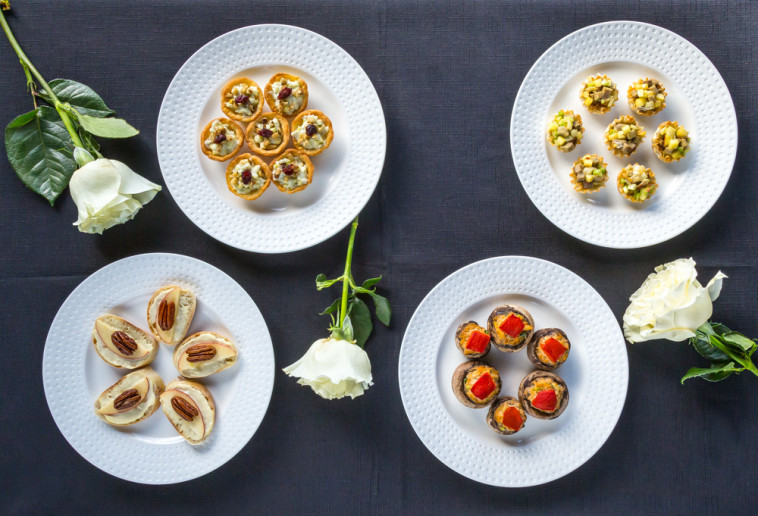 My Eats: Fandangles’ – So Appetizing!

My Haps: A Night at the Savoy, Berston Field House

Attendees of last October’s Friends of Berston frundraiser gala wore attire reminiscent of the 1920s, when the historic Berston Field House was built. Proceeds from this event provide operational and programming funds for the facility.