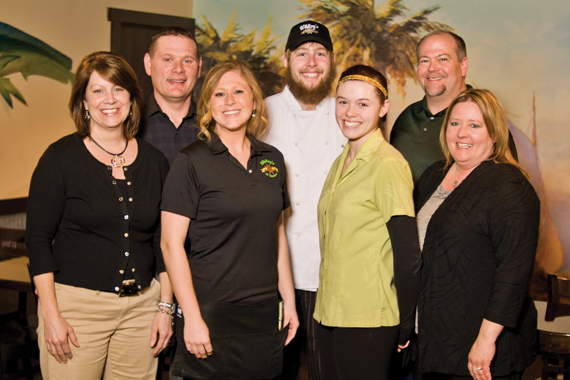 Shhh… don’t tell anyone, but rumor has it that Whitey’s of Davison is Genesee County’s go-to place for Fish & Chips! It’s really no secret that the well-known eatery has been serving fish dinners for over half a century. Opened in 1955 by Whitey and Molly Hilgendorf, Whitey’s is now in the hands of third generation members of the Hilgendorf family.

“It started out as an all-you-can-eat, family-style fish and chicken dinner place,” explained Mike Hilgendorf, who currently co-owns the business with his cousin, Scott Hilgendorf. Eventually, Whitey and Molly decided to concentrate on serving fish. “We kept the fish and let Frankenmuth have the chicken,” laughed Mike. And it’s the delicious Fish & Chips dinner that Whitey’s continues to be famous for today. The recipe is a family secret concocted by Whitey and his business partner. “Let’s just say we marinate it for a couple of days, batter it and put it in the deep fryer,” shared Mike. The plates are piled with fresh-caught, lightly battered North Atlantic cod that keeps customers coming back for more. Of course, it’s not a real fish dinner unless it’s accompanied by coleslaw, made at Whitey’s with hand-cut cabbage and carrots in a light, sweet and tangy dressing.

But the crowds come to Whitey’s for more than just fantastic fish. Diners rave about the salad bar, which offers an impressive variety of crisp and fresh vegetables, house-made dressings, pasta salads, soups and much more. “We make everything from scratch,” said Scott, “And all of the recipes are traditional; we haven’t changed much throughout the years.” The house-made soups include Bean, Lobster Bisque and New England-style Fisherman’s Chowder. Another huge favorite is Whitey’s Cheeseburger Soup, which is only served on Thursdays.

What’s the key to Whitey’s longevity? Mike believes the restaurant has endured because it is family-owned and serves top-quality food. Chef Dennis Bowers has prepared the dishes at Whitey’s for 25 years, assisted by Mike and Scott. Scott’s wife, Dana, is a member of the management team. Pam Davis, another longtime staff member, makes all of the salads for the salad bar. As for quality ingredients, Mike said the search is never over. “We’re always looking for the best fish we can get,” he said. In order to serve the highest quality product possible, the owners have traveled to inspect fish processing plants as far away as Nova Scotia and Seattle, WA. Mike speculates that Whitey’s has probably served four to five million pounds of fish in the restaurant’s long history, and that number is due to the robust 3,300 pounds of fish served every Friday during the Lenten season. “Davison has a large Catholic community, so this is our favorite time of year,” added Scott.

While the Fish & Chips are famous, the seafood menu offers other favorites, including Snow Crab Legs, Shrimp, Bluegill, Crab Cakes, Michigan Whitefish and Walleye, to name a few. “People love our crab legs!” exclaimed Mike, adding that they are served in a special pot that keeps them toasty warm and delicious. Oysters are served in the half-shell or deep fried. Oysters Rockefeller, another beloved classic, is oysters in the half-shell first covered with a rich sauce and breadcrumbs, and then baked. A popular appetizer is Shrimp on Deck – shrimp sautéed in a rich garlic cream sauce with a touch of sherry, topped with five cheeses and baked.

Land-lovers are not left hungry; they can enjoy a variety of hand-cut, charbroiled USDA Choice steaks seasoned with a special blend of herbs and spices. Gator Bites are also a big hit: marinated alligator tail meat that is battered, deep fried and served with a special dipping sauce. Hash browns are a popular side dish, as are the homemade potato chips served with the variety of sandwiches. All entrées are also served with a fresh-baked loaf of Italian-seasoned bread, tempting you to spoil your appetite with its delicious aroma and zesty flavor.

At Whitey’s, the recently renovated bar is an inviting spot for people to enjoy cocktails in a cozy and casual atmosphere, where bartender Vera Stephens has served patrons for 12 years. “A ton of people come in just to see Vera,” says Scott. The best thing about Whitey’s of Davison is the loyal customers, some who have frequented the eatery since the time Whitey and Molly owned it, and some who drive from all over the state to get their seafood fix. “We love seeing the same faces!” Mike exclaimed. “We enjoy making people happy by feeding them good food.”

See more photos HERE, or purchase photos from this story by going HERE and selecting the “Whitey’s” category.

TO MAKE
Brown the ground beef with onions, sprinkle with 1/2 tsp salt while browning. Don’t drain fat; add water, beef base and potatoes, simmer until potatoes are cooked. Add milk, bring to a gentle boil and reduce heat to simmer. Add roux while constantly stirring until soup thickens. Turn off heat, add cheese, black pepper to taste and parsley and enjoy! Makes 1.5 gallons.