Gentle, resonant, sharp, clear, reverberating, splashing, cascading – these are some words that describe the melodious sound of a harp. Ever since Brittany DeYoung – harp instructor at Flint Institute of Music – was a little girl, she knew it was the instrument she wanted to play. While growing up in Utah, her whole family was musically inclined; her mother played the flute and her three sisters played the piano, flute and cello. 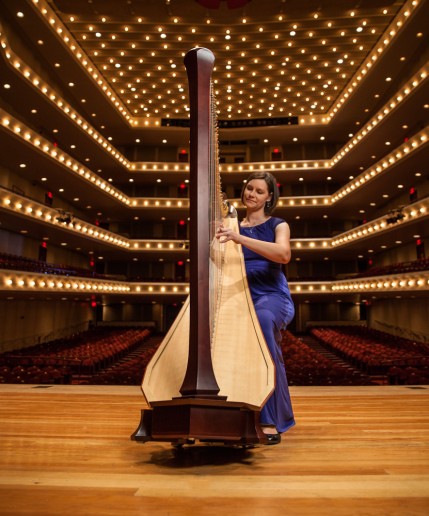 Brittany’s first experience watching a harpist play was a performance by a community choir group in Utah. She was able to meet the musician and talk to her. “I was star struck by the instrument!” Brittany exclaims. “I told my mom I wanted to play it and she said, ‘no.’” The harp is a very expensive instrument, but Brittany finally convinced her mother that it was what she really wanted to do. “My family was how incredibly supportive,” Brittany explains. “They drove me to and from hundreds of lessons and rehearsals for nine years, and were at every performance. Without their support and encouragement I would not be where I am today.”

“I love watching my students develop their talent and a love for the instrument.”
Brittany DeYoung

Brittany remembers performing The Firebird by Russian composer, Igor Stravinsky, with the National High School Orchestra at a competition in Ohio. “I played it horribly,” she laughs, “It was the most stressful thing, but it was the first time I realized I could really do this, if I was actually prepared.” Brittany went on to college for her undergraduate studies at the University of Arizona. While there, she played with the university harp ensemble, HarpFusion, and they performed in China, Korea and Spain. “There were 15 harpists, and it is the only touring harp ensemble in the world!” Brittany says. There is no music written for the harpists in the group, so they arranged their own music. For the performance, the harpists all played in unison, creating a beautiful sound. 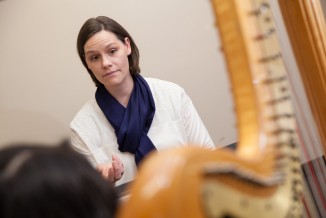 After completing her studies in Arizona, Brittany then attended the University of Michigan-Ann Arbor where she obtained a Master’s Degree in Harp Performance. She chose to stay in the Ann Arbor area because of its rich musical environment, and now has a fulfilling life as a teacher, solo harpist, and busy mom of a son and a daughter with her husband, Robert. “The great thing is that music is my hobby, as well as my career,” says Brittany. She practices for upcoming performances every day while her nine-month-old daughter is napping.

Along with teaching at FIM on Thursdays, Brittany is the principal harpist for Lansing Symphony Orchestra, and performs with the Ann Arbor Symphony Orchestra and the Flint Symphony Orchestra. Her most recent FSO performance was for Holiday Pops at The Whiting. “It’s always so much fun,” she shares. Brittany gives harp lessons in her private home studio, and plays elegant music for weddings and other special occasions. She is looking forward to an upcoming performance this month with the Saginaw Bay Symphony Orchestra on March 19. Her favorite piece of music to play is a harp solo in Marcel Grandjany’s “Rhapsodie.” “It’s rich and lush – big chords – just a gorgeous piece of music.”

What does Brittany enjoy most – playing the harp or teaching it? “The harp is such a rewarding instrument to play, but I really love to teach,” she says. “I love watching my students develop their talent and a love for the instrument.” She especially enjoys teaching at FIM. “It is a great place to teach. They have harps there to rent at such at affordable rate.” With funds from a generous donor, FIM purchased a carbon fiber lever harp for about $7,000. Concert quality pedal harps can range from $15,000 to $100,000.

Her students exhibit their talent during an FIM event, the Seeing Stars Scholarship Showcase, which helps fund the Flint School of Performing Arts tuition assistance program. One of Brittany’s students went on to study harp performance at Michigan State University. “It was the best feeling, knowing that I had helped her,” Brittany says. She believes that the harp is no more difficult to learn than any other instrument. “It takes a short time to learn the basics and a lifetime to master it. I’m still working at that.”