As Steve Schmidt reflects on the remarkable men’s basketball program he has built at Mott Community College, evidence of that success adorns the wall behind him.

From the trophies, including four national championships sitting just above his head, to encased jerseys worn by some of the Bears’ finest players lining the top of the wall, the boisterous Schmidt has plenty to show for his labor as his 27th season begins. 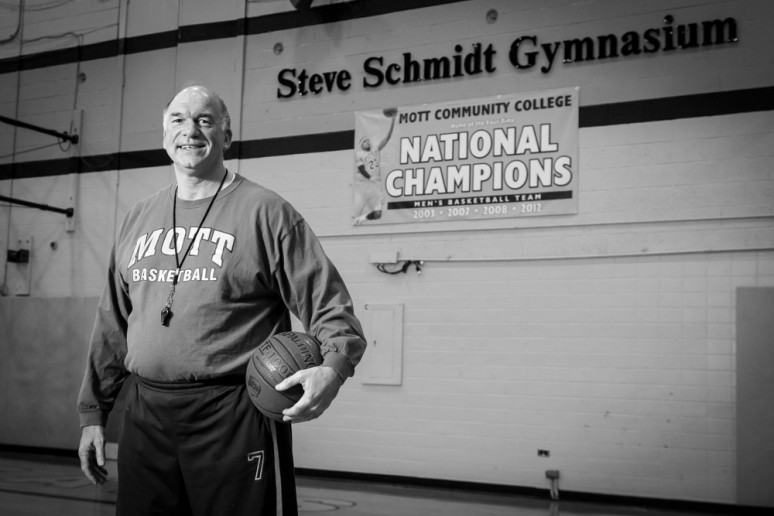 “Sometimes, it’s hard to acknowledge that it’s been 27 years, or half my life,” says the 55-year-old while sitting just a few yards from the gymnasium that was named for him in 2009. “I learned a long time ago that coaching is a lifestyle and I’ve never looked at it as a job, because there are no set hours. At this level, a coach does more than just coach – I work until the job is done. Fortunately, I like to work and I’m very driven.”

In 1991, Schmidt took over a program that was in disarray, and has since driven it to unprecedented heights. He boasts a 689-167 record through the first two games of this season. That includes eight National Junior College Athletic Association Division 2 Final Four appearances, seven national championship game berths and national championships in 2003, 2007, 2008 and 2012. 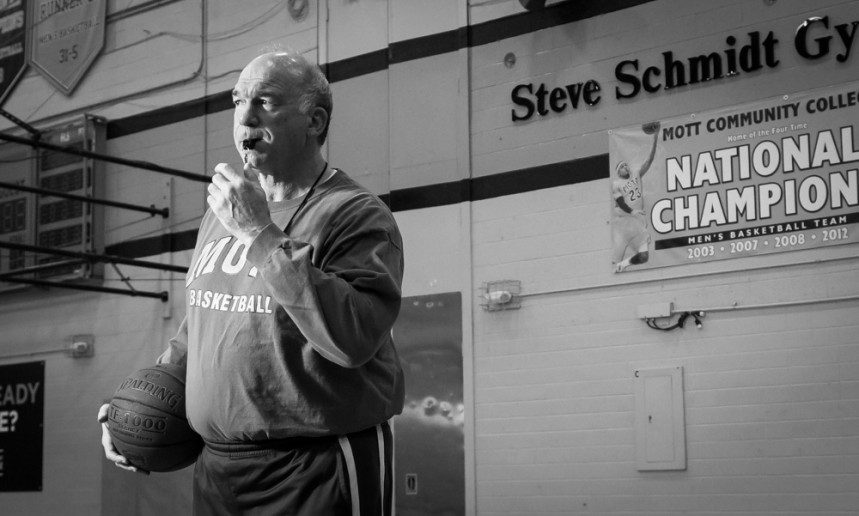 Along the way, the Bears have also captured 15 conference, ten state, and nine regional titles and produced four National Players of the Year and 22 All-Americans. Schmidt has been named NJCAA Coach of the Year four times.

His teams have posted an astonishing 29-6 record in the NJCAA National Tournament for an .828 winning percentage that is the best in history. “During my time at Mott, I’ve been able to reach, work with and learn from the players I’ve coached,” Schmidt says. “They have truly taught me a lot about how to coach them and I’ve loved the journey of building this program. There have been bumps in the road and I’ve been knocked down, but always came back stronger.”

However, what really makes Schmidt beam with pride is the 92 players who have moved on to four-year schools, including several who have played in the NCAA Tournament and at least 16 who have played professionally overseas. “In many cases, they were the first person in their family to earn some type of degree and hopefully set a new direction for future generations,” Schmidt says. “I coach to make an impact on the players.” 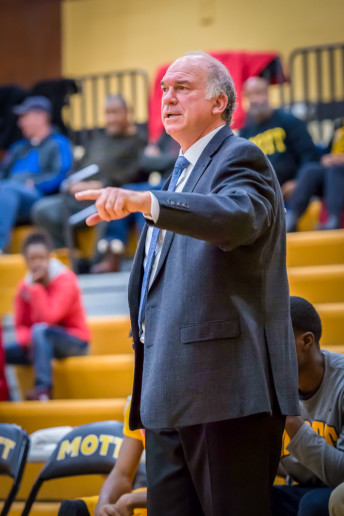 One of the latest players impacted by Schmidt’s influence is freshman guard, Jordan Roland, an honorable mention All-Stater, who helped Flint Beecher to three Class C state championships. “I came to Mott because I know coach Schmidt is going help me get the most out of my talent and help me get to the next level of college basketball,” says Roland, who started in the Bears’ season-opening loss to Jackson Community College, finishing with a team-high four assists in 19 minutes. Diandre Wilson, an All-American and the Bears’ leading scorer last season, is the latest to land at a four-year program signing with Division 1 New Jersey Institute of Technology in June.

“Coach Schmidt’s success has helped raise the profile of Mott Athletics by introducing the nation to Mott Basketball on a frequent basis over the last decade and a half,” he says. “He also does things the right way with a set of standards and an expectation of discipline that all students must abide by. This unbending standard is an ideal that NCAA programs have noticed, and is why they consistently recruit Coach Schmidt’s players.”

From the time he first picked up a basketball as a youngster in Lansing, Schmidt has always tried to do things the right way. He quickly developed a respect and reverence for the sport. In fact, Schmidt struggled to satisfy his appetite for hitting hardwood and playing hard. All the games, drills and practices forced the replacement of both his hips about a decade ago. “I could never get enough of playing and even in my mid-forties, I was competing in as many recreational league games as possible, but it took a toll and I started to have trouble even walking,” he says.

After averaging 20 points a game and being named All-State his senior season at Lansing Waverly High School, Schmidt took the same path to Division 1 basketball as many of his players. He first continued his career at West Valley Junior College in San Jose, CA, where he was named the team’s MVP, before landing at Central Michigan. After playing his final game there in the spring of 1985, he found a unique way to prolong his playing career, joining the Washington Generals, the hard-luck team the Harlem Globetrotters always frustrate and defeat during their shows.

Generals’ owner, Red Klotz, signed Schmidt after meeting with him during a Globetrotters appearance in Big Rapids. He spent the next three years, well, trotting around the globe doing his part to make the shows entertaining. For him, that meant, among other things, being ever mindful of the fact that Globetrotters’ legend “Sweet” Lou Dunbar might yank down his shorts as he was attempting a free throw. 

“The whole experience helped me relate to and work with people, and I helped entertain people in 27 countries,” Schmidt recalls. “It was really fun, but they sometimes disliked me because I was a very physical player. One game, I accidently ran into Lynette Woodard (the first female Globetrotter) and nearly knocked her out. People didn’t know if it was part of the show or whether they should laugh.” 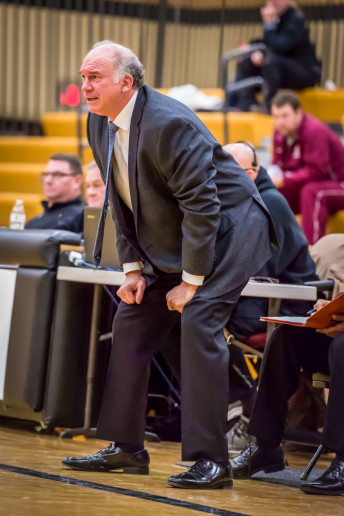 Following his time with the Generals, Schmidt dove right into coaching, simultaneously serving as a volunteer assistant at Lansing Community College and Waverly. “That was a time of two practices a day and four games a week and I was not making a dime,” he says. “I was having a lot of fun and realized I wanted to be a head coach. To do that, I needed to learn how to interview for jobs.”

The first job he interviewed for? Mott, in June of 1991. Intending to simply brush up on his interview skills, Schmidt was taken aback when offered the job – which he initially turned down. By late September, however, he was having second thoughts and heard the position had not been filled. Without calling first, he jumped into his car and drove back to Flint.

Upon entering Ballenger Fieldhouse, he was greeted by players Yusuf Harris and Mark Herron, who didn’t know who Schmidt was, but somehow recognized he was a basketball coach. “I went looking for the athletic director at a volleyball game and met the two young men,” Schmidt recalled. “They asked, ‘Will you please, please consider being our coach?’ That really pulled at my heart. I couldn’t say no to them.”

Schmidt was hired, but had no idea what he was thrusting himself into. “I didn’t know that the administration had been thinking of shutting down the entire program because of various issues with players, and that first year, we had Yusuf and Mark and a couple of other guys who could play,” Schmidt said. “The rest were just guys we recruited around campus. We couldn’t even do the most basic of drills at that first practice, but somehow through hard work and love of the game, we finished at .500 (14-14). Not bad, considering the AD told us we’d be lucky to win three games.”

By 1995, Mott had won its first state championship and Schmidt had added valuable assistant, Carl Jones, to the staff, who is still there despite having never before played organized basketball. “Carl is a very smart guy, who isn’t afraid to disagree with me,” says Schmidt, who is also assisted by Greg Hamlin and Bill Schnorenberg. “I got to know Carl because he was already working for Mott when I came there and eventually asked if he could help me. He’s taught himself the ins and outs of basketball with recruiting and evaluating. Players gravitate to him.” Added Jones: “It’s been a great ride for us in building the program. I’ve loved every minute and I think things really took off when we started signing quality players from Detroit, Chicago and other places.” 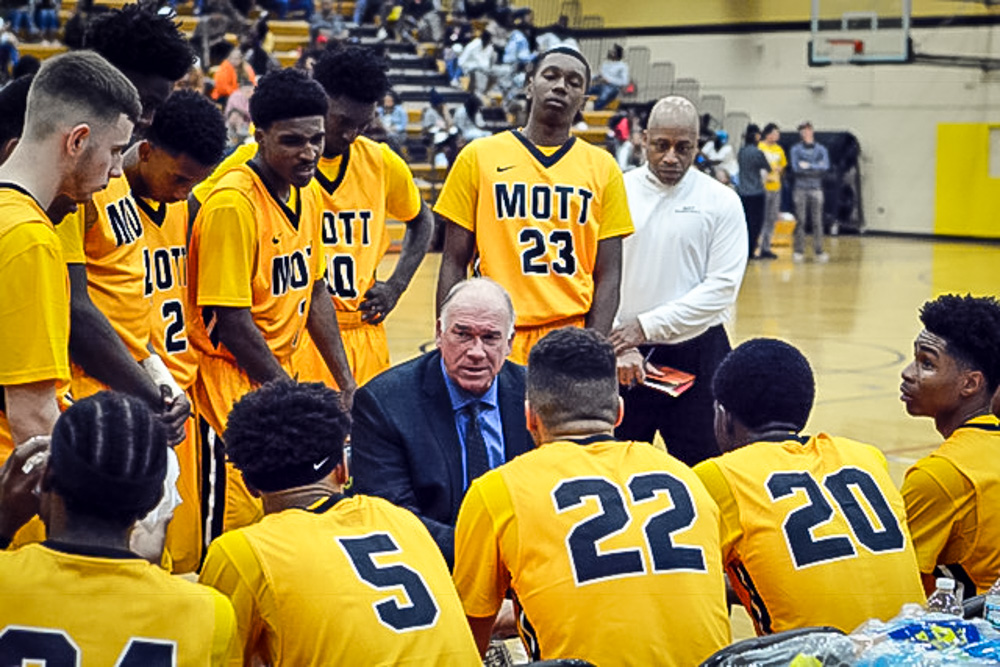 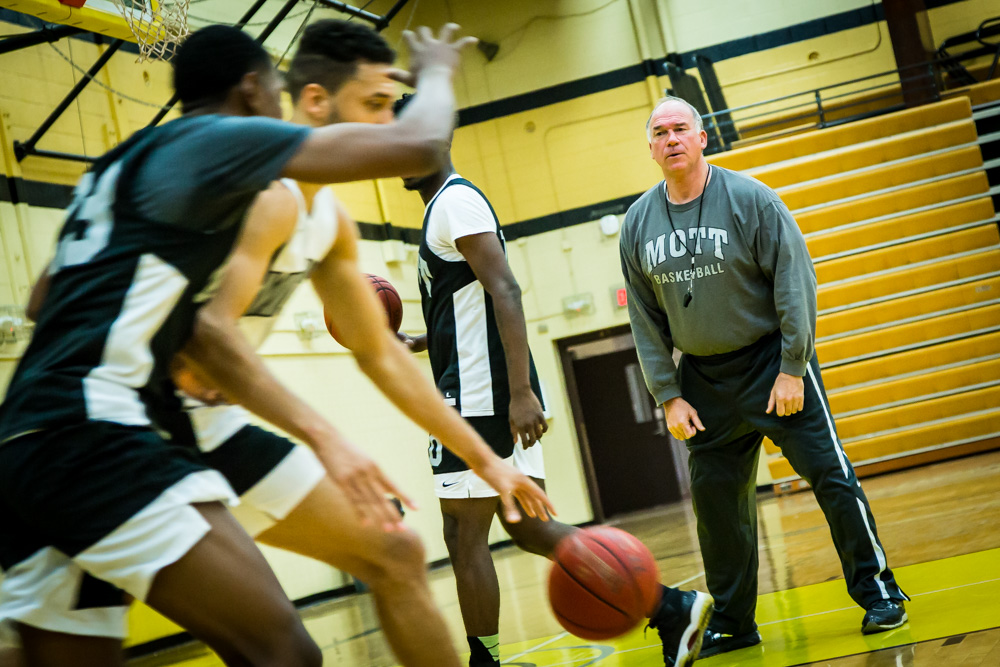 Indeed. In 2001, Mott reached the national title game for the first time with the help of Chicago area star, Rashi Johnson, who later played for Michigan State. Two years later, National Player of the Year, Jay Youngblood from Southfield, led the Bears to their first national championship. “That first championship was very special and Jay was not my first choice in recruiting, but thankfully, other people saw something in him that I didn’t,” Schmidt said. “Also, I’ll always remember two players from Detroit Redford (Demarcus Ishmeal and Darrell Evans), who helped me understand more about defense.”

“I really don’t have a time frame as far as continuing, because I still enjoy what I do and wake up every day looking forward to the challenges of coaching,” says Schmidt, whose team was 24-7 last year and ranked eighth in the first NJCAA Division 2 poll of this season.

“Sometimes, when I’m in a bad mood or not feeling well, I’ll come into our gym, sit and look up at that wall with my name on it and say, ‘Wow. That’s amazing’,” he says. “I want to continue to do everything I can to uphold that name out of gratitude for the people who went to bat to make putting my name on the gym possible.”

Those people probably can’t express enough gratitude to Schmidt for transforming Mott into a national power.
“I learned a long time ago that coaching is a lifestyle and I’ve never looked at it as a job …”