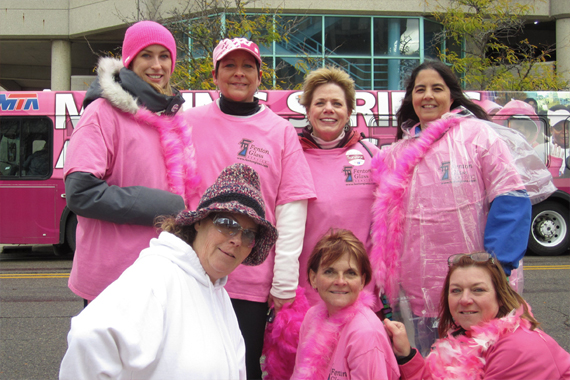 It’s $307,000 and still counting! That’s the amount raised at the Making Strides Against Breast Cancer Walk held in Downtown Flint on Saturday, October 29.

The Flat Lot was a sea of colorful umbrellas as breast cancer survivors gathered beside family members and friends for a brief ceremony before the walk. Approximately 3,600 walkers braved the elements to support a cause near and dear to their hearts. The event honors breast cancer survivors and helps raise awareness about what can be done to reduce breast cancer risk. Funds raised at the event goes to the American Cancer Society for use in research, dissemination of information and services, and increased access to mammograms for women who need them. Since 1993, more than nine million cancer charity walkers across the country have raised more than $528 million through Making Strides Against Breast Cancer events.

The team occupying the top spot on the fundraising list is Team Pink Night of Financial Plus Federal Credit Union, which raised $54,238.77 for the cause. Top participants are Mary Henderson, who raised $3,681, Julia Teahen, who raised $2,780 and Jana Petty, who raised $2,230. Pink was the color of the day, and team members wore hats of all shapes and sizes, feather boas, T-shirts and sweatshirts with moving slogans and the names of the loved ones they were honoring. The rain subsided and the sun peeked through the clouds as the teams began the three-mile walk, which meandered through Flint’s Cultural Center area to the Mott Community College campus and back Downtown. Onlookers cheered the walkers on. The end of the victory lap was cause for celebration and the walkers gathered together laughing and talking while others performed a victory dance.

Many participants shared comments about the event on Making Strides Flint’s Facebook page. “It was cold, but we braved it and won!” said Celia Smith.