It’s been a great year for Jessyca Mathews, English teacher at Carman-Ainsworth High School. She was recently named Michigan’s High School English Teacher of the Year by the Michigan Council of Teachers of English, which is just one of the accolades received by the vibrant, outgoing educator. She was also named Soccer Coach of Significance by the State of Michigan United Soccer Association.

In November, she was recognized as a Teacher of Significance at the National Council of Teachers of English (NCTE) Award convention in Houston, TX, along with 15 other teachers from around the country. At the conference, Mathews spoke on two topics: “Raising Student’s Voices Using Language and The Arts,” and “Social Justice in the Classroom.” Mathews enjoyed the experience. “I loved it!” she exclaims. “I love giving a new perspective to other teachers to take to their classrooms.” 

Born and raised in Flint, Mathews has taught English at Carman-Ainsworth for 19 years. She is also proud to be a former Carman-Ainsworth student, graduating in 1995. She received her Bachelor’s degree at the University of Michigan-Flint, and her Master’s degree at Marygrove College in Detroit. She also received certification from the Red Cedar Writing Project at Michigan State University. The cornerstone of the Red Cedar Writing Project is a four-week Summer Institute, during which teachers focus on becoming more effective writers, teachers of writing and teacher leaders. “You learn to be a teacher of other teachers,” Mathews shares. “It’s an awesome program.”

“My mom told me to stay humble and to always
honor the people who helped you along the way.”
Jessyca Mathews

Until she went to college, Mathews had never considered becoming a teacher. “My dad saw it in me when I was young,” she says, “and my mom prepared me for it.” So, why did she decide to follow that path? “I never had a teacher the same color as me until I went to college. I felt there was a need for that.”

Her love of reading drove her to teach English. “I have always been wrapped up in books,” she shares. “Mom took us to the library every week during the summer. We read every day. My mom is the reason I developed my love of reading. When I decided to be a teacher, English was a no-brainer. I love to read and I love to write.”

Coaching is another big part of Matthew’s life. She coaches the Carman-Ainsworth varsity soccer team and is also the club soccer coach for the women’s team at UM-Flint. She started playing soccer when she was just six years old. Her gym coach at the time, Paul Dresser, became a major role model for her. She remembers a time when she was playing kickball with some other students. A group of boys yelled at her to give up the ball. “I just nailed the ball at them!” she shares with a smile. Dresser asked her if she had ever played soccer. “That’s when it started,” she says. 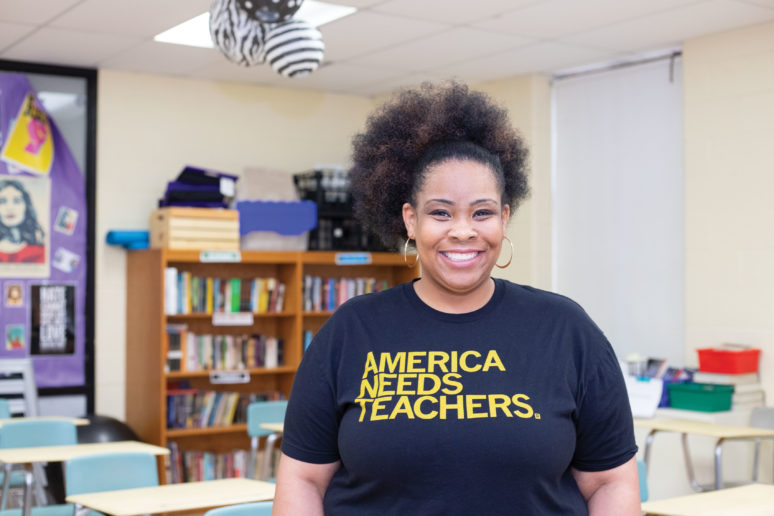 While playing high school soccer, her team won a District Championship. As her coach, Dresser not only taught Mathews how to play the game, but also how to coach. “He knew what I was supposed to do,” she admits. She began coaching after Dresser retired, and has coached for the last 20 years. She has coached at all levels of high school and what she loves now is coaching the UM-Flint women’s soccer team. “It’s a totally different experience,” she shares, adding that in her first season coaching the team, they moved from last place to fourth place. “I loved every moment of it!”

Mathews believes it was her destiny to teach at Carman-Ainsworth. When she was in kindergarten, her parents were driving down Linden Road one day and drove by a building (the newly-built Carman-Ainsworth High School). “What is that building?” her mother asked her dad. When he answered, she told him, “My kids will go to that school.”

Mathews not only attended the school but came back to the school as a dedicated and loving teacher. “Carman-Ainsworth will forever be my home. I owe the school everything. It made me an educator, coach activist, and a good person. I can’t imagine being anywhere else.”

The English teacher is loved by her students and what she particularly enjoys is when a former student comes to visit. “They let me know that what I do with kids matters. That is what gets me through. My job is to build kids up so they can make the world a better place.” 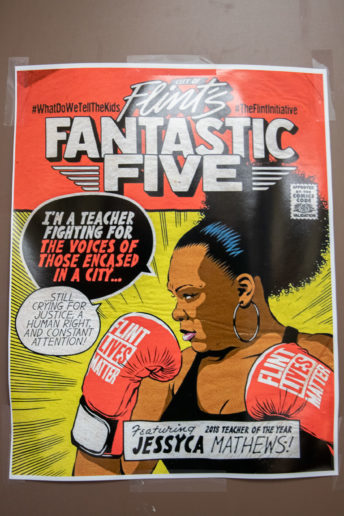 In her spare time, Mathews enjoys writing and has published two books, Simply: A Collection of Poetry, and 318: A Chubby Chick’s Tale of Weight Loss Surgery. “I write a lot,” she admits, “and I write for fun.” She also enjoys going to concerts and is a sports fan. “I’m a huge University of Michigan football fan!” she exclaims. “I love the Detroit Pistons and I’m a Green Bay Packers fan. I love watching football.” Her family is also very important to her. She spends a lot of time with her parents, siblings and her “three awesome nephews.”

Being named Michigan’s English Teacher of the Year means a lot to Mathews. “It’s a huge award!” she exclaims. “I just recently found out that I am the first African American to have received it. That was mind-blowing.” The award ceremony was held at MSU’s MCTE Conference, attended by approximately 700 people. “It’s kind of like the ‘Oscars’ for teachers,” she says. “It was a celebration of love.” She also says that teachers aren’t used to receiving accolades for their work. “It was very surreal for me to know that the work I put in is worth it.”

It has been a great year for the English teacher – one she will never forget. “It is also a year that has made me very humble,” Mathews says. “You realize that when you teach, you have a huge responsibility and you can’t do it alone. My mom told me to stay humble and to always honor the people who helped you along the way.” When accepting the English Teacher of the Year Award, she remembers thinking about her ancestors. “I thought about the people of my culture who, at one time, were not allowed to read or write. I thought about my ancestors fighting for the right to a quality education and for Civil Rights. I imagined that my ancestors were celebrating with me. This is what keeps me humble. It’s just one piece of the puzzle – to help someone who looks like me.”