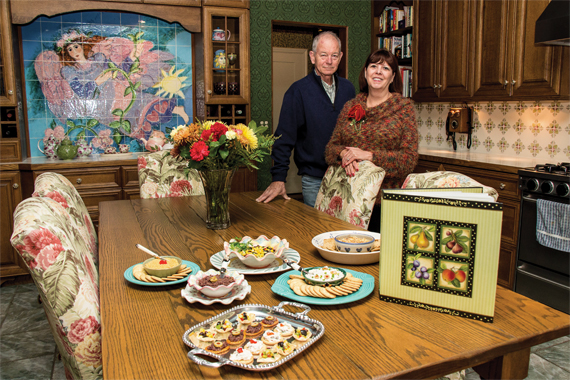 November is the month for foodies: we dream of turkey, cranberry sauce and pumpkin pie as the harvest season ends and the cold weather closes around us. Perhaps this season of phenomenal fare was the inspiration behind the Needlework Guild Association’s idea to gather the best recipes from individuals and restaurants in the community and compile a cookbook to auction for charity.

As President of the Flint Chapter of the Needlework Guild Association, Rosanne Heddy decided she wanted to do something special for the NGA’s annual auction in June, called the Barbara Landaal Terry Auction in honor of a longtime member. “Each member of the Needlework Guild brings two items to donate to the auction, as well as two guests,” Rosanne told My City Magazine. “Our theme is ‘make it, bake it, buy it or grow it.’” Originally, the Needlework Guild had planned to collect recipes for the cookbook from among their own the members, but then they had a brilliant idea: why not get the whole community on board?

I usually add more broth to this mixture so it isn’t dry. I have used dried herbs instead of fresh.

The community has indeed gotten on board with the project. Since September, Rosanne has collected over 90 tried and true (and yummy) recipes from local residents and restaurants. “Each time I receive a new recipe,” she says, “I’m certain it’s the best of all and I can’t wait to taste it!” Submissions include both classic and innovative recipes that have stood the test of time and taste. Delicious traditions such as Fandangles’ Butternut Bisque and the Bread & Butter Cucumber Salad from Frankenmuth’s Bavarian Inn Restaurant can be found alongside a recipe for Pumpkin Brownies and the Holly Hotel’s Chicken Strudel. As the recipes pour in, Rosanne has been trying them at home with her husband, Steve. “Steve and I have been eating very well since we decided to do this cookbook,” she chuckled. Rosanne takes pictures of the dishes, and adds them to the pages of the three-ring binder. “I was going to have it bound,” she recalls, “but I decided that this cookbook should be something that the owners can add to and scribble notes in and really make their own.” Only two copies of the cookbook will be available, so this item is sure to bring in a large donation for the Needlework Guild!

Mix cake ingredients minus the chopped walnuts; pour onto a wax paper-covered jelly roll pan (13×9); sprinkle with nuts and bake at 350° for 15–17 minutes. Remove from oven and turn upside down onto confectioners sugar-covered towel and roll up. Chill overnight in fridge.

Cream together the butter, vanilla, cream cheese and confectioners sugar. Unroll the cake and spread with filling, then roll back up, slice and ENJOY!

“The Burkes make this for us every year and it is delicious!” – Rosanne

The Needlework Guild was begun in England in 1882 to provide new clothing to orphans, and the movement spread to America in 1885. Members recognized that “old garments might pauperize, but new garments equalize,” and they have not wavered from this motto since. “Giving new clothes instead of hand-me-downs,” says Rosanne, “makes this statement: ‘You are worth something. You count. Someone cares about you.’” Through relationships established with local stores, committee “buyers” purchase new clothes at extreme discounts – “ for pennies on the dollar” Rosanne reports – to give to children in need. In 2012, the Flint branch of the Needlework Guild donated 15,585 items, the fourth-most of all 29 chapters nationwide. “Although we certainly are neither the largest organization nor the wealthiest community, we proved that the people of Genesee County are caring, compassionate and generous,” says Rosanne.

Rosanne will continue to collect recipes until January 15, 2014, so if you have a unique, delicious recipe, consider contributing to this great cause and email rmheddy@aol.com.

Are you interested in purchasing photos from this story? Go HERE and select the “Cookbook” category.