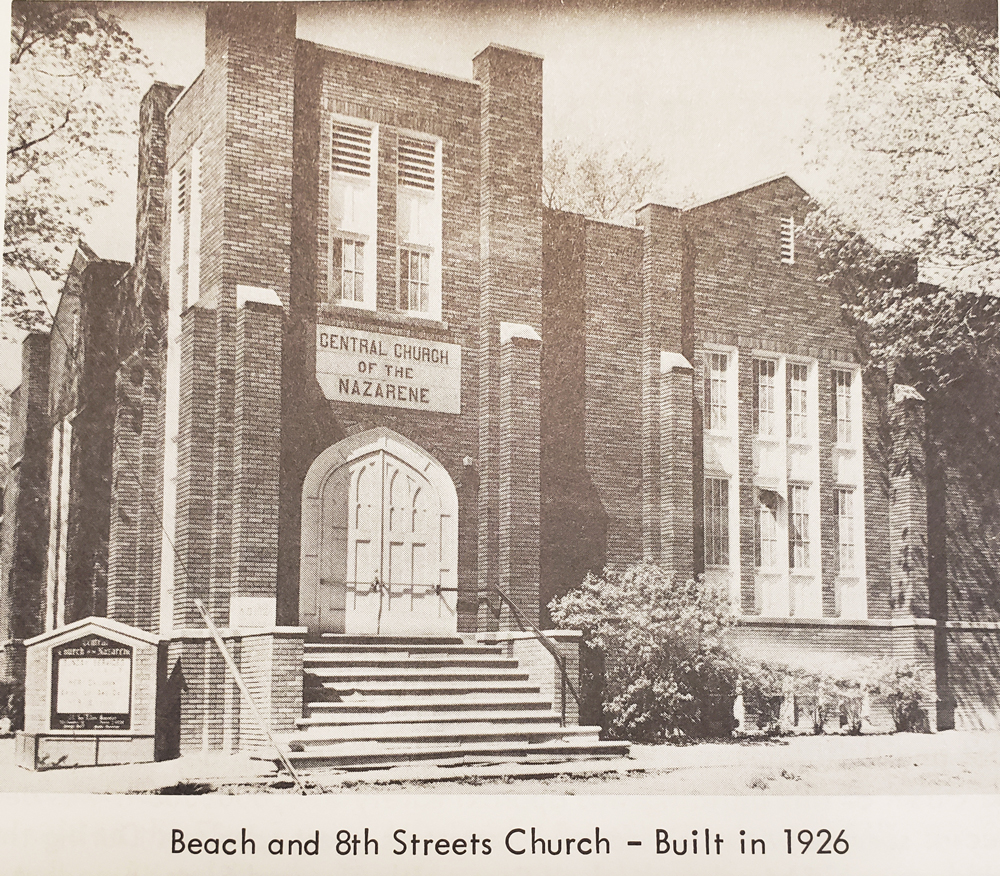 The Flint Central Church of the Nazarene has spent the year joyfully celebrating its 100th anniversary! And according to Chief Pastor Rob Prince, while celebrating the past is significant, the best days are ahead! “We are excited about our great past but we have an even better future,” says the pastor. While an official celebration of the milestone was postponed due to the pandemic, a three-day event filled with festivities is set to take place in May 2021.

An integral part of the city’s story, Central Church of the Nazarene got its start in a tent Downtown, across from the Genesee County Courthouse. The church has grown and changed locations over years, operating at its current site off Bristol Road since the early 60s. A massive fire burned the church to the ground in the 90s and a new church was built at the same location.

Thirteen pastors currently serve the large congregation. Sunday services are held at 9 and 11am, as well as live-streamed services viewed by 1,100-1,200 people. The large sanctuary and safety protocols allow robust attendance of services held inside the church. 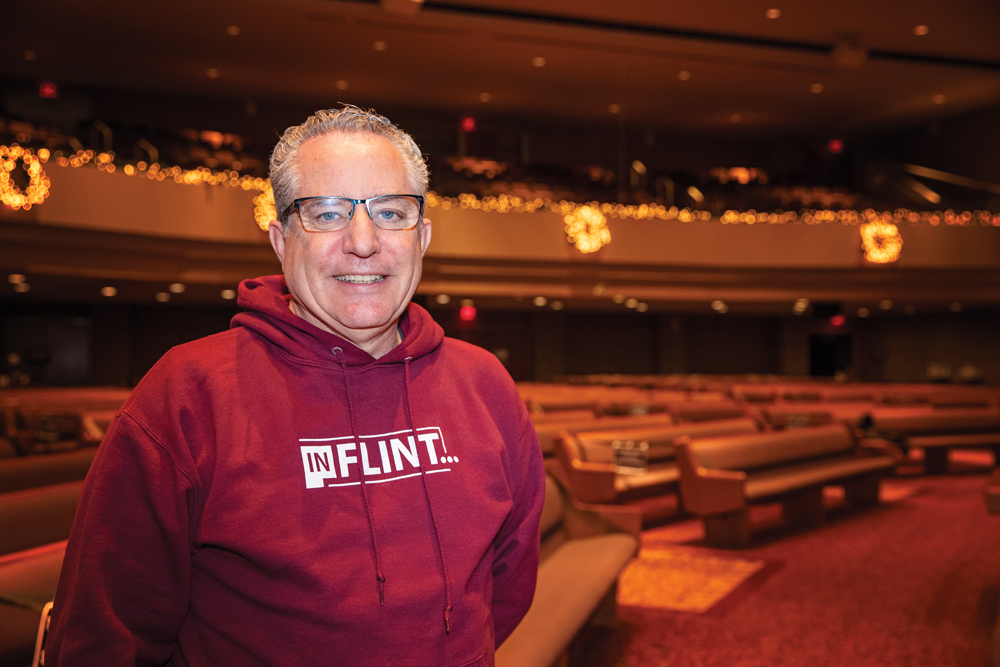 “Jesus LOVES Flint, is FOR Flint and is IN Flint.” 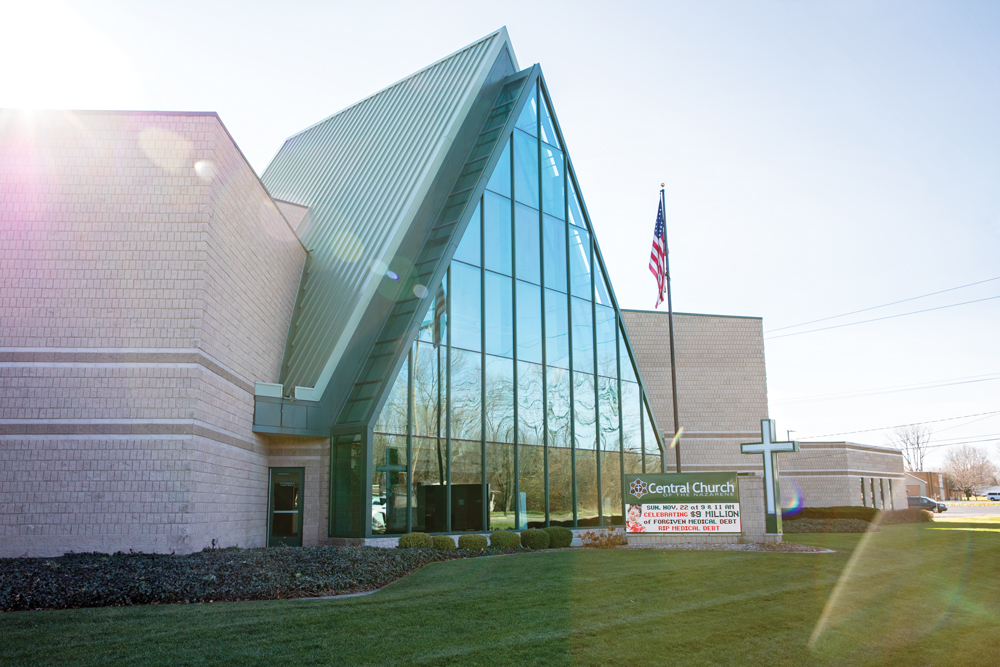 Most important to Prince are the partnerships the church has created within the community. “We like partnering with the community,” he says, “and we want to be the best neighbor.” Central Church has partnered with Meijer and Flint Township to provide free flu shots. Just recently, they partnered with a company that helped 984 Genesee County families eliminate medical debt. They have partnered with the Flint Boys & Girls Clubs and volunteer at a nearby elementary school, among many other partnerships.

“Our purpose is to be the hands and feet of Jesus in Flint and Genesee County,” says Pastor Rob. “We have been a part of Flint for 100 years and we were called to be in Flint. That is why many of the churchgoers wear T-shirts that simply say ‘In Flint’. Jesus LOVES Flint, is FOR Flint and is IN Flint.”

Flint Central Church of the Nazarene has been through a lot in its 100-year history – world war, economic depression and a global health crisis. And remembering the past is as important as looking to the future. Here are some historical highlights by the decade. 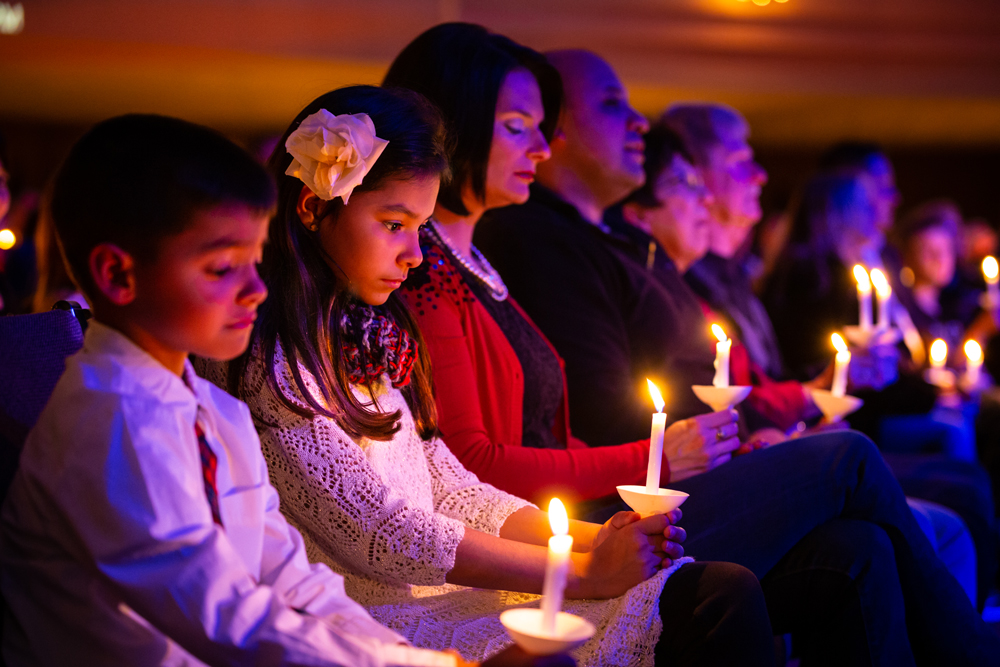 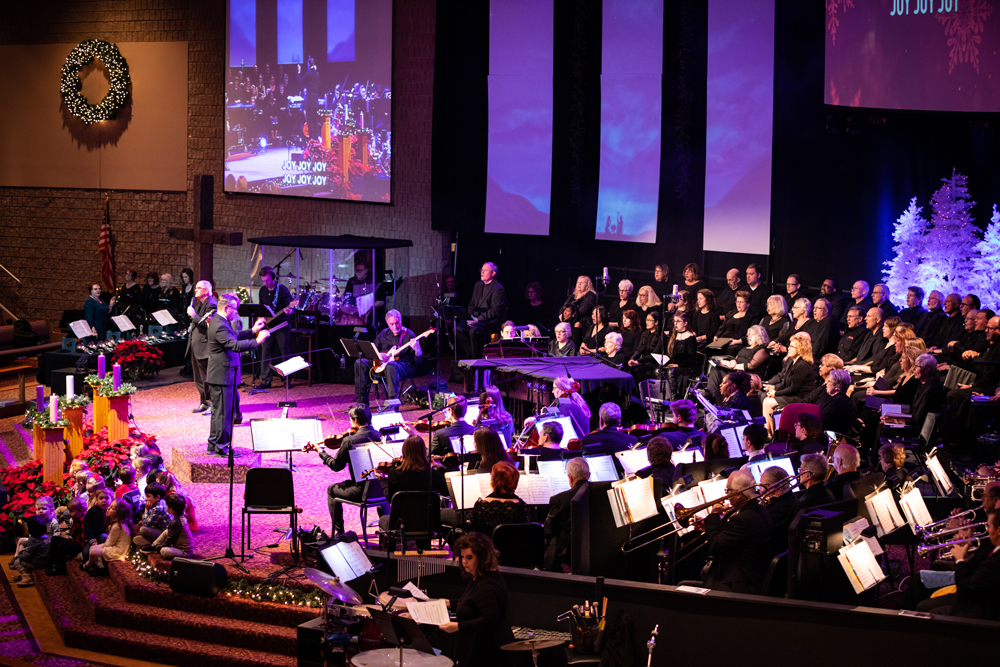 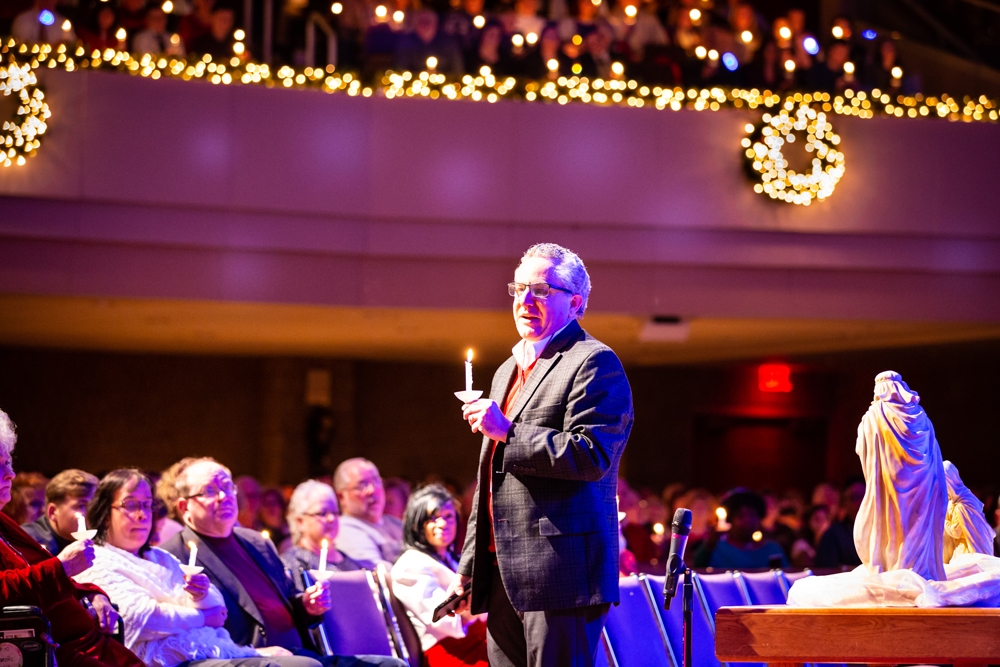 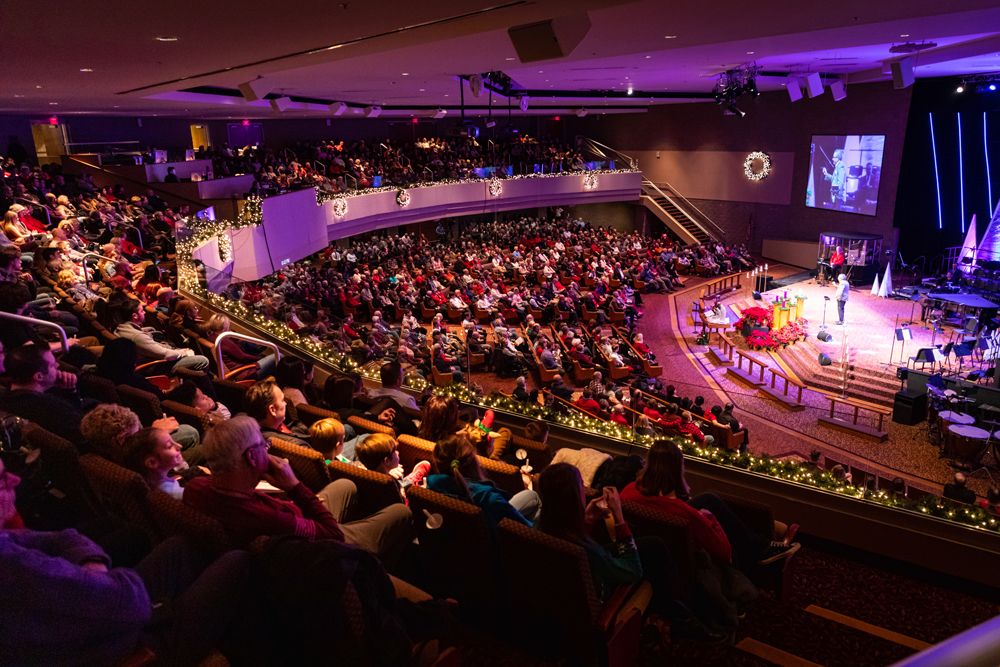 Flint Central started in a tent in Downtown Flint, across from the Genesee County Courthouse. The first Pastor was Rev. Marvin S. Cooper, 1920-21. Before cold weather set in, they needed a building. A lot was purchased on the corner of Beach and Eighth Streets for $12,000; the property housed a two-story framed building, which was immediately remodeled for church services.

The global financial crisis from 1920 to 1933 was devastating to the auto industry; factories in Flint reduced production to less than three weekly workdays with drastically reduced pay and unreliable working conditions. As financial institutions suffered, many church accounts and personal funds were frozen in closing banks. Yet, Flint Central remained faithful.

In December 1944, the church held a mortgage-burning celebration; the congregation contributed to the purchase and construction of the Chandler St. Parsonage.

Flint Central celebrated the Silver Anniversary of the building of the church in September 1951.

June 4, 1961 was an exciting day! Immediately following the Sunday morning worship service at Beach and Eighth, a 65-car police-escorted motorcade paraded to Flint Central’s future location at 1261 W. Bristol Rd. for the groundbreaking.

The entire month of October 1970 was designated to celebrate Flint Central’s 50th anniversary.

In 1975, plans were drawn up to expand the church facilities. An addition was built, doubling the sanctuary seating capacity to 900. Jack Friedman was the architect, and Chenoweth Construction Co. the builders. Along with the sanctuary expansion, the project also included new siding on the parsonage, new parking lots, and a communication system from the sanctuary to the nursery and foyer for security purposes.

In the 1980s, Flint’s economy was still dominated by the auto industry. Flint faced social and economic challenges during that time, but Flint Central’s motto remained: “It’s a great day in Flint, Michigan!”

In December 1983, Flint Central’s adult choir presented their first ever Christmas Pageant entitled “Noel – Jesus is Born.” This led to the annual tradition of Christmas pageants and productions, including “The Majesty of Christmas” presented in 1986 – a production that featured thousands of lights and participation by children, teens and adults to help the audience experience the wonder of Christmas.

On December 23, 1996, the $4 million church was destroyed by a fire that occurred only hours after about 850 parishioners had left the church following a Christmas candlelight musical. No cause was determined.

On June 29, 1997, a ceremony was held to break ground for the new building, and in July, construction began. It was an exciting, yet challenging time for the church.

An open house celebration was held April 16-17, 1999 to say “thank you” to the wonderful community that reached out to Flint Central in a time of need. The community was invited to tour the new building and enjoy refreshments.

On August 10, 2003, Flint Central was stunned to receive the news that their beloved pastor, Dr. Gavin Raath had passed away while leading a Work & Witness mission trip near Johannesburg, South Africa. Dr. Raath had gone ahead of the team to make arrangements, and suffered a heart attack on August 5. His wife Clara was given the news upon her arrival in their native land. Their two sons, David and Gavin Jr., joined him at his bedside. Dr. Raath suffered another heart attack, which was instantly fatal. His last words to a nurse were, “I’m going home in the morning.”

In November, 2013, Pastor Rob Prince became the 25th pastor at Flint Central. He served three churches in the district before being called to Lenexa, KS, where he was serving when Flint Central called him back to the area. Pastor Rob, along with his wife Karla, answered the call – he saw the need to be a light for the Flint community. Leading Flint Central in a modified Lord’s Prayer, that “God’s kingdom would come, and His will would be done ‘In Flint’ as it is in heaven.”

In the midst of planning Flint Central’s centennial celebration, the COVID-19 outbreak hit the United States. During this global disaster – a time with so much uncertainty, anxiety and fear – Pastor Rob and his incredible staff mobilized to make sure that the congregation and community were still taken care of. Pastor Rob remained a steady and cool-headed leader for his church and staff – a shining example of a compassionate and empathetic leader.