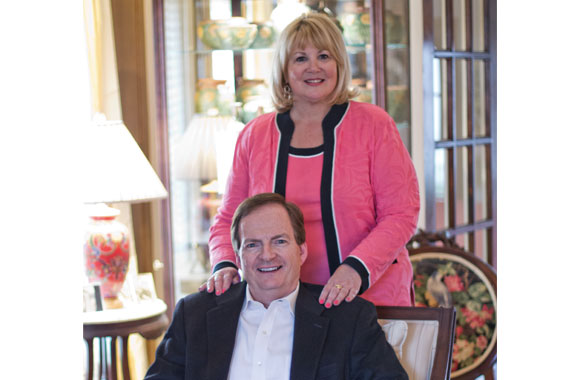 Dr. Dan and Mary Ryan have lived in their Flint home in Woodcroft Estates for 26 years with their cats, Calvin and Chanel. The couple’s love of art is evident in the beautiful framed paintings adorning the walls throughout their home. The English Tudor-style house, surrounded by extensive gardens, was built in 1938 by Theodore and Pearl Curtis, the original owners of Curtis Flowers, a longtime florist shop in the city of Flint. Dan and Mary are fervent supporters of the arts in Flint, dedicated to seeing people appreciate its rich, cultural variety.

Dan is a practicing ophthalmologist while Mary is now retired from a 25-year career in nuclear medicine at McLaren-Flint. It would be difficult to find a pair more actively involved in the cultural community than the Ryans. The couple zealously supports the Flint Institute of Arts and the Flint Institute of Music, and they enjoy attending events whenever they can. “We bring people in from out of town and show them all the good things in Flint,” said Dan. Throughout the years, the Ryans have opened their home to music students who travel to Flint to compete in the William C. Byrd Young Artist Competition, an internationally acclaimed event held annually at the FIM.

As supporters of the performing arts, Mary and Dan are both members of the Flint Community Players. Mary played the part of a dancer’s mother in “The Full Monty,” and both Dan and Mary had roles in “Jesus Christ Superstar.” Dan said he enjoyed playing the character of a British diplomat in “The King and I,” which he called “a fabulous production.” Ever respectful of the storied history of the theatre, the Ryans enjoy taking part in the Shakespeare Club. “We learn a lot about Shakespeare that way,” said Dan. Dan is also president of the Flint Master Singers, for which he sings baritone, thanks in part to the voice lessons he took at the FIM. The club performs at local Genesee County parks. “We do show tunes, religious music, pretty much everything. It’s a great group,” said Dan. “The arts are what bring so much pleasure to the community” Mary says, explaining why they go out of their way to get involved with fundraisers like the FIM’s Seeing Stars, which provides scholarships for talented children.

The Ryans are also very involved in supporting activities that will help sustain the arts. They host an annual dinner to raise funds for “Growing Up Artfully,” a program that sponsors underprivileged children, allowing them to attend events at the Cultural Center that they otherwise could not. “We do what we can to make sure young adults and children have opportunities to enjoy and appreciate the arts as much as we do,” said Mary.

During the summer months, you will find the Ryans outside tending their gardens, visiting the Flint Farmers’ Market and devoting time to the community gardens. In May, Mary was busy planting flowers in Downtown Flint with the Genesee Green Team Garden Club. “We love to garden and that’s what we do every day in the summer,” said Mary. “Hydrangeas are my favorite,” she added with a smile. They also enjoy the delicious food offered in Downtown’s restaurants, and are happy to “do their duty” by dining out to support these businesses. Also look for Dan and Mary enjoying Flint’s many Downtown events, including Back to the Bricks, Bikes on the Bricks, the Art Walk and the CRIM Road Race, just to name a few. “If you really want to be part of a community, you need to be engaged and involved in its events,” Mary encourages.

The Ryans have made Flint their home because they see its inner beauty. Mary fell in love with their house and Dan’s practice is just a short distance away. They both love the neighborhood and are dedicated to revealing and nurturing Flint’s beauty by actively participating in and contributing to the arts programs. “We’ve made wonderful friends here,” said Mary. “This is our home and will continue to be so,” said Dan. “We’re here for the long haul.”