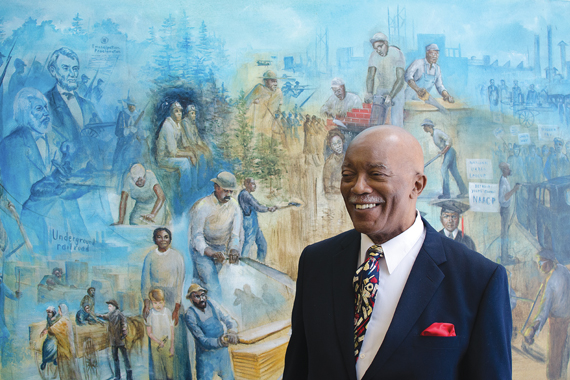 The word prolific is no exaggeration when used to describe local artist, Lavarne Ross. Better to call him a factory, producing art at a rate that could have kept up with General Motors in its heyday. While the number of paintings Ross has created in his lifetime is truly astonishing, even more incredible is the range of his subjects. Every piece is original, with artistic genres ranging from abstract to portraiture.

Now through April 27, a sample of Ross’s works on paper chronicling the Vehicle City’s changes over the course of his remembrance will be exhibited at the FIA. Other works are on display at the Greater Flint Arts Council, at Lawrence E. Moon Funeral Home – fondly referred to as the L. Ross Gallery – throughout town and across the globe. “I actually don’t even know where all of my paintings have gone in the last 50 years,” Ross mused during an interview with My City Magazine at the Flint Public Library, where he introduced the pieces displayed there last month and shared his life experiences. With his paintings in high demand across the United States, Europe, and even in such far-flung places as Johannesburg, South Africa, Ross says that life as an artist is a blessing, the same word he uses to refer to his talent. “People say such funny things about art. They critique it and read into it, but in the end my art is just me. Talent is God-given, and nobody can tell your story except you.”

Born in Flint at 911½ Pasadena Avenue – “I didn’t give my mother time to get to the hospital,” he reported with a chuckle – Ross remembers his first artistic experience as a young boy of five. “Color has always captivated me,” he said, “I remember one overcast day, when everything was gray. There was a service truck on our street with a yellow light blinking on top. To my eyes, that yellow light appeared to be the only color in a grayscale world.”

As the poor son of a black single mother in the 50s, Ross’s first encounter with formal art did not take place until he was eleven. A teacher at Jefferson School recognized his talent and enrolled him in a downtown class through the FIA. Ross began to experiment with art, his only studio being a ledge in his basement. Shortly thereafter, when he was only 13 years old, he sold his first work to his grandmother’s neighbor. “Early success encouraged me,” Ross said with a smile, “but things soon got tougher.” In high school, Lavarne finagled his schedule to fit his artistic hopes, assisting the art teacher and doing independent studies. “My mother couldn’t afford to send me to college, but I desperately wanted to go. I remember how one teacher, when I told him of my dream, said to me, ‘Get a job at GM like the rest of your people.’ I was crushed.” 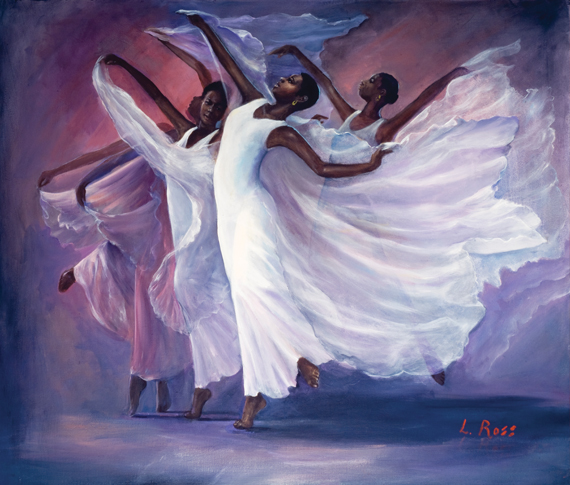 Lavarne did get a job at GM. In fact, he worked at AC Sparkplug for 35 years. “I hated the industrial environment,” he recalled, “because it was not conducive to an artist’s mentality, but my colleagues were very supportive.” Ross found a way to make art a part of his life, completing children’s portraits and cartoons for his colleagues and painting at night. To this day, his formal art education consists of a correspondence course that his mother helped pay for, and a few classes at Mott Community College. One class and a lifetime of encouragement was all that she could offer, but it meant everything to Lavarne. Moreover, Ross’s artistic method is refreshing and original, which is not always the case with artists who have had their creativity wrung out and squashed in art school. Ross may be the definition of self-taught, but he says he received a lot of support and advice from his mentor, Al Washington, Sr. “Al told me to come to him anytime, and I certainly took him up on his offer!” he recalled.

Life as an artist has been interesting for Lavarne. “I was struggling along,” he recalled, “and I remember once, B.B. King came to perform at The Whiting, and somehow, someone in the right place knew about a portrait I had painted of him. They even arranged for me to meet him. He looked at my picture and said it was very nice, and went on with his show. Well, after the show, he came back and bought it!”

Eventually, management at GM noticed Lavarne’s talent, and for their 75th anniversary, they commissioned him to paint a number of commemorative murals, many of which are now on permanent display at the Genesee County Courthouse. This project opened a number of doors for Ross, and eventually, he was “loaned out” to do work for other projects, including at the New McCree and Bower Theaters. “That milieu inspired my dancer paintings,” Lavarne reported. His art career at GM culminated in the 124-foot mural he painted during the two-week Christmas vacation in 1998, right before he left the company. “I was paid triple-time wages, and that painting remains the most expensive piece of work I’ve ever done,” Ross laughed.

Today, Ross continues to paint from memory, from photographs, and from the inspiration he takes from color. While the paintings displayed at the FIA are filled with both nostalgia and sorrow, telling stories from his youth, black heritage and the city of Flint, Lavarne sees his abstract work as an invigorating challenge: “It gives me a chance to flex my artistic muscles,” he said. Whatever his choice of subject, Ross says that the underlying idea is always to shape the reaction of the viewer, to captivate them as he is captivated. Many of his pieces are heavily layered with symbols, while others are purely aesthetic, but each one impresses the viewer with an unshakable feeling. “I love to see people appreciate my art,” Ross said, “because it makes me feel like we have connected in our minds, my viewers and I.” 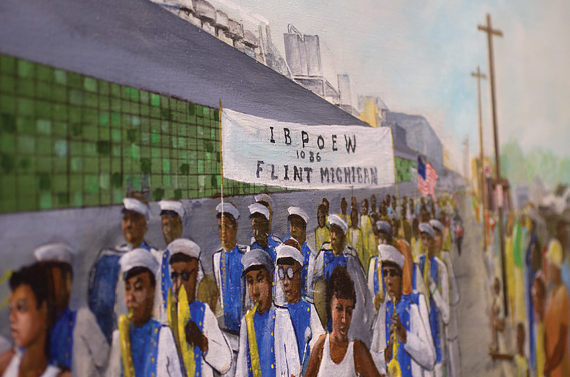 See more photos HERE, or purchase photos from this story by going HERE and selecting the “Lavarne Ross” category.