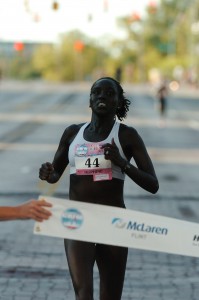 Here’s a question asked by many Flint area residents who are familiar with the Crim. Why do runners from Kenya always win the ten-mile run in the Health Plus Crim Festival of Races? Since 1992, a person of Kenyan nationality has won the race 19 times! Just how do the Kenyan competitors run so fast? MCM went to an expert to see if we could get the answers.Greg Meyer is the Elite Athlete Coordinator for the Crim and a well-known runner himself, having won the ten-mile race in 1978. “Running was my life for a number of years,” he recalls. As the winner of the Boston Marathon in 1983, he was the last American to win the famed marathon until this very year. He also set ten American Road Racing records and two world records and is a seven-time winner of the River Bank Run in his hometown of Grand Rapids, just to name a few of his accomplishments. Now it’s Greg’s job to bring in elite competitors from around the world for the Crim on a decidedly modest budget.Elite international runners began participating in the Crim early on. “The city of Flint adopted the foreign runners as part of the race fabric almost since the beginning,” says Greg. For the past three years, Julius Kogo from Kenya has won the ten-mile race, and he will return this year to attempt a fourth win. Greg, however, hopes to see some real competition. “I don’t want to see one guy out there running alone,” he laughs. “I like to see the crowd get excited as they witness a close race!” When speaking with My City Magazine, Greg was still in the process of deciding on whom his budget will be spent. At that time, 11 elite female athletes and 11 male athletes were locked in for 2014. Greg explained that all of the Kenyan runners have agents, and he receives many calls and e-mails, but not all of the hopefuls have the level of experience necessary to compete.As to why athletes from Kenya are such good long distance runners, one study suggests it is due to their extreme thinness. That same study suggests that it could also be because they spend their childhood “training” by running/walking to school and working in the fields. Another study suggests that their athleticism is genetic. Greg explains it this way, “For the Kenyans, Ethiopians and Africans in general, racing is the primary sport.” Hundreds of Africanss have made a career of running in races all around the country, he explained. “They become a runner and that is how they make their living; there are many Africans racing all over the United States.” And while the winnings may only amount to $1,000 every other month, this makes the Kenyan runners very wealthy by their country’s standard.The Vehicle city has truly embraced the Kenyan competitors, according to Race Director Andy Younger, and having world class runners at the Crim spotlights the city in 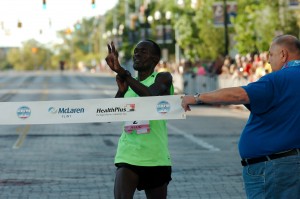 a positive way, he says. He also said the elite runners receive great hospitality from city residents, and shared one example from last year. Unlike many runners, those from Kenya do not prefer to “carb up” by eating the heavy pasta meal traditionally served the night before the race. Instead, they want to prepare a traditional Kenyan meal of Ugali, a light and bland dish of tomatoes, cabbage, collard greens, onions and corn meal dough. Elite Hospitality Coordinator Rosanne Heddy made that happen by arranging for the Kenyan runners to use the kitchen at The Lunch Studio in Downtown Flint. “Many of the Kenyan runners don’t speak English, and this is the diet they are used to eating, so it reminds them of home and provides comfort while in a strange country,” Andy says. This year, he hopes to arrange for use of the kitchen at the Community Center located in the new Farmers’ Market. Greg Meyer looks forward to this year’s Crim. “It’s always a good Crim,” he smiled. “Elite athletes are the icing on the cake, but it’s the thousands of other runners who ARE the Crim. The Kenyans enhance our event, but it’s everyone together that makes the Crim what it is.”