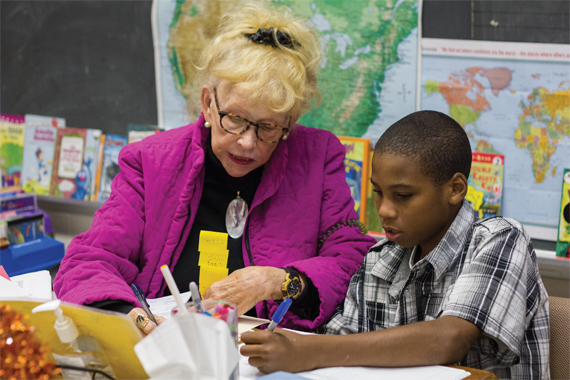 Once upon a September, on a quiet lane in North Flint, there was a clubhouse. Not a stuffy clubhouse for the wealthy, but the dream clubhouse of any child, containing a whole room just for arts and crafts, a big gymnasium, a reading room stuffed with literature for bookworms, a game room, a cafeteria, even a recording studio and a greenhouse out back; in short, everything a kid could wish for or imagine for a hangout space. This is the Boys & Girls Club of Greater Flint-Averill Unit.

For ten dollars a year, any child between the ages of 7 and 17 can become a member of the Boys & Girls Club, giving them unlimited access to their local unit from 3-8pm every weekday. “The ten-dollar membership fee, rather than covering the operational cost per child, gives the children a sense of pride and ownership in the club,” says Sarah Pinder, Director of Development. “They really feel that this is their place.” Although there is no requirement to be there on a daily basis, each weekday at 3pm on the dot, children begin piling into the Averill facility. They check in their coats and book bags and proceed to “power hour,” as the period dedicated to homework or other academic activities is known. Afterward, the other rooms open up, and children can join in any of the myriad crafts and games taking place. The nine full-time and six part-time staff members oversee the rooms to ensure safety and orderliness, and a few of them run more structured programs, such as a steel drum band, and cheerleading practices. Around dinner time, children are released to the cafeteria by age-group, if they wish to partake. Dinner is provided by The Food Bank of Eastern Michigan free of charge.

The core programs at Boys & Girls Club are designed to help kids develop character in five key areas: leadership; education and career; health and life skills; the arts; and sports and recreation. Through partnerships almost too numerous to count, including the Flint Police Activities League, the Flint Youth Theater, the Children’s Museum, the Genesee County Parks, etc., the club is broadening the horizons of Flint youngsters while helping them grow up to achieve their full potential.

One program in particular at the Averill Unit is making a difference in education, through a woman known at the club as “Dr. J.”

Jacquelyn Reinertson, Ph.D., is a highly educated woman who has worked with literacy in some capacity for the majority of her long career. As a teacher for many years, then as a reading consultant, and finally as a literacy evaluator, Dr. J knows the ins and outs of childhood reading struggles. In 2009, she was hired to establish and run a new room dedicated to reading at the Boys & Girls Club, funded by Mott Children’s Health Center. The room was meant to be a resource that would help kids learn to love reading and improve their abilities through storytelling and literacy games and projects. As much as she enjoyed this work, Dr. J quickly realized that she was not reaching the children who were struggling, because those children were in the gym, or the art room, or just about anywhere else on the property during their time at the club. “I firmly believe in bringing the joy of reading to everybody,” she says. So Dr. J went on a mission to influence those who struggle with reading and help them find success and enjoyment.

Today, through the generous funding of Mott Children’s Health Center and its director, Lawrence Reynolds, M.D., Dr. J conducts individual tutoring sessions with 16 students of different ages at the Boys & Girls Club. Each child meets with her for 30 minutes, twice a week. Most of the kids are recommended from MCHC, many of whom have disabilities such as autism, dyslexia, ADD, or ADHD, and all of the children are behind in reading. “The average lag in achievement of my students coming in,” Dr. J reports, “is two grade levels.” Bob Nelson, Executive Director of the Boys & Girls Club of Greater Flint, says that the limitations placed on these kids by their lack of reading ability will cripple them for the rest of their lives if there is no one willing to change the projection of their course. “Think about our world today: communication is the most important part of everything we do, and without the ability to communicate, learn, and teach ourselves— in short, to read—these children will be trapped, unable to join society as functioning adults.”

Determined to change the course of her students’ lives, Jacquelyn spends the first 15 minutes of each session on spelling and word recognition, while the following half is devoted to reading practice. Children read aloud from a book of their choosing to practice comprehension and fluency. “Everyone needs to do something that gives them joy,” says Jacquelyn, “and what gives me a high is the light bulb moment: at some point in all the tedious repetition and frustration, a child suddenly realizes that it all means something. All those letters—you can build words with them!” Dr. J says that after this epiphany, it becomes much easier to push the children forward. “Once they’ve gained a ‘student self-concept’ as I call it, they want to discover and explore literacy for themselves. Success empowers them.”

Dr. J, although she is the literacy crusader at the club, says that she wouldn’t be nearly so successful without the assistance of Betty Huntley, who is called “Grandma Betty” at the club. Grandma Betty doubles the children’s practice time by reinforcing the words that they learned with Dr. J through two additional 30-minute sessions on alternating days. She also takes time to bond and encourage each child; “I’ve sort of adopted them,” she said with a smile. As a member of the Foster Grandparents program at the club, Betty says that building up her students’ confidence has boosted her own feeling of self-worth. “When you know you’ve helped their grades, it gives you a sense of pride you can’t get doing anything else,” she said.

The results of Dr. J’s literacy program are astounding. Last year, for example, children in the program improved a total of almost one year and three months in comprehension, one year and six months in vocabulary, and one year and two months in spelling. Not only were they no longer actively falling behind, they were making up for lost time. “A few of the children made such rapid progress that they are now caught up or above grade level!” Dr. J proudly wrote in her annual literacy report. Bob Nelson says that the literacy program is an exemplar of the desires and goals the club has for its members. He calls Dr. J a blessing, saying, “When you have a woman like her, someone willing, able, and committed to making changes in the kids’ lives, it’s amazing.”

The Boys & Girls Club of Greater Flint is proof that all children can flourish in a safe and positive atmosphere. “We set high expectations for the kids,” Bob says, “but we have high expectations for ourselves as well, and that is one reason we are so successful.” Most of all, the Boys & Girls Club is just plain fun. “The range of activities that take place at or through the club is just astounding,” Dr. J says. “As a parent, it would be impossible, even if you had the funds, to give your children all of the wonderful experiences that the club offers, not to mention the friendships they form, the role models they meet, and the opportunities they are offered.” The Boys & Girls Club is not just a place for kids to be kids, it’s a place where kids come to be great kids.

Are you interested in purchasing photos from this story? Go HERE and select the “Boys and Girls Club” category.