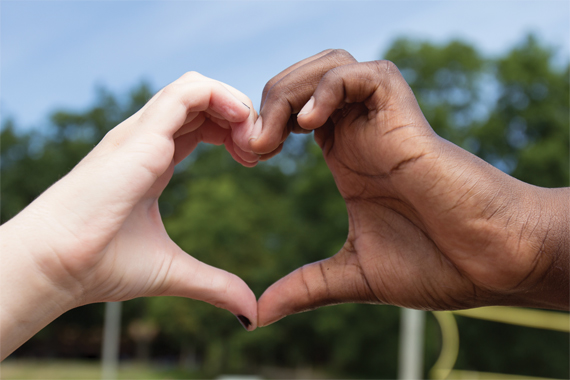 As the sun emerged on August 3 for the first time in a few days, Camp Copneconic in Fenton bustled with activity. Campers were at the beach enjoying the lake, and screeches of laughter could be heard as children played on the Aqua Jump, Blob, Aqua Glide and Rock-it. For many kids, summer camp is a place to create lifelong memories. In fact, when Mona Sahouri’s children, Andrea and Alexander, went to Camp Copneconic Summer Camp as youngsters, the experience was so exhilarating they didn’t want to come home. As the director of the Arab American Heritage Council (AAHC), Mona is passionate about giving all children the camping experience.

AAHC is now in its fifth year of providing scholarships for children of any heritage to attend the AAHC Summer Camp. The idea is to provide a program for youth whose families might not have the means to send their child to camp. “We want to support hardworking families,” says Mona, “and we wanted to choose a camp that would give them the ultimate camping experience. Camp Copneconic is the best camp around.” AAHC works with other nonprofits such as the YWCA, Priority Children, United Way, and religious organizations to find kids who are interested in making friends with someone from a different background. “Our services extend to everyone,” Mona added.

AAHC provides two Arab American counselors to shadow the Camp Copneconic counselors throughout the summer. The idea is that kids receive a full camping experience that is also infused with culture, tolerance and diversity. “The counselors work very hard to share the true face of our Arabic community,” says Mona. The counselors spur conversation between the kids, challenging them to think about their heritage. Kids from a variety of cultures were present at the AAHC Youth Camp this summer, including African American, Italian, Arab American, Indian, Caucasian and Hispanic children.

The five-day session held July 29 through August 4 consisted of daytime and overnight camping for three different age groups, featuring a daily one-hour cultural activity. “I liked teaching the kids new things about Arabic culture,” said Hazar Abuaitar, a Day Counselor at the camp, who reports that the campers particularly enjoyed learning to write their names in Arabic. They also learned the Dabkeh, which is a traditional Arabic line dance typically performed at joyous celebrations and weddings. They enjoyed making friendship bracelets using beads in the colors of the flags of their country. “It’s all about making friends,” Hazar added.

By helping to familiarize kids with other cultures, the activities are intended to promote tolerance of others. “Our community is divided, whether we like to admit it or not,” Mona said on a more somber note. And just how do we fix that? “We start with the kids,” she says. Families may have prejudiced views and children tend to take on the views of their parents. However, by learning about the cultures of others, children may change their learned way of thinking. “Education, knowledge and learning to be tolerant of other people: that’s how we make a change,” Mona says.

Yara Abuaita was the counselor for the overnight campers. She enjoyed watching kids from different backgrounds learn and grow together. “We are such a diverse group. I love it; it’s wonderful!” And while teaching the campers, she has learned from them, as well. “I learned how to accommodate different personalities and be open to people,” she laughed. “I wasn’t expecting to form such close bonds with them.”

My City Magazine caught up with some of the campers, Landon, Antonio, Bissi and Amani, enjoying activities such as zip-lining and archery. What did they like most about summer camp? Just plain old fun in the sun with their new friends. Landon most enjoyed fishing and the zip-line. Campers earned points for how far they traveled on the zip-line. “I made it into the 20 basket!” he boasted. Antonio said he liked swimming the best. “I made a lot of friends,” said Amani. The children also said that they enjoyed the long-held tradition of a campfire.

Mona hopes to see the AAHC Summer Youth Camp program continue to grow in the following summers. She was pleased that a $1,000 grant from the Ruth Mott Foundation and $3,000 from the Community Foundation of Greater Flint helped AAHC award scholarships for all of its campers this year. “We look to improve every year.” she said. “By simply spending a week together having an awesome time, these kids forge diverse and genuine friendships that no amount of prejudice will be able to tear down: a true American aspiration!”

Are you interested in purchasing photos from this story? Go HERE and select the “Camp Copneconic” category.