Imagine the pioneers of Flint’s past greeting you as you submerge into the basement of one of Flint’s oldest houses – a basement currently passing for an artist’s studio. Its inhabitant, Joe Rundell, resides there most of every day, re-capturing Flint’s founding fathers in clay, bronze, and brass sculptures. Among the various tools and hunks of clay strewn about, something incredible happens.

Within Rundell’s “trophy room,” and amidst hundreds of books – most on Ancient Egypt and World War II – Bobby Crim, C.S. Mott, Chevrolet, Durant and Buick are nestled in corners and shelves. Some of the sculptures are currently busts, but Rundell has plans to fully construct them someday.

Perhaps the most unique aspect of Rundell’s process is the tools he uses – his hands, of course, and sharpened chopsticks from Chinese restaurants. Rundell claims he’s not only proficient with chopsticks in the artistic sense; he can also eat with them.

Rundell began drawing World War II airplanes in 1951, when he was 11. He picked it up mostly on his own, and his mother signed him up for a Famous Artist Course offered in magazines, which he still uses as reference material. In 1959, when he graduated high school, Rundell won the Proficiency in Art award. “I needed something that I could be proud of,” he says. “It was the only thing I was good at.” For two years after graduating, he worked at Hock Advertising in downtown Flint, earning a dollar an hour as an artist. After that, he had a job at Chevrolet V8 Engine as a machine repairman for a wage of $2.49. By 1961, he and his wife had their first son. 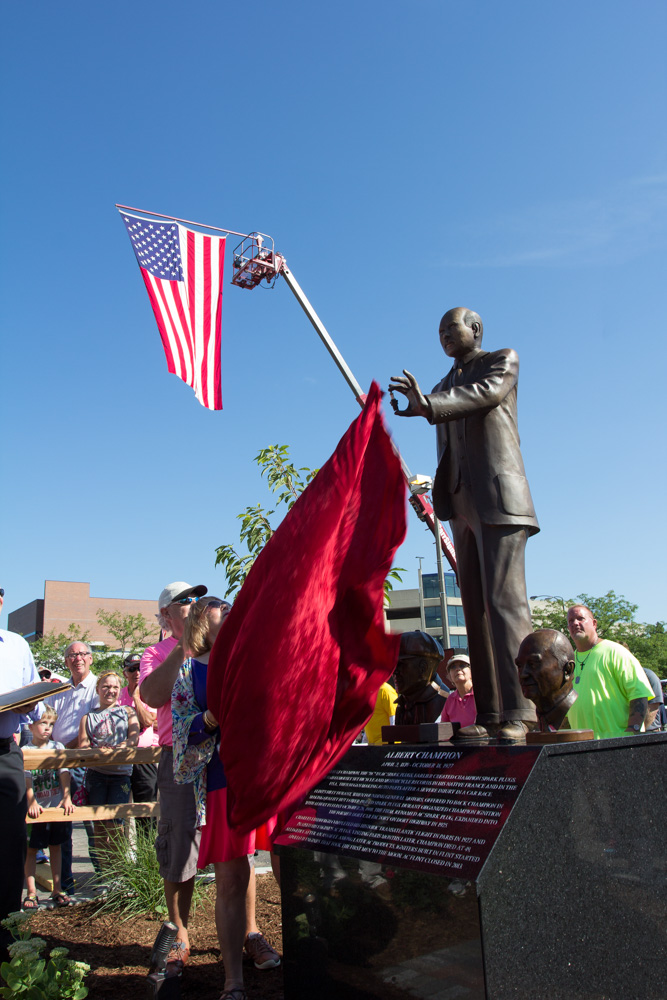 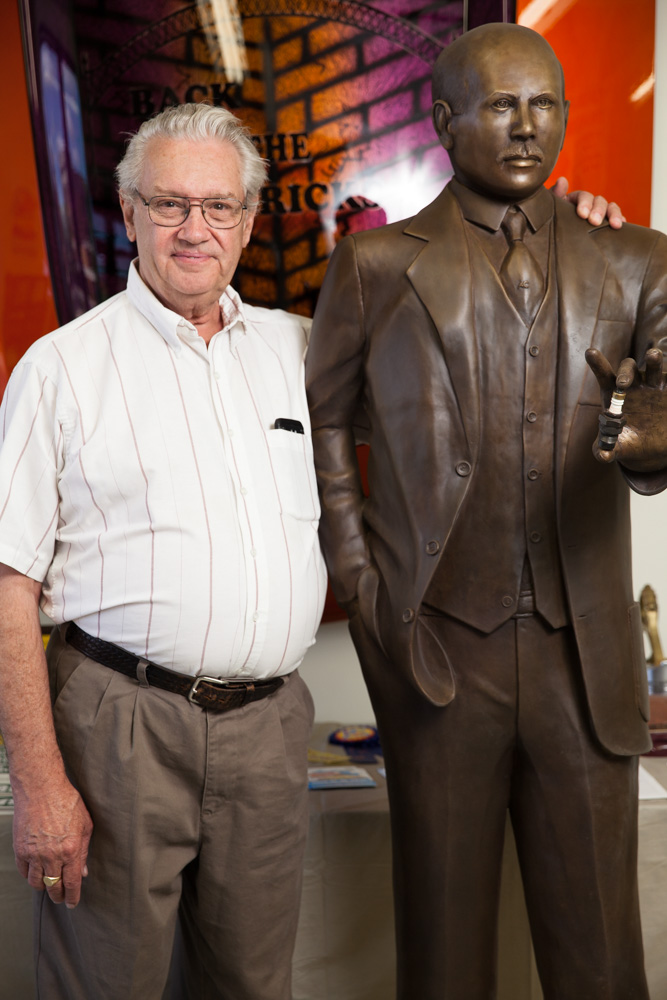 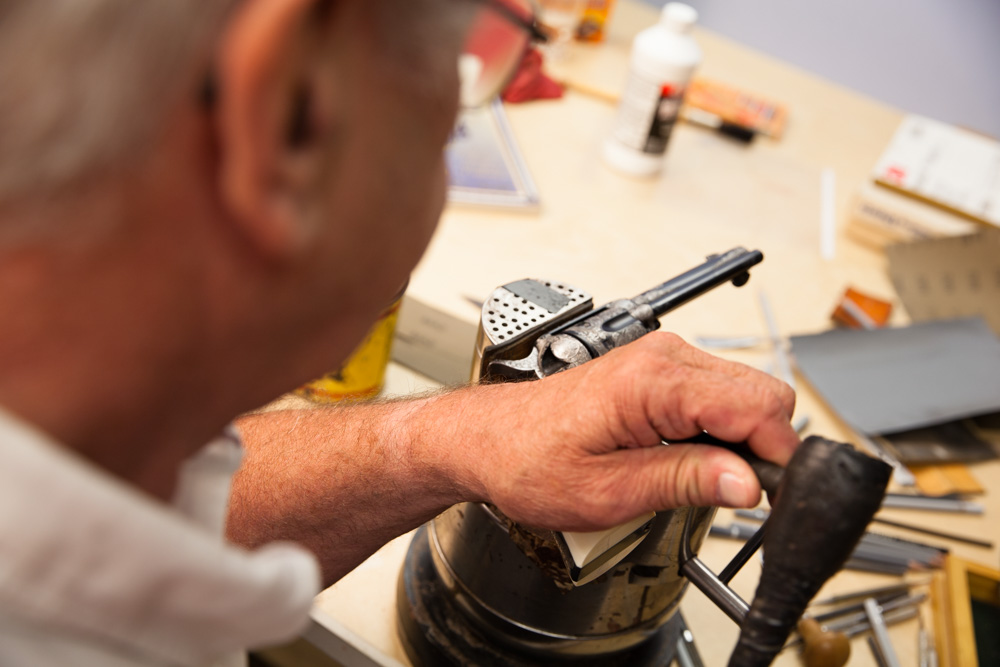 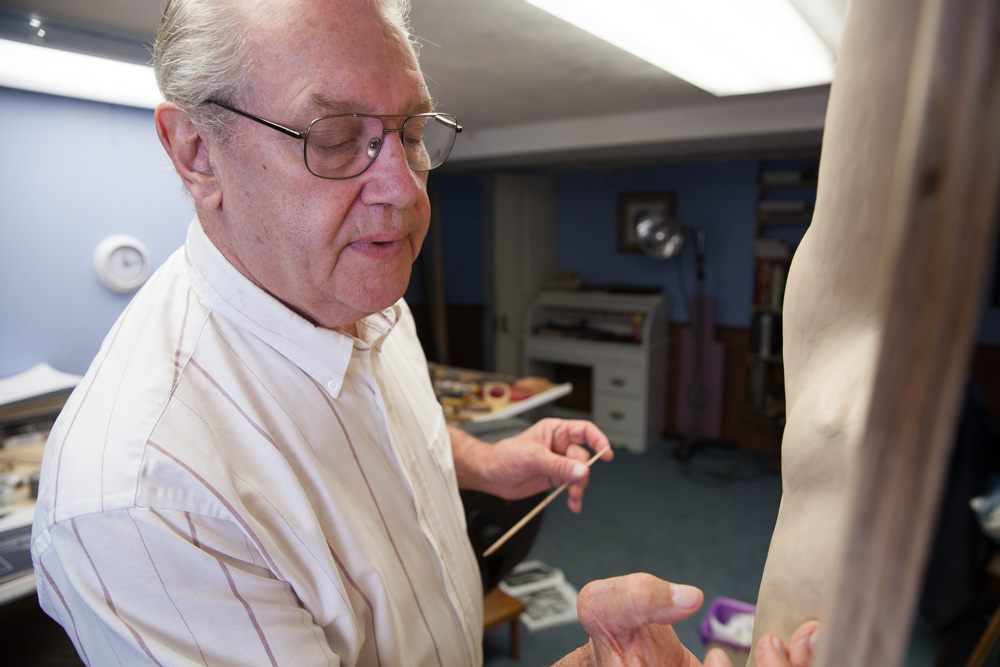 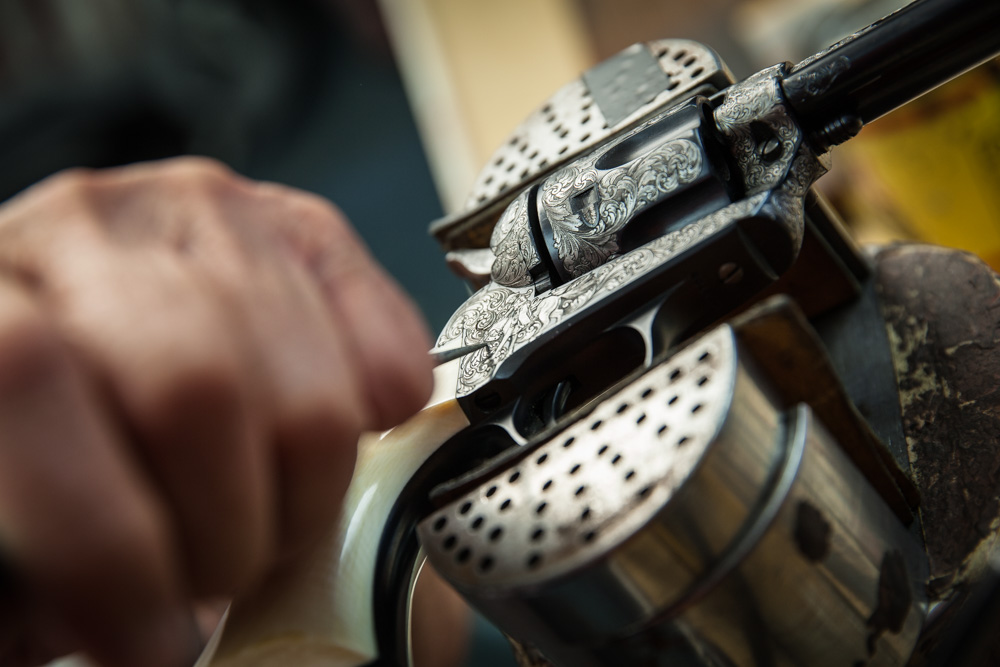 Eventually, rifles and pistols became an area of interest. Rundell liked Kentucky rifles, and began building 25 or 30 of them at a time. He became proficient enough that some of the guns made it into books and magazines in the 1960s. “The gun was never finished until you had your name engraved on the top of the barrel,” he explains. He creates his additional signature by engraving into the steel a coin from the year the gun was originally made.

Englishman Ken Hunt is a source of inspiration for Rundell, especially when it comes to gold overlays. He shares, “In about four or five hours, I learned a lot more from him than I did from any others combined.” In the most simplified way, he explains the process: “In inlay, you cut down into the steel and remove the steel. It’s like a cavity – you fill it. For overlay, you roughen the surface, using a cross-hatch method, and you’re using a tiny knife to set up a pattern.”

One of Rundell’s smaller handguns with gold overlays took him about 3,000 hours to complete. Although he doesn’t prefer one medium over the other, he equally divides his time between the two. “When I work on these too long, I feel that I need to do some engraving,” he says.

Rundell’s engraving career began when he found tools in a cigar box for $3 at an antique shop – which was hard to justify spending at that time. He only uses hand-pushed tools, nothing electric. Teaching himself the engraving techniques, he claims he has “given blood” to his process on multiple occasions. “For a long time, I never did get the angles and things correct,” he admits.

Some gun shops and collectors, like in Austria and Oklahoma City, commission Rundell for his engraving works and although it helps pay the bills, he prefers doing his own work. Sometimes, he refurbishes the stock, forearm and grip of a pistol before he begins engraving it, such as a 1904 38-40 Colt, given to him by an old friend. He completely re-did the gun, and signified its age by engraving a 1904 silver dollar into it. Rundell made new screws for the gun, engraving over the screw heads so that they are practically invisible. Despite the creative notion that “an artist’s work is never complete,” Rundell tends to disagree; he says, “Sometimes, you have to put an end on some things.”

When sculpting, Rundell’s gentle concentration gives him the power to bring pieces to life. For his Back to the Bricks works, he starts with pipes for the statue’s skeleton, then makes a bust of the figure to show Back to the Bricks officials what the completed piece may look like. He then adds clay around the pipe, claiming “it looks like a Tootsie Pop.” Rundell uses knives to cut it down to the size he wants, working from the face down – from the head, to the collar, shoulders, arms, and so on. He tries to keep the original clay sculptures, which he rescues from the foundry.

At Back to the Bricks in August, the Albert Champion statue was unveiled at the GM Automotive Pioneers Plaza in downtown Flint, joining the other statues. Champion now stands eagerly in bronze, fittingly holding a sparkplug. Rundell hopes to continue creating one to three sculptures a year, either for Flint or for himself. His other plans include many ideas for more statues that could be displayed all over downtown. “People will come to Flint to see them,” Rundell believes.

Currently, Rundell is putting final touches on a piece for ArtPrize international art competition in Grand Rapids. It will be displayed September 23 until October 11. The piece is a relief sculpture re-make of Bernini’s Apollo and Daphne, which illustrates the Greek myth.

With a grin on his face and a twinkle in his eye, Rundell tells us, “I don’t plan to hang up my chopsticks any time soon.” 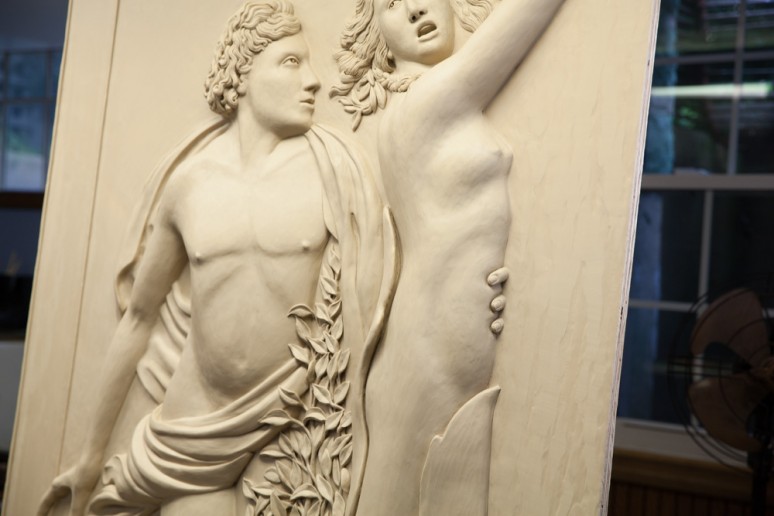 Rundell’s current project is a re-make of Bernini’s Apollo and Daphne.