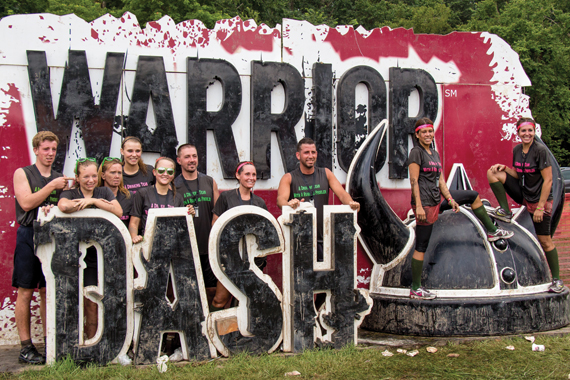 Three! Two! One! The Warrior Dash begins! “Everyone, be safe!” said the announcer as the first 300 runners dressed in a wide array of costumes and head gear began their mad dash around the grueling 3.3-mile obstacle course to the wild cheers of spectators.

For My City Magazine, the day of the eagerly anticipated Warrior Dash began with a drive down Mt. Morris Road early Saturday morning on July 27. The air was misty as hundreds of cars lined up, the passengers waiting patiently to enter the gates of the Cummings Center to compete in the ultimate event for thrill-seeking athletes.

More than 26,000 runners competed in this year’s two-day event, braving obstacles including a fire wall, mud pit, old vehicles and barbed wire. The smell of mud permeated the air. Many participants were dressed in costumes, from bright tutus to fuzzy Warrior helmets and everything in between. Survivors of the intense obstacle course were treated to Warrior grub and suds – turkey legs (as big as a warrior’s club) and beer – or other beverages for those who chose not to indulge. It was a festive affair, with families and spectators lining the course to cheer the dashers on while live music played in the background.

Randi Watchorn wore an orange and green tutu for the event; she and her friend Karen Zehnder of Frankenmuth completed the obstacle course for the third consecutive year. “It’s just plain fun,” says Karen, who runs in a lot of different races and enjoys the uniqueness of the Warrior Dash. “We don’t get to play on the playground every day,” she laughed. Both of the women say they feel a sense of accomplishment after the race.

James Scofield of Lansing was decked out as Spiderman for his third Warrior Dash. While scaling buildings is a piece of cake for this adventure hero, the water obstacle was quite challenging for him. He reported that the course was more difficult than last year’s, but that won’t stop him and his friends from coming back in 2014. What was Darcey Kondel’s favorite part of the event? “The beer at the end!” she exclaimed, adding that the mud pit was the most difficult challenge for her. Covered in mud, she said she had to sit down to get through the pit, crawling under string after string of barbed wire.

Also competing in her third Warrior Dash was Nancy Edwards, a Genesee County Parks employee and self-described 57-year-old, overweight non-athlete. “My philosophy is that I can’t ask someone to do something I haven’t done,” she laughed. “And I wanted to see if I could do it.” It was incredibly challenging for her, and at times, she needed a helping hand to overcome an obstacle. Her goal was to “not finish last.” Other competitors were always willing to give her a boost when she needed it, especially Nancy’s husband, Shane Schmitt, who joined her in the contest. “There is a wonderful sense of camaraderie: everyone wants everyone else to be successful,” she says. One year, a dasher dressed as the cartoon character Sponge Bob SquarePants pushed Nancy over some of the more challenging obstacles to ensure she would make it.

If you don’t like playing in the mud or getting dirty, the Warrior Dash may not be the thing for you; but Nancy didn’t mind it at all. “Sometimes, adults forget how to play; the Warrior Dash is a reminder that it’s okay to play,” she laughed. “It’s okay to get as muddy and as dirty as you want!” According to Nancy, you climb up things, you crawl through the mud pit and at the end you say, ‘Oh my gosh, I did it!’ “It’s such a feeling of accomplishment!” she exclaimed. What follows is the best part of all – socializing with friends, eating turkey legs and sharing the euphoria with the other contestants.

After completing the obstacle course, competitors took off their muddy shoes and placed them in a pile. What was to become of the huge mounds of shoes? In partnership with USAgain, Warrior Dash presented participants a unique opportunity to recycle surplus shoes this year. Shoes will be diverted from landfills, cleaned, and given a second life by people around the world, making Warrior Dash a unique recycling operation. USAgain also made a charitable donation to St. Jude Children’s Research Hospital on behalf of Warrior Dash.

Amy McMillan, Director of Genesee County Parks, was excited about this year’s event, which made a whopping $5 million economic impact in Genesee County. She says hotels, restaurants, camp grounds, gas stations and grocery stores in Genesee County all love the Warrior Dash. She is also excited that the competition will return to Genesee County for a fourth run. In fact, many warriors are already gearing up for next year’s event. Want to dress in a crazy costume, play in the mud, challenge yourself to the max and have a whole lot of fun? Bring out your inner warrior, and My City Magazine will see you at Warrior Dash 2014!

Are you interested in purchasing photos from this story? Go HERE and select the “Warrior Dash” category.