Just east of Toronto on the shore of Lake Ontario in his hometown of Pickering, Brennan Othmann spent hockey’s offseason finding ways to stick to a disciplined training regimen.

That was not easy for the crafty, smooth-skating forward and his Flint Firebirds teammates during a global coronavirus pandemic. Fortunately, Othmann, one of the Ontario Hockey League’s most impactful rookies last season, was eventually able to skate most afternoons with some of his former midget-level teammates before working out with a trainer in his garage.

“I’ve had to get a little creative to put in the same amount of work as other offseasons, but I’ve just been trying to stay loose, stay positive and focus on getting bigger and stronger,” the 17-year-old said. “At the end of the season, I was probably 5-foot-11 and a buck, 65 (165 pounds). Now, I’m almost six feet and nearly 180 pounds after adding muscle. I’m really looking forward to seeing the boys again in Flint and having a great season.”

Othmann saw some of the boys who also live in the Greater Toronto area and kept in touch with other teammates and coaches virtually. One topic of conversation is how incredible last season was – until it wasn’t. In a remarkable turnaround under second-year Coach Eric Wellwood, the Firebirds went from the worst record of their five seasons in Flint (16-46-6, .279 winning percentage) to the best (40-21-1-1, .651).

A 15-game winning streak in January and February helped Flint surge to fifth among the OHL’s 20 teams with a team-record 82 points. The Firebirds appeared poised to win their first playoff series until coronavirus began taking hold in North America. The season was paused March 12 before the final six regular season games were cancelled on March 18 and the playoffs were called off five days later.

“That was really tough and devastating for everybody involved with the team, not just players,” Othmann said. “We were a great group of guys all ready to make a big run at a championship.”

The suddenness of it all hit Wellwood hard.

“Everything happened so abruptly because, at first, we were hoping to be back in two weeks,” he said. “It took a while to process when it was really over. It was just pure disappointment and I felt extremely bad for the guys I knew would not be back. We knew we could have done some damage in the playoffs.”

Despite the season being cut short, the Firebirds also set team records for victories and goals (274), but Othmann and his teammates soon turned their thoughts to the coming season. 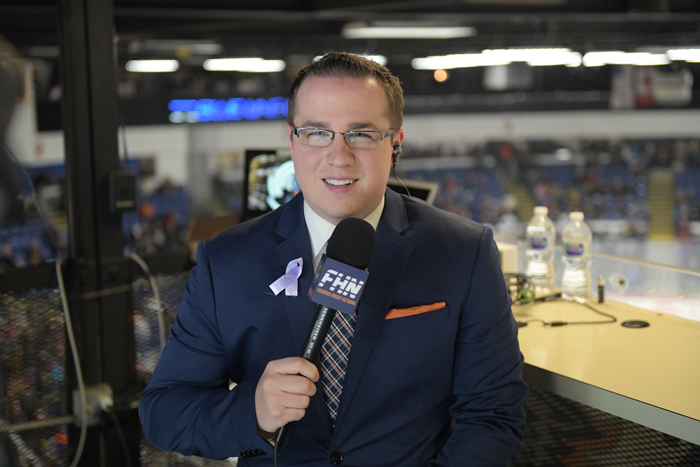 “Despite everything, we had one of the
best offseasons in franchise history.”

When could it start? What protocols will be in place? What about fans? Those questions were finally answered in September when the OHL announced its return-to-play plan. Training camps are scheduled to begin November 16 with preseason games the weekends of November 20-22 and 27-29. The regular season opens December 1 and runs through April. Playoffs begin May 2.

Although nothing ever seems certain in the age of coronavirus, Othmann and others were elated by the news. Flint has become a special place for him since being taken second overall by the Firebirds in the 2019 OHL draft.

“When you ask what the team’s biggest strengths are, I point to how we are all buying into what Coach Wellwood is saying and how much we love playing in Flint,” Othmann said. “Too often, you hear so many negative things about Flint, but we don’t see it that way and love how the town is behind us. The whole organization is first class and treats us like NHL players. We can ask for anything.”

Not surprisingly, there will be far fewer fans cheering on the team Flint has embraced when games begin. The Firebirds averaged nearly 2,900 per game last season in the recently renamed Dort Financial Center. Team president Jeremy Torrey said in mid-October that the state’s current guidelines will allow roughly 500 fans to attend. 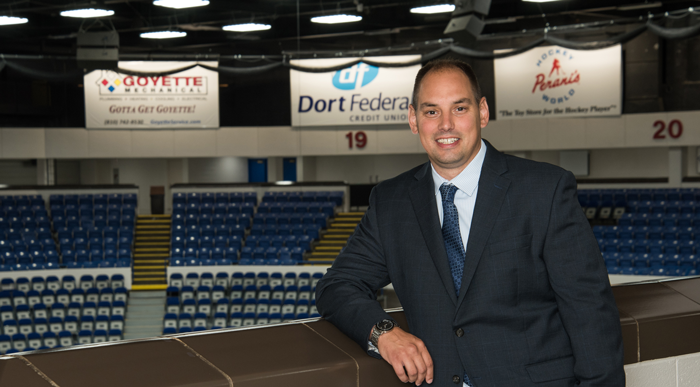 “Hopefully, we will be able to eventually increase the number of fans because they are a critical part of our revenue stream.”

“Right now, that’s what we are looking at and we will be following all the CDC and state health department guidelines when it comes to things like screening, cleaning and making sure people are social distancing,” he said. “Hopefully, we will be able to eventually increase the number of fans because they are a critical part of our revenue stream.”

OHL teams benefit from a small television contract which allows games to be broadcast and streamed on various networks. All Firebirds games are streamed on OHL Live and some are broadcast on Comcast channel 900/Xfinity.

Still, the OHL will be in a difficult position until attendance restrictions are lifted.

“Unlike the major sports, television does not begin to make up for having fewer fans in the stands,” Torrey said. “It’s only a fraction of our annual revenue.”

The majority of players are coming from Ontario and two from Belarus, but Torrey did not anticipate any issues getting them to Flint in time for training camp. The OHL’s three American teams (Flint, Saginaw, Erie) will also be traveling back and forth to Ontario where the other 17 teams are based.

“The OHL has been very diligent in working with governments to iron out travel and immigration details,” he said. “The timeline is for our European players to arrive on November 2 to quarantine for 14 days and then all Canadian players will be here around November 15.”

Torrey added that arena renovations remain on track. Installation of new seating and LED ribbon lighting should be completed prior to the regular-season opener.

Although turnover is inevitable at this level due to age restrictions and players moving on with their careers – more than 20 percent of current NHL players are OHL alumni – Wellwood expects to build on last season’s momentum. 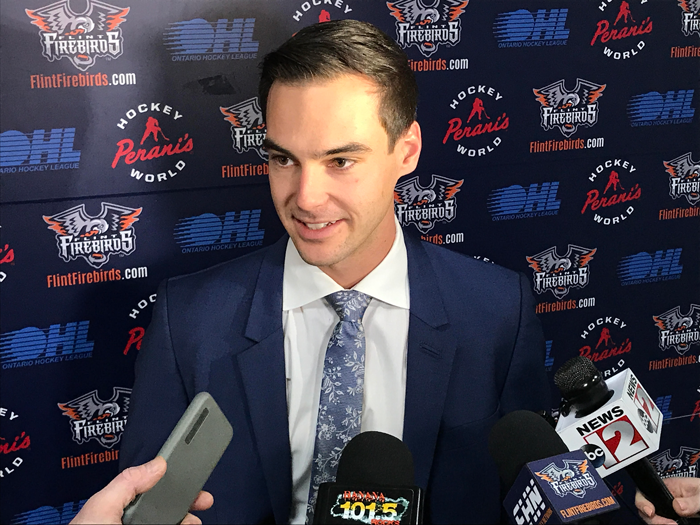 “The great thing about this level is how quickly players can develop year-to-year, so now other guys can step forward and shine. There is no reason we can’t match last season’s success.”

“We came into last season with a different mindset than the year before, knowing we would be a good team,” said the coach, who played in 42 NHL games, including playoffs, with the Philadelphia Flyers between 2011-13. “The guys also played with a chip on their shoulders, wanting to prove they were a much better team than the year before. Everybody is going to come in hungry for more success.”

The roster will not be finalized until after camp begins, but Flint lost its starting goaltender (Anthony Popovich), top defenseman (Riley McCourt) and more than half of its top ten scorers, including Dallas Stars draft pick and Team Captain, Ty Dellandrea.

Plenty of talent was added, however, through the OHL and CHL Import drafts. The Firebirds also acquired Center Sahil Panwar from London and Defenseman Zack Terry from Guelph in trades.

“Despite everything, we had one of the best offseasons in franchise history,” Firebirds Director of Broadcasting and Communications, Dominic Hennig said. “The draft was very successful for us and we added depth in trades. Our top draft pick (Gavin Hayes) could have gone to a number of major colleges, but committed to play here which is a big statement about our organization.”

Top offensive gun Evgeniy Oksentyuk, taken by the Dallas Stars in last month’s NHL Draft, is back. The Belarus native finished with 78 points (33 goals, 45 assists) last season and a plus-13 rating. Oksentyuk was 18th in the OHL in points and ranked among the top 25 in goals, assists and game-winning goals (six). 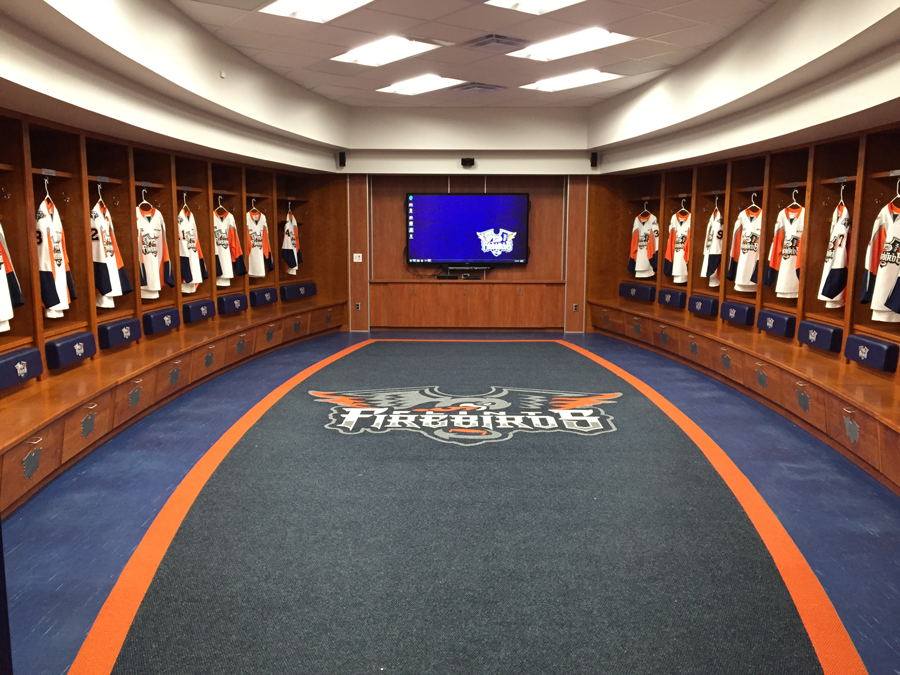 “Oksentyuk has amazing hands and controls the puck while moving at top speed,” the website Last Word on Hockey noted when he was drafted. “He can make moves in a phone booth. Combined with his quickness, these hands make him a nightmare in one-on-one situations. He can make defenders look silly.”

Othmann, who draftsite.com projects will be taken in the first round of next year’s NHL Draft, was named to the OHL All-Rookie first team after racking up a team rookie record 33 points (17 goals, 16 assists).

“Players can really develop between the ages of 16 and 17 and we’re expecting Brennan will be even better this year,” Wellwood said. “He is such an ultra-competitor who goes after the puck and has great vision and hockey sense.”

However, Wellwood is eager to see Luke Cavallin finally become Flint’s No. 1 goaltender is his fourth season with the team. He appeared in 20 games last season and finished with an 11-4-1 record as a starter, a 3.68 goals-against average, 572 saves and an .895 saves percentage.

“Luke will come into camp as the top goalie for the first time,” Wellwood said. “It’s his time. He’s earned it.”

Center Cody Morgan, who was third on the team in assists (43) and fourth in scoring (58 points), returns for a third season.

Last season, Wellwood named a captain and three assistant captains. Forward Ethan Keppen, a fourth-year forward and 2019 Vancouver Canucks draft choice, is the only one slated to be back for sure. He tied for eighth on the team in goals (16) and was tenth in points (31). 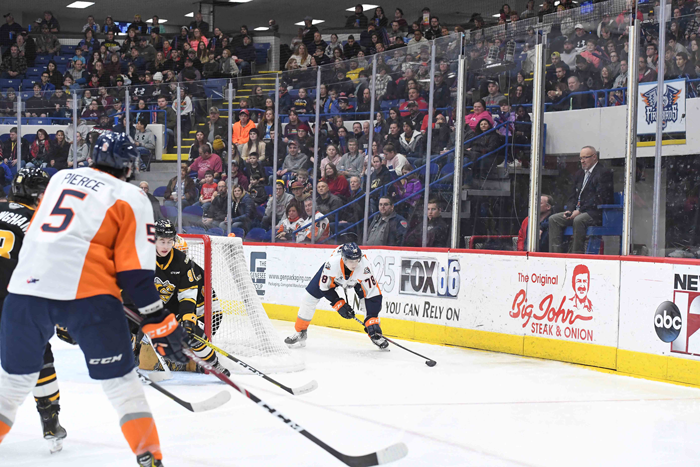 Hayes, a Westland native and 16th overall pick in this year’s OHL Draft, had 16 goals and 17 assists in just 21 games last season with the Detroit Compuware U15 AAA squad.

Nixon posted a 2.00 goals-against average for the Oshawa (Ontario) Minor Generals last season. Kuzmin totaled six goals and 19 assists in 33 games and a plus-34 rating with the Belarus Under-18 National Team.

“The great thing about this level is how quickly players can develop year-to-year, so now other guys can step forward and shine,” Wellwood said. “There is no reason we can’t match last season’s success.” 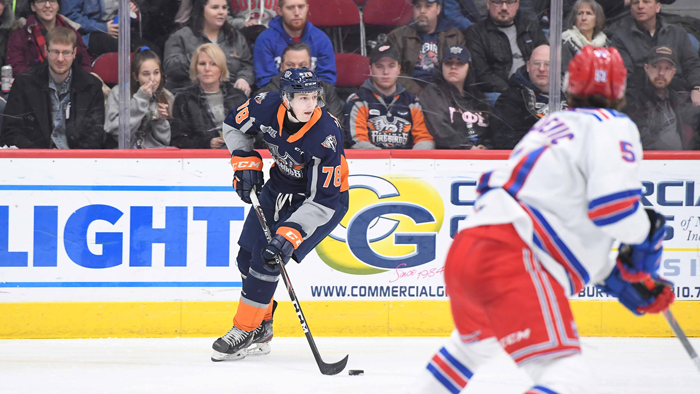 “This year’s team could be even better and we are really excited,” Othmann said. “Coach Wellwood and I had some great talks in the past few months and I love the new ideas he has for the season. I can’t wait to see how much the returning players have developed and what the talented new faces can do.”