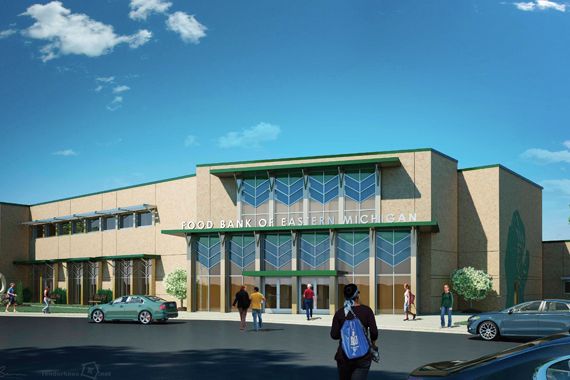 A rendering of the new hunger solution center, scheduled to open September 1, 2014.

There are people in the world so hungry that God cannot appear to them except in the form of bread. – Mahatma Gandhi

Last month, My City Magazine introduced The Food Bank of Eastern Michigan and their mission to end hunger, while attempting to impart to our readers the massive scale of the Food Bank’s operations. This month, we’ll zoom in on some of the programs the Food Bank uses to address hunger in our community and experience their vision for the future through an aggressive expansion plan.

The Food Bank of Eastern Michigan is a giant among food banks, distributing 22 million pounds of food to partner agencies in 2012. Over 6,000 people logged a total of 48,695 volunteer hours last year, unloading, packaging and loading foodstuff for delivery. Given these colossal numbers, it may seem as if the Food Bank is the proverbial giant rather than the shepherd boy with a sling and stone, but consider the statistics about hunger in eastern Michigan: in the 22 counties that the Food Bank serves, 15 percent of the total population – that’s 220,120 people – is food insecure, which means they don’t always know where they will find their next meal.

In addition to these alarming numbers, the impressive volunteer participation aforementioned is actually less than what it could have been. “Right now, we don’t have enough room for all of our volunteers,” says Bill Kerr, Food Bank President/CEO. “We had to turn people away this year.” In addition, only about 27 percent of the food currently distributed by the Food Bank is produce. “The importance of including fresh vegetables and fruits in one’s diet is becoming increasingly clear,” says Bill, “and lack of nutrition in needy folks’ diets is one of the leading causes of obesity, diabetes and hypertension. We want to fill people’s dietary needs, not just fill their stomachs.” Given this knowledge, it seems that the Food Bank still has room to grow.

In order to meet the increasing needs of the communities it serves, the Food Bank’s newest campaign is to renovate its neighboring building. The new facility, which will be called the Hunger Solution Center, will allow the Food Bank to expand their current operations and add additional services and programs; it will also put special emphasis on fresh produce. Right now, there is not room enough to repackage bulk produce into family-sized servings. “In the new building, we will have the space for our volunteers to divide produce into its most efficient sizes, thus assuring that multiple families benefit from the product,” says Bill. Also included in the new building plan is a production kitchen to supply meals to numerous local children’s programs such as Headstart, as well as the Food Bank’s own summer feeding program. Finally, the new space will accommodate an even larger volunteer force, which Bill calls the Food Bank’s “greatest resource.”

According to the 2010 census, 82,570 residents of Genesee County did not know from where their next meal was coming.

As Christmas draws near, now is the time to think about giving to local charities, and what better cause than one that feeds the hungry? In addition to distributing to their partner agencies, the Food Bank of Eastern Michigan has several feeding programs that are making an impact in the community, including the Mobile Food program, the Backpack Meals program, the Kids Café and Summer Food Services, and the Senior Box program.

For over 21 percent of the children in eastern Michigan, hunger is a heart-breaking fact of life. The devastating effect of child hunger on behavior, physical and emotional development, and academic achievement is well documented. The Food Bank’s Backpack Meals program was originally developed in 2004 by a school nurse in Arkansas, who noticed that many kids came to her on Monday mornings with stomach aches and dizziness. These same kids, she noticed, received free or reduced-price lunches from the cafeteria. Then it struck her. These children weren’t eating during the weekend. The movement to feed hungry kids on the weekends has spread throughout the country, and at the request of Feeding America, The Food Bank of Eastern Michigan was one of the first to pilot the Backpack Program. Now, 5,000 local food-insecure children in eastern Michigan receive backpacks containing enough food for the weekend, thanks to the community’s support. A $100 donation provides a child with this weekly food supply for the entire school year.

Another program that is changing the face of hunger in Genesee County is the Senior Box Program. For $200, a food-insecure senior citizen receives a 60-pound box of food each month for a year. With the downturn in the economy, senior citizens across the nation and in our own backyards are faced with bare cupboards and empty refrigerators. “Elderly people are proud. They don’t want to worry their children,” says Tracy Fowler-Johnson, Development Manager at the Food Bank, “but many of them are barely getting by.” Tracy remembers how one woman found an aged neighbor’s dog running loose, and upon returning it to her, accepted an invitation to come in for a cup of coffee. As she put her neighbor’s milk back into the refrigerator, she was appalled to see nothing more inside than a bottle of ketchup. “She called me that day and donated the $200 so her poor neighbor could eat,” Tracy said with tears in her eyes.

These are just two ways that members of the community can directly address rampant local hunger. If you’re feeling called to help the Food Bank, you can be assured that donations of every size have a huge impact because of the organization’s efficiency. Even a single dollar equates to six meals for a hungry man, woman or child. This season, the Holiday Ornament Program allows individuals and companies to participate in the Food Bank’s mission by purchasing a paper ornament for one dollar. Contact the Food Bank of Eastern Michigan to get involved in this or one of their other programs, today.

“The Hunger Solution center will not only double our capacity, it will place prominence on fresh food, allow us to triple our volunteer work areas, and make room for new programs! The production kitchen in particular is going to revolutionize our summer programs!”
Tracy Fowler-Johnson
Development Manager

December is a time for family, celebrations, and of course, good food. But let’s not forget those who go hungry this month; partnering with the Food Bank is one way to change the face of hunger forever, dollar by dollar.

Are you interested in purchasing photos from this story? Go HERE and select the “Food Bank” category.