“Four things belong to a judge: To hear cautiously, to answer wisely, to consider soberly, to decide impartially.”
~Socrates

This year, Honorable Duncan M. Beagle celebrates 25 years on the bench. He is currently one of five Family Court judges in Genesee County. He also presides over three specialty courts — a Drug Court for neglect parents, an Attendance Court for severely truant students and ADAPT Court to improve efficiency of increased number of paternity cases. And 1991 was a significant year for him. Not only was he appointed Circuit Court Judge by Governor John Engler, it was also the year he married his lovely wife, Dana – and the year he lost the ability to use his legs due to an illness and became wheelchair bound. 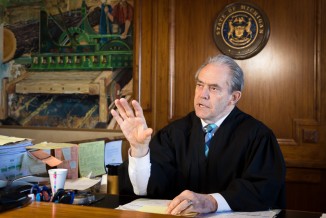 Born and raised in Flint, Judge Beagle graduated from Southwestern High School, Albion College, and the University of Detroit Law School. He is a third-generation attorney; his grandfather, Charles D. Beagle, was a former Genesee County Prosecutor and attorney, and his father, John S. Beagle, affectionately known as “Legal Beagle” was also an attorney. Both practiced law for over 50 years. “I’m the first judge in the family,” says Judge Beagle. “I never wanted to be a lawyer when I grew up, but my father, who was a very driven, hardworking man, told me I should consider it.” After taking his father’s advice and finishing law school, he worked as an assistant prosecutor and practiced privately from 1982 to 1991. He and Dana have one son, Devon, who is 21.

“I love working with people and coming up with a solution.”
Judge Beagle

My City Magazine spent a Tuesday afternoon with the busy judge to talk about his interesting life and busy days in a Genesee County courtroom.

On a typical morning, Judge Beagle will handle eight to 12 domestic mandatory settlement conferences. Having been a judge in the Family Division since 1998, he deals with all family-related issues. “I volunteered to do it,” he says. “In the Family Division, we deal with human emotions.” What he likes best about his job is interacting with people. “I love working with people and coming up with a solution,” he says. If the case can’t be settled in a conference, he goes to the courtroom and makes a decision.

His days are made much easier with the help of his secretary, Dawne Nicholas, who has been with him the entire 25 years. “She is loyal and protective of her boss,” says Judge Beagle, “and she is good at what she does. The day she retires is when I will retire.” 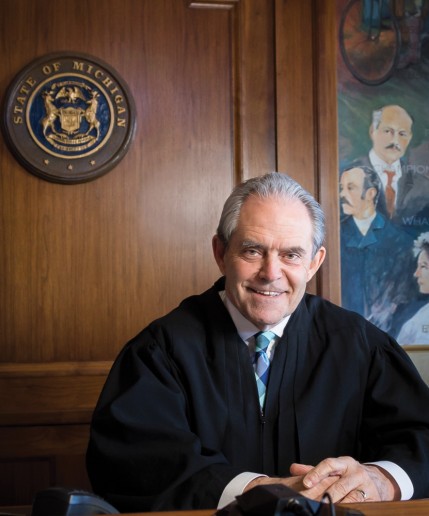 In the afternoon, there are eight to 12 juvenile neglect pre-trial conferences. One weekday is set aside as Motion Day. Some days are reserved for non-jury trials and contested hearings. While he has some jury trials, he settles 99 percent of his cases; about half are resolved in his office and the other half is decided in the courtroom. Family cases that come before Judge Beagle include divorce, neglect, delinquency, paternity, custody, parent time, spousal support, and property division. Cases involving domestic violence can be quite dramatic. “Some people just want to fight or get even, or they want the fight to continue. It gets really emotional, especially when children are involved,” he says.

On the wall in Judge Beagle’s office is a plaque given to him by a dear friend, retired Judge, Tom Yeotis. It is inscribed with the words of Socrates: Four things belong to a judge: To hear cautiously, to answer wisely, to consider soberly, to decide impartially. And when the judge is having a difficult day in the courtroom, he often takes a minute to read it. “Sometimes, you have to remind yourself of the basics,” he says.

For Judge Beagle, a typical day wraps up around 5:30pm. “On the drive home, I ask myself, ‘Did I treat the folks in front of me appropriately today? Could I have done better?’”

In the evening, he enjoys spending time with his wife. Judge Beagle is a big sports fan and he and Dana like attending sporting events and concerts. “My wife turned me into a Bruce Springsteen fan,” he says with a smile. He is also active in the community, serving on several non-profit boards, including Flint Rotary Club. He is most proud of his work as chairperson of the Atwood Stadium Authority, which helped preserve the stadium before it was turned over to Kettering University in 2014.

Judge Beagle is combining his love of baseball and the law to write a play about Shoeless Joe Jackson, a famous player for the Chicago White Sox in the early 1900s. “He was banned from baseball,” Judge Beagle explains. “He got caught gambling and allegedly took money to throw a game. The Commissioner of Baseball at the time was Kenneshaw Mountain Landis, who was previously a judge.”

Judge Beagle has led an interesting life and has never allowed his physical challenges to slow him down. “I had two choices: I could sit there and feel sorry for myself, or I could pick up the pieces and move forward,” he says. A turning point came during a physical therapy session at U of M Hospital in Ann Arbor. A man was there who was paralyzed from the neck, down. “After realizing the limitations he faced, I realized how lucky I was,” says the judge. “It changed my attitude.” What does he miss the most? “I miss dancing with my wife and officiating basketball games.” Luckily, Dana has always been very supportive. “I have so much respect for my wife,” he shares. “She has stood by me through the toughest times.”

Dana recently discovered an innovative medical doctor in Cleveland, who has been treating her husband, and has given them much hope. “I now have some feeling and movement in my legs,” he says. “My wife’s dream – and mine – is that I may walk again one day.” 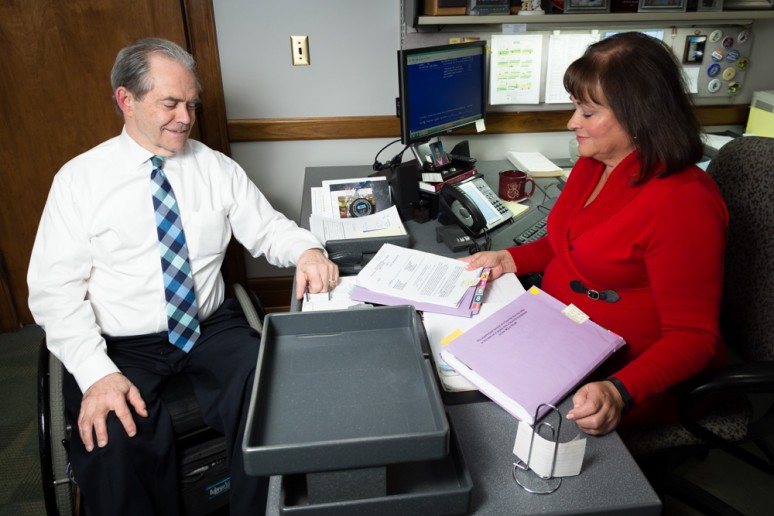 Of his secretary, Dawne Nicholas, Judge Beagle says, “She is good at what she does. The day she retires is when I will retire.”