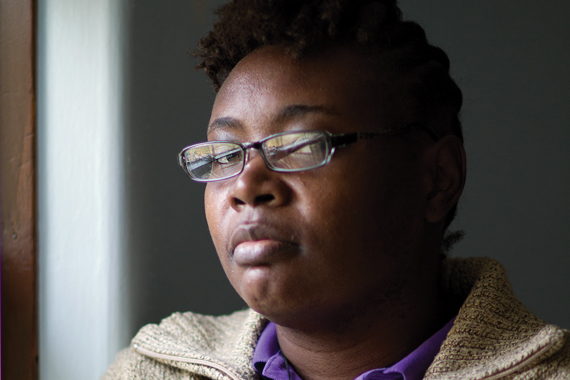 Shannon arrived at Shelter of Flint with her twin boys in November of 2011. It was her second time there – a relatively rare occurrence in the shelter’s highly successful program. “I had been at the shelter once before, about three years prior. My house had burned down, but since I was employed, I was only there for 30 days,” she recalled. When she came to the shelter the second time, Shannon was unemployed … and at the end of her rope.

As she got settled in at the shelter, she had a meeting with her caseworker, who made an unexpected suggestion. “Tonya recommended that I look at going back to school. I found out that I was eligible for funds from the GI Bill due to my past service in the Army,” Shannon explained, “and even though I was nervous to start college at the age of 36 with two ten-year-old kids, I felt that this was a second chance for me.”

Shannon moved to Shelter of Flint’s transitional housing while working and taking classes online. “I did my homework at the dinner table right next to my children,” she laughed. She remembers her boys having difficulty adjusting to all of the changes, but in the end, she says they have all benefitted from it. “One of my sons is dyslexic,” she said, “and though he was in fifth grade, he read at a first grade level. Through my connections at the shelter, he received tutoring, and now he’s caught up with the rest of his classmates.” Shannon says that the while the resources provided by Shelter of Flint were important, it was the emotional support that was life-changing. “One day, I woke up and realized that I wanted to be different. I cut off all of my hair, which had been treated and colored, and I went natural. My sister thought I was crazy, but I’m proud of the new me.” Anne Grantner, Executive Director at Shelter of Flint, says that the most important service that the shelter can provide is an opportunity for self-revelation. “People need to recognize that they can break the cycle and have a different life. We push them, but ultimately, they have to realize for themselves that they have opportunity, hope and a future.”

Although the journey was arduous, Shannon will receive her Associate’s Degree in Medical Billing and Coding from AmeriTech College in March; but it doesn’t end there. In the fall, Shannon will enter the business program at the University of Michigan-Flint. “I want to help people with their insurance needs, and I will continue my education until I have a master’s,” she said determinedly. Shannon’s hard work – which has earned her a perfect 4.0 GPA and a spot on the Dean’s List – is inspiring her family to aim high, too. “My sister is now going back to college because of what she’s seen me do, and her son also challenges himself because of me. He’s always saying, ‘If you did it, I have to do it better,’” Shannon laughed. “I even have bumper stickers now proclaiming that my kids are honor roll students!”

As she prepares to leave the shelter’s transitional program, Shannon says that she is excited for all of the opportunities that now lie ahead of her. “When you don’t have a stable environment, you’re in crisis mode. You live from moment to moment, without the ability to make goals,” Shannon says. “Now, I wake up every morning and make a goal for what I want to accomplish that day. Being here has opened so many doors, not only for me, but for my kids.” Anne says of Shannon’s journey, “Shannon is on her way up, and that’s what we do here: we help people up. She’s changed her life and become a role model for every other person who comes through the shelter.”

Shannon is not shy about wanting to make a positive impact: “I will never stop giving back to Shelter of Flint. They changed my life.” Shannon is always willing to volunteer, and the staff has come to rely on her unfailing devotion. “If they need someone at the front desk, I’ll answer the phone. If Miss Eddington is sick, I’ll work in the kitchen. Anything that I can do to give back to the people who have given so much to me, I do,” she says.